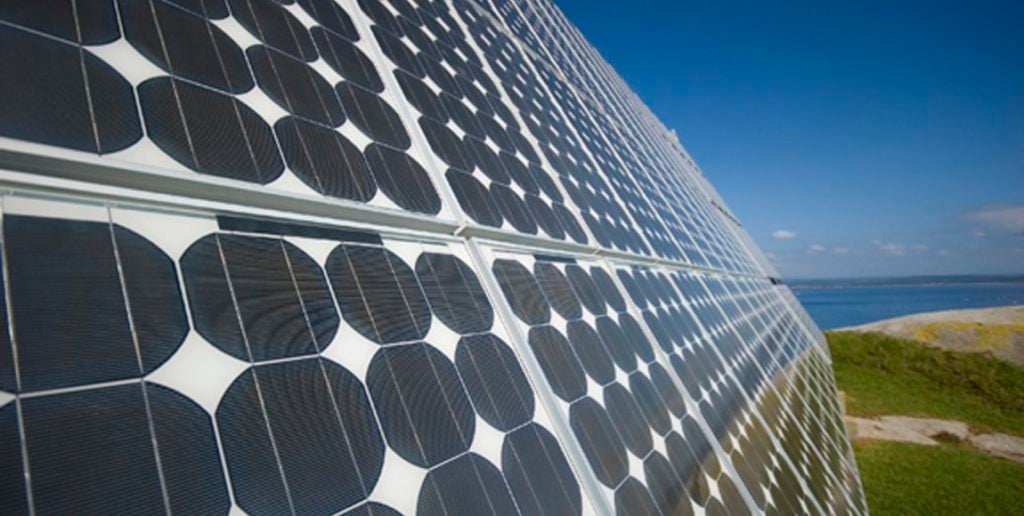 The collection of thermal radiation from the sun is relatively easy, and involves the use of a fluid passing through a heat sink exposed to sunlight. The circulated fluid can be used as a heat source, or if concentrated, be used to turn a wheel or turbine to generate electricity. Photovoltaic cells derive electrical current by using sophisticated semiconductors to convert photons into electrons.

Solar energy has played a minor role in the US since the advent of industrialization although prior to that, the photosynthetic conversion of solar energy into plant life was the basis for dominant biomass energy sources—wood for heating and fodder for horse-powered transportation.

Today, solar energy provides five-tenths of 1 percent of the total energy consumed in the United States.[1] While the amount of utility-scale solar electricity capacity in the US has increased in recent years—rising from 334 megawatts in 1997 to 13,406 megawatts in 2015, it still only accounts for 0.6% of net utility-scale electricity generated in the United States – the least among the renewable sources of hydroelectric, biomass, wind and solar. However, if rooftop solar panels and other solar lighting in the residential, commercial and industrial sectors were included in the generation statistics, total solar generated electricity in the US would represent a larger, but still small share. The Energy Information Administration (EIA) estimates distributed solar capacity at 8,379 megawatts in 2015 and distributed solar generation as 12,141 million kilowatt hours. Once EIA includes distributed solar in their statistics, solar power’s share of generation should increase to 0.9 percent. [2] 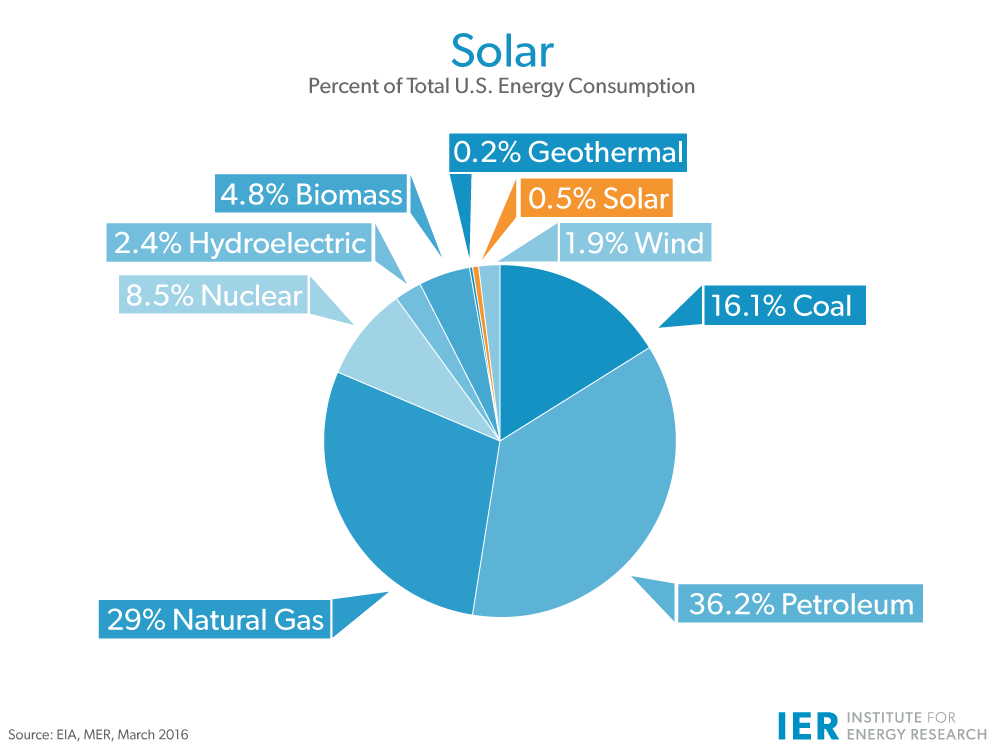 Efforts to expand solar capacity face several challenges. One of the most significant impediments to solar power, like wind power, involves the availability of its source. Solar radiation is rarely constant and varies with changing atmospheric conditions (clouds and dust), and the changing position of the Earth relative to the sun (day and night). Solar energy is also relatively weak because it must first pass through the atmosphere, which protects the Earth from the sun’s intensity. As such, the intermittent and variable manner in which solar energy arrives on the Earth’s surface means it creates reliability problems. This necessitates some form of back-up energy system to be installed for when the sun is not shining or the weather is adverse.

Though solar technologies are improving, meeting current US electricity needs with today’s photovoltaic technology would require about 10,000 square miles of solar panels—an area the size of New Hampshire and Rhode Island combined. Moreover, if photovoltaic power is established in those areas of the country like the desert southwest where sunshine is abundant, consideration must be made for transmission lines as well as the “line loss” that accompanies electrical transmission over great distances. 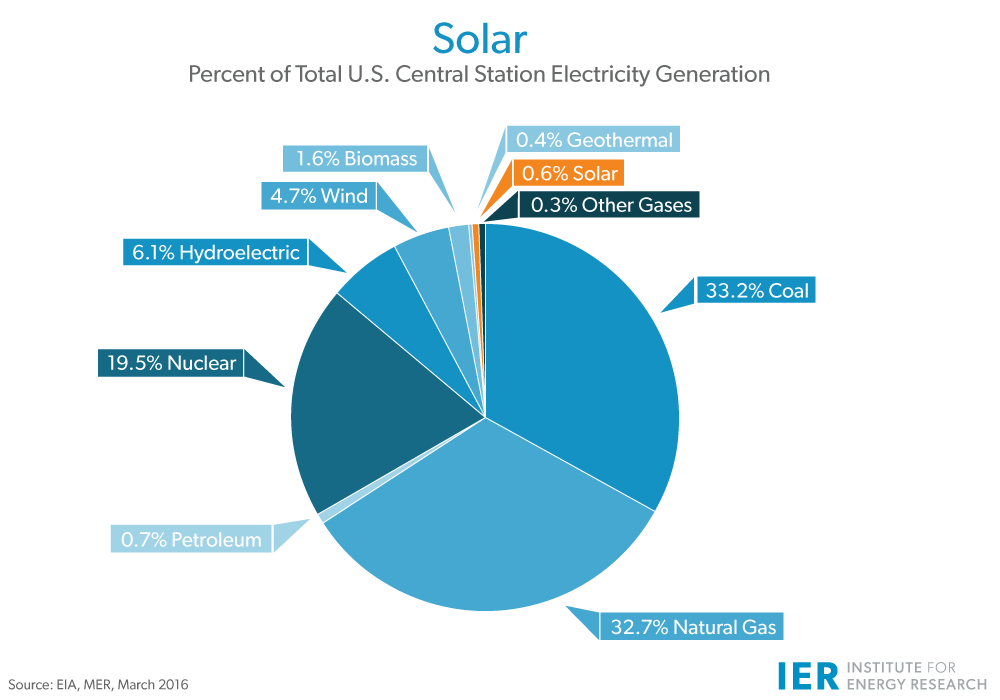 As electricity is transmitted along power lines, a substantial amount of the produced power is lost, and the longer the transit, the more the loss. Although solar energy is fueled freely by the sun, the cost of the technology relative to the amount of energy produced makes solar significantly more expensive than other more widely used energy sources. Further, often the costs of requiring back-up energy are not generally included in the assumed production costs of solar energy, making comparisons of true production costs with other energy sources even more difficult.

Solar energy has proven well-suited to a number of site-specific applications where a remote location can be serviced by electricity generated through photovoltaics and consumed without any line loss. Because it also saves on the costs of building transmission lines to supply power, the economics of this type of solar energy improve greatly. On a small scale, many Americans are familiar with this concept because of solar powered yard lighting that similarly obviates the need for electrical wiring.

For the foreseeable future, solar energy is likely to make up a very small part of our overall energy mix because its costs and reliability place it at a disadvantage to other forms of electrical generation. However, it may gain favor in isolated applications for certain uses, and its use has been growing as government mandates compel consumers to use more renewable forms of energy without regard to cost. 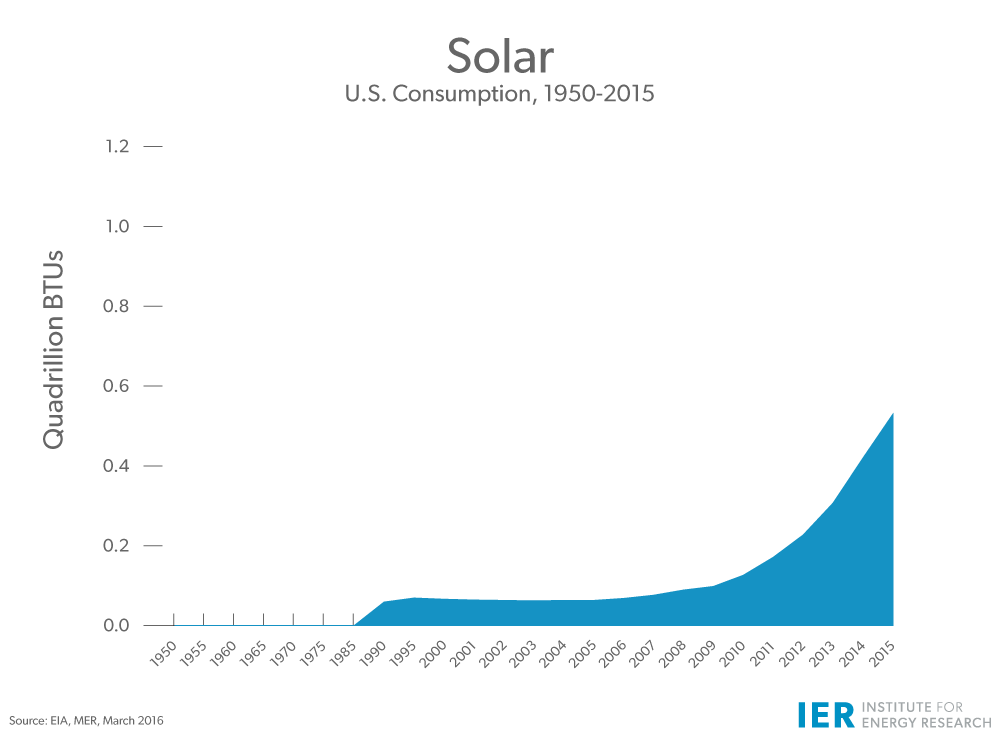 [1] IER uses the same definitions as the U.S. Energy Information Administration when calculating energy consumption and electricity generation by source.