As the Obama administration launches into its second term, carbon tax proposals are surfacing in Congress that threaten to completely derail any hope of a true economic recovery. The Institute for Energy Research is dedicated to free market energy policies that allow consumers and economic growth to thrive. Nothing is more important for your family’s budget and American prosperity than access to affordable, reliable energy, and nothing could be more devastating for those goals than a carbon tax. IER has recently published a study and a survey to aid policymakers and educate the public about the dangers of carbon tax proposals, most notably carbon tax “swap” deals that attempt to hide behind budget-neutral rhetoric. These studies are consolidated here and are available to download as PDFs. 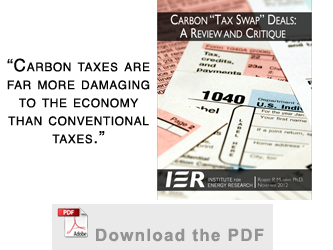 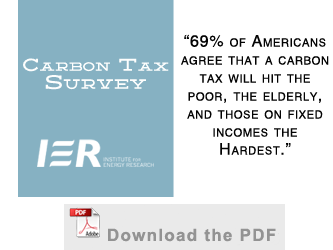 About Carbon Tax “Swaps” and the Dangers of  a Carbon Tax

The Institute for Energy Research released a new study, November 2012, exposing the fallacies of so-called revenue-neutral carbon tax swaps, an idea that has gained some support among even conservative pundits and politicians despite numerous theoretical and practical problems with the scheme. IER Senior Economist Robert P. Murphy reveals in the study, entitled “Carbon ‘Tax Swap’ Deals: A Review and Critique,” that pro-carbon tax discussions currently underway inside Washington may offer a ‘cure worse than the disease,’ robbing global economies of growth potential and disproportionately affecting the world’s poor.

About the Carbon Tax Survey

A survey conducted by the Institute for Energy Research, January 2013, concludes that voters overwhelmingly oppose a carbon tax, understand that such a tax will increase energy prices, and know that the idea of a tax swap is ridiculous. IER President Thomas J. Pyle said the following:

“These survey results are further proof that voters are wiser than many people in Washington. Voters know that a carbon tax will raise energy prices, will damage the economy, will hurt the poor and those on fixed incomes the most, and, if enacted, will result in higher taxes rather than some sort of tax swap. The fact that 67% of the respondents oppose a carbon tax is encouraging; it means that voters have not been deceived by those who favor imposing an energy tax.”

“Much like the cap and trade charade, I look forward to joining forces with the majority of the American people to defeat the creation of and imposition of a job-killing, economy-wrecking carbon tax.”

Highlights of the survey:

The survey was conducted by MWR Strategies in December 2012 among 1000 registered voters.  It has a margin of error of 3.1%.