President Obama received another commitment from a developing country last week for the United Nations climate conference in Paris in December. This time it is from the third largest greenhouse gas emitter in the world—India. However, as is the case with China’s commitment[1], India will still emit more and more carbon dioxide through 2030. India will just slow its carbon dioxide intensity—the amount of carbon dioxide it emits per unit of GDP.

Thirty-one percent of India’s electricity capacity (2 percent nuclear, 16 percent hydro, 13 percent other renewables) and 28 percent of its electric generation is currently from non-fossil-fuel sources. Reaching 40 percent over the next 15 years is probably not much of a stretch since India plans to have 63,000 megawatts of nuclear power capacity on line by 2032 — an almost 14-fold increase from current levels. India has 22 nuclear reactors and plans to build 40 more. 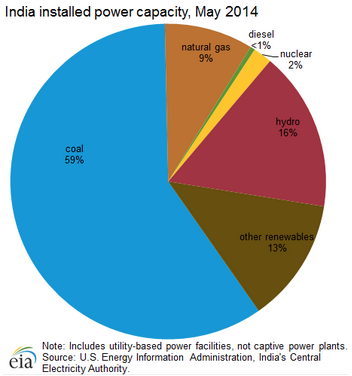 Further, India intends to obtain technology transfers from other countries, as well as aid from the Green Climate Fund that was established by the United Nations to solicit donations from wealthy countries to help poor countries adapt their economies to lower-carbon technologies. The Obama Administration committed $4 billion earlier this year to subsidize solar development in India—the U.S. Trade and Development Agency plans to provide $2 billion in loans for solar energy, the U.S. Overseas Private Investment Corporation is providing $1 billion, and the U.S. Export-Import Bank is to provide an additional $1 billion.[6]

India’s top priority, however, is to provide power to its 400 million people who do not have electricity or clean cooking fuel.[7] An estimated 400 million Indians–roughly 31 percent of the country’s population—lack access to electricity.  And those that have access regularly experience rolling blackouts, power outages, and curtailments. India is the third largest consumer of electricity in the world, behind China and the United States.[8] For this reason, India is also building coal-fired power plants. India had 114,782 megawatts of coal-fired capacity as of May 31, 2012 with an additional 87,122 megawatts under construction.[9] Indian Power Minister Goyal sees coal as playing an “essential role” in his $250 billion plan to provide “Power for All” by 2019. According to the International Energy Agency, coal is expected to increase from 43 percent of India’s total energy supply today to 46 percent in 2020 and 51 percent in 2035 and to maintain 68 percent of the electricity generation market as its demand grows.[10] 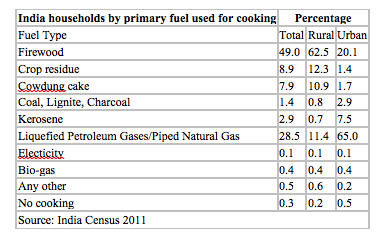 The World Health Organization estimates that some 3 billion people worldwide cook or heat their homes “on open fires or traditional stoves,” causing an estimated 4.3 million deaths per year from indoor air pollution.[12]

India wants its economy to continue to grow and expects it to increase by a factor of 7 by 2030, compared with 2005 levels.

Last November, President Obama pledged that the United States would reduce its net greenhouse gas emissions by 26 to 28 percent below 2005 levels by 2025. A major part of his plan to get to that level is EPA’s so-called “Clean Power Plan” that requires electric utilities to reduce their carbon dioxide emissions by 32 percent from 2005 levels by 2030. The Energy Information Administration found that under the proposed “Clean Power Plan” and other finalized EPA regulations affecting the electric generating industry, residential electricity prices would increase 16 percent from today’s levels by 2030. In other words, consumers would be paying for the commitment with much higher electricity prices.

Further, under President Obama’s fiscal 2016 budget proposal, tax credits for renewables would become permanent if passed by Congress, meaning that taxpayers would foot a major part of the transition from fossil-fired generating plants to renewable energy plants over the next 15 years required to comply with the “Clean Power Plan.” Using EPA climate models, the CATO Institute found that compliance with the “Clean Power Plan” would only reduce temperatures by .019 degrees Celsius by 2100—a minuscule amount.

Despite China and India submitting plans, the goal set by the United Nations is far from being met. Last week, 51 countries filed their climate action plans before the October 1 deadline set for the Paris climate summit in December. Altogether, over 130 nations accounting for about 85 percent of global greenhouse gas emissions have filed plans. Those plans, if implemented, however, would be short of the goal by 2.7 degrees Celsius according to the Climate Action Tracker, which is the most optimistic of the groups tracking country commitments. About 50 countries that account for more than 10 percent of global emissions, including major oil producing countries, did not submit plans. The top emitters that did not submit plans include Bolivia, Iran, Saudi Arabia, Sudan, Pakistan, Nigeria, Egypt, Venezuela and Malaysia.[13] Obviously, if two of the top 3 emitting countries in the world continue to increase their greenhouse gases, then it is unlikely that any temperature target can be reached. Thus, countries truly reducing their emissions are only seeing prices escalate for no real gain.

Despite President Obama meeting with the heads of China and India to obtain commitments to reduce greenhouse gas emissions, both countries intend to increase those emissions through 2030 in order to continue to grow their economies and to provide electricity to areas without it. U.S. consumers, however, will be paying heavily for their electricity in the future due to President Obama’s commitments for this country, despite the fact that our reductions will do practically nothing to decrease temperatures by 2100. Our reductions will be a drop in the bucket compared to the increased greenhouse gases that China and India will emit while growing their economies. Under this plan, the United States will be the third largest emitter of carbon dioxide in the world in 2030, after China and India. Time will tell what being in third place will mean for our economic status in the world.

[8] The Energy Collective, A Solution for Rural India, June 4, 2015, http://www.theenergycollective.com/charlie-hewitt/2235911/solar-microgrids-solution-rural-india

Ozone Rule a Gut Punch to Poor and Middle Class