In a previous post, I outlined some of the key points from the climate science in the new CATO Working Paper on carbon taxes that I co-authored with climate scientists Pat Michaels and Paul Knappenberger. For long-time IER readers, much of the analysis is familiar, as we covered it extensively in our Comment on the Social Cost of Carbon.

However, we also included new research on the economic evidence against a carbon tax. I’ll summarize some of the key points in this post.

Is a Carbon Tax a “Market Solution”?

Especially among the small but vocal group of analysts urging carbon taxes to a conservative and libertarian audience, there is a rhetorical technique of casting a carbon tax as a “market solution” that reflects libertarian principles. The idea here is that greenhouse gas emissions are a “negative externality” and represent a violation of the property rights of third parties. Therefore, so the claim goes, imposing a federal carbon tax is just a way of making companies pay the full cost of their actions. What kind of libertarian could oppose that?

But hold on a second. This “market failure” analysis is sorely lacking. We show this in our CATO paper by drawing an analogy to a historical episode where property rights were lacking and resulted in a clear market failure:

[E]ven on its own terms, a carbon tax is hardly a genuine “market solution” analogous to other introductions of property rights. The classic “tragedy of the commons” involved animals overgrazing on English pastureland, and this problem was solved by establishing private property in real estate (enforced at low costs via barbed wire fencing). But if we were to implement a “market solution” in the spirit of a carbon tax, the English government would have fined only English ranchers and shepherds a certain number of guineas for every acre‐year of grazing by their animals, with that fine periodically adjusted based on the whims of Parliament, and where any non‐English rancher or farmer could let his animals graze on English pastureland without paying anything to the government. (No fences would be allowed to restrict foreign ranchers, who fell outside the jurisdiction of the English government, from coming into England and grazing on the land that the English were trying to preserve for the future.) Would this be a “market solution” to the original tragedy of the commons? [Murphy, Michaels, and Knappenberger p. 25]

In other words, it is hardly fixing a “missing market” in atmospheric levels of CO2 by giving political officials in DC the ability to set a tax rate on US emissions. If we applied this attempted justification of a carbon tax to other areas, it would be obvious that it was merely a political program with its own suite of problems, rather than a “market solution.”

The Alleged Success of the British Columbia Carbon Tax

For years, proponents of a US carbon tax have pointed to the example of British Columbia. Its provincial carbon tax was designed to be revenue-neutral (though I know colleagues who are working on a study disputing whether it has achieved this in practice), and its fans claim that BC has done quite well economically since the carbon tax was implemented in July 2008. Thus, fans of a carbon tax say that it has led to a significant drop in emissions (as evidenced for example in gasoline sales) while leaving the economy unscathed. What’s not to like?

Again, not so fast. First, the latest data show that—for whatever reason—the initial and sharp drop in gasoline sales in BC has largely reversed itself. Here is the relevant figure from our CATO paper: 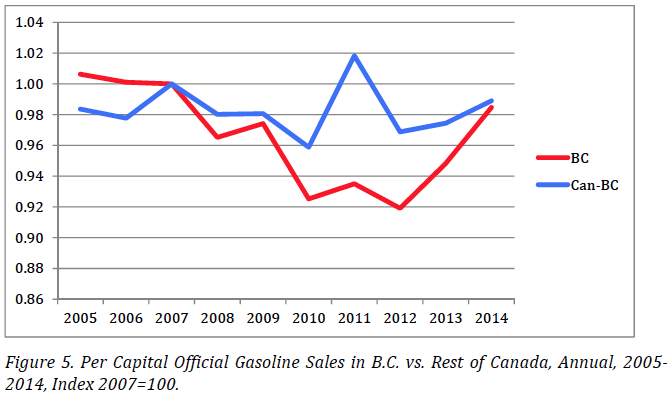 As the reproduced Figure 5 shows, although there was an initial gap that came in after the mid-2008 introduction of the BC carbon tax, as of 2014 data per capita sales of gasoline in British Columbia were virtually identical to the rest of Canada. Analysts are still not sure exactly what happened, but it might be something as simple as that British Columbia drivers originally responded to the new (and highly publicized) carbon tax by adjusting their behavior, but after a few years they realized it was more convenient to keep driving and just pay the extra price at the pump.

It gets worse. Not only does it appears that the BC carbon tax has, in the long run, led to trivial reductions in gasoline consumption among BC residents, but it’s also apparently hurt the BC economy.

The reason we (in our CATO paper) reached a different conclusion from the pro-carbon tax writers is that the latter merely compared the post-2008 BC economic performance to the rest of Canada. But that’s not the right comparison, because what if prior to the 2008 carbon tax the province of British Columbia had been doing much better than the rest of Canada?

Indeed that seems to be what actually happened. The reproduced Figure 6 below shows the story: 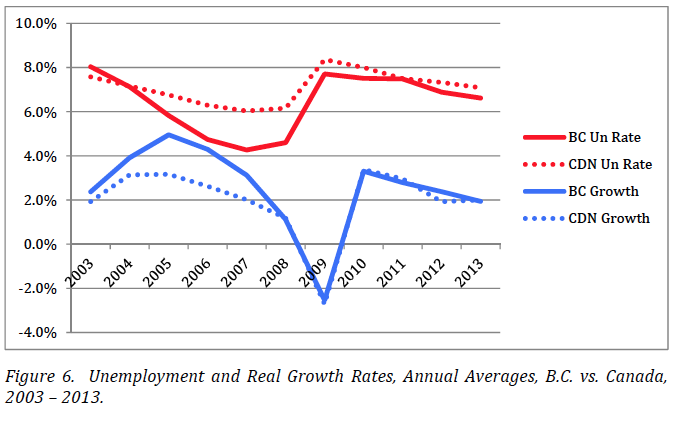 In Figure 6, the red lines show the unemployment rate, both in British Columbia (solid) and Canada as a whole (dotted). It is clear that for four years prior to the 2008 introduction of the BC carbon tax, there was a gap between BC and Canadian unemployment, which was about 2 percentage points in 2007. But after passage of the BC carbon tax, that gap largely evaporated.

We see a similar pattern with GDP growth, depicted by the blue lines. Prior to 2008, BC enjoyed significantly higher economic growth than the Canadian average.[i] Yet since the mid-2008 introduction of the carbon tax, BC and Canada have experienced virtually identical rates of economic growth.

In this context, we can see how misleading it is for fans of the BC carbon tax to argue that it has had no ill effect on the province, since it has matched the country overall. This benchmark is unsuitable, because before the 2008 BC carbon tax, the province had performed much better than the rest of Canada, at least if we look at either the unemployment rate or rate of GDP growth.

In this post, I have summarized just some of the new arguments and evidence that Pat Michaels, Paul Knappenberger, and I developed in our new CATO Working Paper. True policy wonks should read our whole paper, as it provides a thorough demonstration that the alleged “no brainer” case for a US carbon tax is much weaker than its glib proponents would have us believe.

[i] For the unemployment and GDP growth rates comparing BC versus Canada, the benchmark was Canada as a whole, rather than “Canada minus BC.”