While the United States is closing coal mines, India is opening a coal mine a month in order to double production by 2020. Its goal is to produce 1.5 billion metric tons of coal by 2020, exceeding U.S. coal production, and becoming the second largest coal producer in the world, after China. Coal will remain the major source of energy in India despite its pledge to the United Nations to reduce its greenhouse gas intensity, build more non-fossil-fuel generating plants, and plant more trees to absorb up to 3 billion metric tons of carbon dioxide. India has rejected any absolute cuts to the amount of carbon dioxide that it emits because it needs coal to grow its economy and to beat poverty. By 2025, it is expected the India will replace the United States as the second largest emitter of carbon dioxide.[i]

Coal is India’s primary energy source. The country has the world’s fifth-largest coal reserves (60.6 billion metric tons), behind the United States, Russia, China, and Australia. It currently ranks third in terms of both production and consumption. In 2014, India produced 644 million metric tons of coal, 29 percent less than the United States.[ii] Despite doubling its production between 1999 and 2014, India does not produce enough coal to meet its energy needs and imports coal mainly from Indonesia, Australia, and South Africa. (See charts below.) 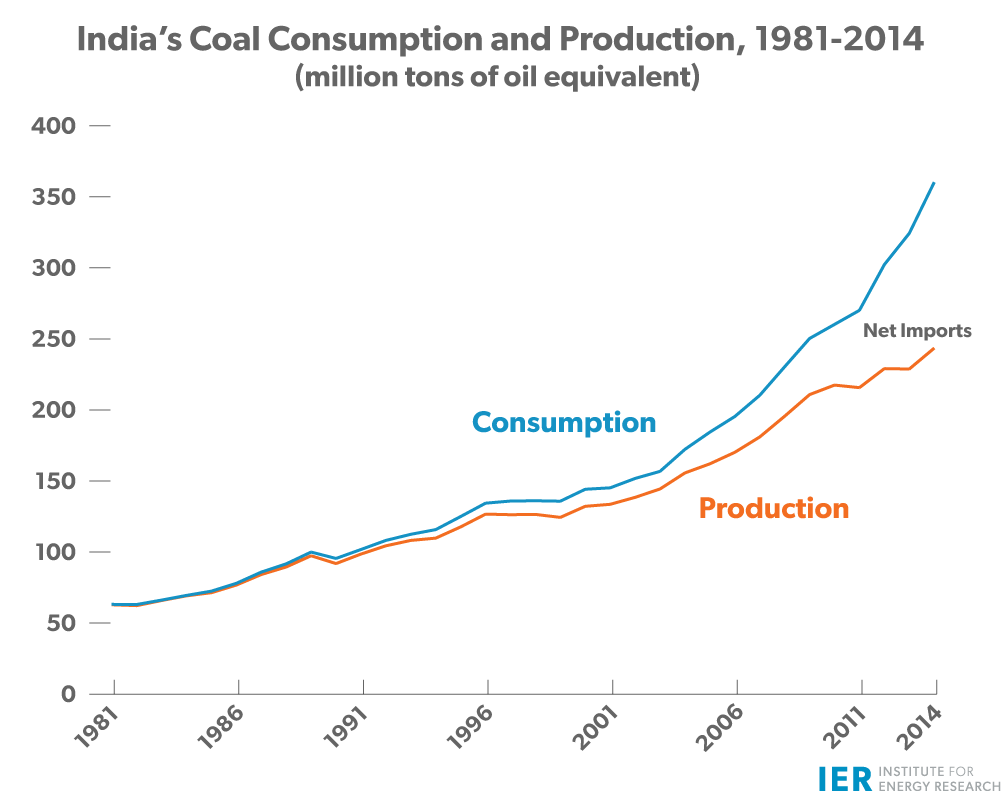 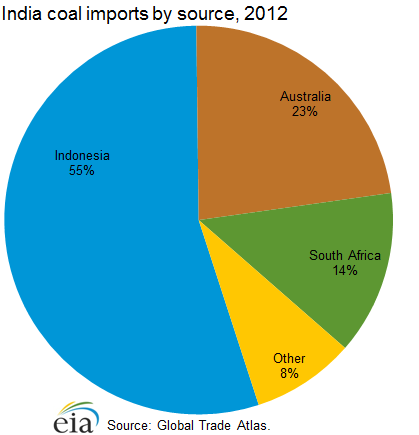 Most of India’s coal reserves are located in the eastern parts of the country. According to the International Energy Agency, Jharkhand, Chhattisgarh, and Odisha account for about 64 percent of the country’s coal reserves. Other significant coal-producing states include West Bengal, Andhra Pradesh, Madhya Pradesh, and Maharashtra.[iii]

Last month, India started producing coal at a new mine in Magadh that it hopes will be Asia’s largest coal mine in five years. The coal mine, located on 44,500 acres, will supply a large power plant being built nearby. A second large coal mine was opened last year about 20 kilometers away and another two mines will open nearby by 2018. Combined, the mines in this one district are expected to produce as much coal as Poland–the world’s ninth largest coal producer.

Indian coal typically has high ash, low sulfur content, and a low-to-medium calorific value. Because of its low-quality, twice as much Indian coal is needed to produce the same amount of energy as the best Australian coal. If India burns as much coal by 2020 as planned, its carbon dioxide emissions could as much as double to 5.2 billion metric tons per year — about a sixth of all the carbon dioxide released into the atmosphere last year.

Asia is Heavily into Coal

According to the World Coal Association, China, India and Indonesia consume 71 percent of the world’s newly mined coal. Other Asian nations are also looking to power their economies with coal. For example, Pakistan, the Philippines and Vietnam are opening new coal plants. The Asia/Pacific region accounts for 80 percent of new coal-fired power plants globally. Japan’s coal consumption reached a record after it closed its nuclear units due to the accident at Fukushima caused by the tsunami and it plans to build another 41 new coal-fired units over the next decade.

Besides consuming coal, Australia is a large exporter of coal to Asia. Its exports of thermal coal rose 5 percent to 205 million metric tons in the last financial year and are expected to increase by an additional one million metric tons this year, driven by increased demand from Japan, South Korea and Taiwan.

Coal Production, Consumption, and Mine Closures in the United States

According to data from the Mine Safety and Health Administration (MSHA), the number of operating coal mines in the United States fell to 1,701 in 2013, from 1,944 in 2010—a drop of 13 percent. An analysis of MSHA data by SNL Financial indicates that since the fourth quarter of 2011, average coal mining employment has dropped by more than 17,000 jobs through the first quarter of 2014. Nearly 14,300 of those jobs (84 percent) were in Appalachian coal mines.[v]

Some examples of recent company closures include:

In December 2014, PacifiCorp—a subsidiary of Warren Buffet’s Berkshire Hathaway—announced it would be closing its Deer Creek mine in Emery County, Utah early next year. The mine, which feeds PacifiCorp’s Huntington power plant via a 2.4-mile conveyor belt, employs 182 workers and is the only union mine remaining in Utah.

India has very cleverly submitted a plan to the U.N. conference that will take place in Paris later this year that allows them to continue releasing carbon dioxide emissions to the point of tripling their release by 2030. China and India’s increase in carbon dioxide emissions will dwarf the reductions in the United States. Yet, Americans are being asked by President Obama to pay higher electricity costs because existing coal-fired power plants in this country are being shuttered and replaced with substantially higher cost renewable plants. According to a recent study by IER, the costs for new renewable plants are around 3 times as high as existing coal-fired plants. [vi] The resulting coal mine closures are costing thousands of Americans their jobs.

India and other countries in Asia know that coal is the most cost effective source of generation and are using that energy source to build their economies and to beat poverty in their countries. India, with the fifth highest coal reserves in the world, is opening a coal mine a month and expects to surpass the United States in coal production by 2020. The United States, in contrast, is closing coal mines and laying off workers due to onerous EPA regulations that are shuttering coal-fired power plants in this country and keeping modern, more efficient plants from being built.