Paul Krugman has a rare talent for not only pushing terrible economic policies, but being misleading and smug in the process. His recent NYT column touting wind and solar power epitomizes these traits. Contrary to Krugman’s sleight of hand, in reality wind and solar still account for only a small fraction of total U.S. electrical output. If they are indeed the “wave of the future” as Krugman suggests, then wind and solar should be able to compete in the market without special government privileges.

Krugman Misleads on Wind and Solar

In Krugman’s recent article, he writes:

[W]e’re also living in an era of spectacular progress in wind and solar energy. Why has the right become so hostile to technologies that look more and more like the wave of the future?

The cost of wind power has dropped sharply – 30 percent in just the past five years, according to the International Energy Agency.

And solar panels are becoming cheaper and more efficient at a startling rate, reminiscent of the progress in microchips that underlies the information technology revolution. As a result, renewables account for essentially all recent growth in electricity generation capacity in advanced countries. [Bold added.]

Now the poor innocent reader who relied merely on Krugman’s column would walk away thinking that wind and solar were big players in the electricity sector. And look again as that last sentence I put in bold above: Surely Krugman must mean that if you ranked electricity sources in terms of capacity growth in recent years, that renewables would dominate the top of the list?

Unfortunately, anybody relying on Krugman in this way would be horribly misinformed. The following chart shows the true situation regarding contributions to electricity output. 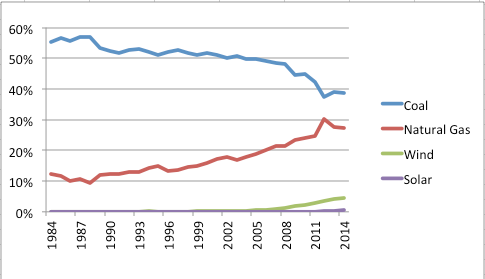 And the following table gives a much more accurate picture of the contributors to U.S. electrical capacity in the past year (with the most recent data available).

Increase in U.S. Electrical Capacity By Selected Source, as Share of Total Increase Among All Additions to Capacity 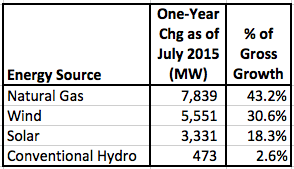 Now isn’t that interesting? Remember, Krugman told his readers that “renewables account for essentially all recent growth in electricity generation capacity in advanced countries.” Yet as the table indicates, in the United States over the past year natural gas saw the biggest growth—measured in megawatts—among any individual source, for example growing more than twice as much as solar. Furthermore, natural gas accounted for about 43% of all (gross) growth.[1]

So how in the world could Krugman claim that renewables were responsible for essentially all recent growth in capacity? One possibility is that the pattern he describes holds for “advanced countries” considered as a total group, even though his story is exactly backwards for the United States—a fact which doesn’t exactly jump out to Krugman’s (largely American) audience.

Another possibility is that Krugman was mentally dividing the energy sector into Renewables and Fossil Fuels. Since coal is part of fossil fuels, and its capacity has sharply dropped in recent years—driven in part because of the fall in natural gas prices but also the huge existing regulatory and tax burdens on the horizon for coal—perhaps Krugman is arguing that Renewables as a category account for all of the growth in capacity after you net out coal’s fall from the category of Fossil Fuels. That type of maneuver would make Krugman’s claim true even for the United States.

Whatever his rationale, it’s clear that Krugman’s column was misleading. Any normal person who speaks English would read his claims and conclude that among advanced countries—including of course the United States—wind and solar accounted for a large share of the electricity market, and that no other “old energy” source had grown much. Yet the reality is the opposite.

Proponents of wind and solar have been predicting self-sufficiency is just around the corner…for decades and counting. Furthermore, when industry groups like the American Wind Energy Alliance—speaking of which, should we “follow the money” when it comes to wind energy articles?—show the tight connection between wind capacity and federal tax advantages, that just underscores the point that wind (and solar) are currently niche energy sources. Perhaps down the road they really will take off and displace coal and natural gas, but we are not there yet.

The simple fact is that wind and solar are what EIA classifies as non-dispatchable sources, meaning that they can’t be deployed wherever Americans want to live. Thus the standard statistics on “levelized costs” of new power plants can be misleading, since you can only build wind and solar plants in certain regions conducive to those sources. In contrast, you have much more freedom when picking the location of a new coal- or natural gas-fired power plant.

The U.S. government has been giving tax advantages and other favors to wind and solar for decades—and has doubled-down on these policies recently—while the current president is on record literally claiming that his desired policies would bankrupt any new coal-fired power plant. Then, when renewables rise (somewhat) and coal drops in reaction to this mix of carrots and sticks, cheerleaders like Krugman point at the movements as proof of the superiority of wind and solar.

It’s not a coincidence that U.S. electricity generation is dominated by coal and natural gas, and that wind and solar are still very small segments of the market. Given the existing technology and infrastructure, there are serious problems with the widespread adoption of renewable energy sources. Krugman argues that anyone who wants to “unleash our energy potential” should favor special government support for wind and solar. On the contrary, the federal government needs merely to get out of the way to let entrepreneurs develop the rich domestic resource base that requires no technological innovations to harness.

[1] The reason I am using “gross growth” as the denominator is that if we use net growth—which subtracts the reductions in capacity among coal—then the resulting percentages can exceed 100 percent. For example, in the past year wind growth accounted for 314 percent of the net growth in total U.S. capacity. Although one can (eventually) make sense of this type of statistic, it is unnatural and confusing. To be clear, in the table I have summed the total increase among all energy sources that experienced growth, and then computed how much each of the listed sources grew as a share of this gross figure.