According to AAA, California has the highest gasoline prices in the United States.[i] There are several reasons for this distinction. First, California has environmental requirements for its gasoline that are more stringent than the rest of the nation, which isolates it from other refinery blends used in the country. For this reason if a refinery has an outage, prices can spike, which occurred earlier this year—pushing gas prices about a dollar higher than the nation’s average gasoline price. Because California is also geographically isolated with no pipelines to other U.S. regions, it has to import gasoline blends from overseas to make up for any shortfall. Second, California added gasoline and diesel to its cap-and-trade program at the beginning of this year, adding about 10 cents per gallon to the price of gasoline over and above its gasoline tax. Third, California has the 5th highest state and local gasoline taxes in the nation. 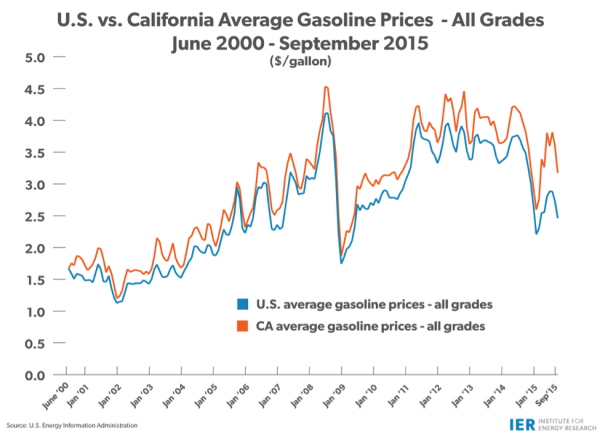 On February 18, 2015, an explosion and fire damaged the ExxonMobil refinery in Torrance, located southwest of Los Angeles. The refinery, which is the third largest in Southern California, normally accounts for about 10 percent of the state’s capacity and 22 percent of Southern California’s capacity, but has operated at less than 20 percent of its normal production since the explosion.[ii] The sudden loss of output from the Torrance refinery resulted in immediate gasoline shortfalls and higher prices. Because there are no pipelines from other U.S. regions to California (even Southern and Northern California are not connected by pipeline), the state has been forced to meet demand from overseas suppliers.

Bringing the Torrance refinery back online will ease the price spike, but it is not expected to be easy because of its massive environmental controls. The environmental control system is so large and complicated that it is housed in a building that is five stories tall and 200 feet long. It has over 300 emissions systems and units, each of which is subject to a dozen rules and regulations, according to the Air Quality Management District. When ExxonMobil upgraded the refinery to meet the more stringent particulate emissions requirements California implemented in 2009, the cost was estimated at approximately $300 million. That system was damaged in the fire.[iv]

ExxonMobil has proposed to use its prior emissions control system at the refinery to resume operation at 65 percent of capacity. That equipment, however, emits up to six times more fine particulate than the pollution controls that exploded in February. Under a proposal with the Air Quality Management District, ExxonMobil would be allowed to restart production with the older equipment if it limits emissions of PM2.5 to the same levels emitted when the plant was operating at full capacity with the newer pollution controls. ExxonMobil will also be required to hire an independent testing company to conduct emissions tests and verify PM2.5 emissions are within the legal limit.

ExxonMobil recently sold the plant for $537.5 million to independent refiner PBF Energy. The sale is contingent upon the plant being completely repaired before it closes escrow. The sale is expected to be finalized next year.[v]

Due to numerous planned outages at local refineries, significant price reductions for the state’s gasoline consumers are not likely until November when refineries can discontinue production of summer blend gasoline. About 280,000 barrels of gasoline production capacity are expected to undergo planned maintenance. When summer blend gasoline is no longer required, refineries can use additives such as butane, and make 5 to 8 percent more gasoline from every barrel of crude they process. 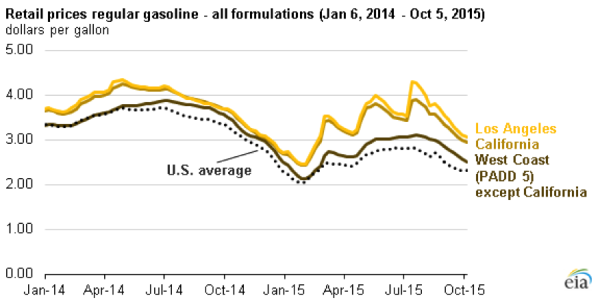 California’s cap-and-trade program to limit carbon emissions was expanded on January 1, 2015 to include on-road transportation fuels—gasoline and diesel. Beginning the first of this year, petroleum suppliers that produce greenhouse gases above a state-imposed cap must buy emissions credits through auction allowances to compensate for the greenhouse gases they emit above the cap, causing gasoline prices to increase. About 17 billion gallons of transportation fuels are now part of the state’s cap-and-trade program. Calculations made in January estimated that the program raised the price of gasoline about 10 cents per gallon. The nonpartisan Legislative Analyst’s Office estimates it will add 13 to 20 cents per gallon by 2020, though the office indicates the increase could be as high as 50 cents per gallon.[vi]

Local, State, and Federal Gasoline Taxes as of October 1, 2015
(Cents per gallon) 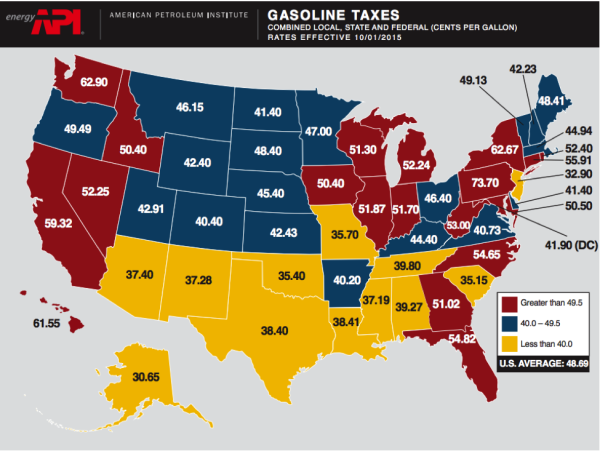 California policies have resulted in gasoline prices that are the highest in the nation because of the state’s environmental requirements for gasoline, its taxes on gasoline consumption, and its cap-and-trade program to limit greenhouse gas emissions. Each of these policies raises the price of gasoline for the consumer.