Twelve states and the District of Columbia are considering joining together in the Transportation and Climate Initiative to reduce greenhouse gas emissions from gasoline and on-road diesel fuel use.  They call the tool they propose using “Cap and Invest,” which is putting lipstick on the old cap-and-trade scheme, which itself was just another tax-and-spend proposal.

The initiative, which would encompass the region from Virginia north through the Mid-Atlantic and into New England, is a convoluted money grab based on a weak justification.

The first problem is misleading findings used to justify the program. Page 1 of the draft Memorandum of Understanding starts with:

“WHEREAS, climate change has resulted in the increased frequency and severity of extreme weather events that have adversely impacted every Signatory Jurisdiction; and

“WHEREAS, climate change poses a clear, present, and increasingly dangerous threat to the communities and economic security of each Signatory Jurisdiction; and…”

Of late, it seems every hurricane, flood, drought and tornado is offered as evidence of a climate crisis, here and now.  However, that’s not what the data show.

There has been no significant upward trend in hurricanes, floods, or droughts according to the Intergovernmental Panel on Climate Change’s Fifth Assessment Report’s chapter on extreme weather.

On page 217 of the report the authors write, “In summary, this assessment does not revise the SREX conclusion of low confidence that any reported long-term (centennial) increases in tropical cyclone activity are robust, after accounting for past changes in observing capabilities. More recent assessments indicate that it is unlikely that annual numbers of tropical storms, hurricanes and major hurricanes counts have increased over the past 100 years in the North Atlantic basin.”  Though they then point to an increase in hurricanes since the 1970s, a chart on the previous page shows the 1970s were a nadir of hurricane activity.

The conclusion regarding floods is found on page 214.  It reads, “In summary, there continues to be a lack of evidence and thus low confidence regarding the sign of trend in the magnitude and/or frequency of floods on a global scale.”

Regarding droughts they say, “In summary, the current assessment concludes that there is not enough evidence at present to suggest more than low confidence in a global-scale observed trend in drought or dryness (lack of rainfall) since the middle of the 20th century, owing to lack of direct observations, geographical inconsistencies in the trends, and dependencies of inferred trends on the index choice. Based on updated studies, AR4 conclusions regarding global increasing trends in drought since the 1970s were probably overstated.” (page 215)  They then point out that the frequency and intensity of droughts are likely to have decreased in North America since 1950.

The National Centers for Environmental Information looks at trends for tornadoes.  They conclude, “The bar charts below indicate there has been little trend in the frequency of the stronger tornadoes over the past 55 years.”

The cap-and-trade proposal outlined in the draft memorandum doesn’t seem like much of a solution to any problem other than how to scarf up billions of more dollars out of the TCI region’s residents.

Channeling Goldilocks, we can look at the middle of the three proposed caps, as presented in a December 2019 TCI webinar.  Here they propose to reduce the CO2 emissions from transportation fuels by 22 percent between 2022 and 2032.

Give the authors credit for not making it too difficult to see that doing nothing will lead to a cut of nearly the same result.  That is, the business-as-usual baseline already has the CO2 emissions dropping 19 percent—without taxing billions of dollars from transportation users.

The “clear and present danger” is to the wallets of TCI state residents—not only of drivers, but of everyone who benefits from the countless products transported in the region by truck.

And the TCI will be even worse than what the hired wonks have outlined.  Here’s why:

Cap-and-trade schemes create an artificial scarcity of something—in this case transportation fuel.  In order to get the fuel, in addition to the money you will need something called an allowance (in essence a ration coupon).  The way cap and- trade- will be implemented saves the retail consumers the hassle of dealing with the allowances, but it does not free consumers from the added cost of the artificial scarcity.

If you wanted to design something to maximize special-interest horse-trading and hogs-at-the-trough shenanigans, you could not do better than a cap-and-trade bill.  In addition to the outsized political wheeling and dealing that any new undesignated revenue stream would generate, cap-and-trade adds a feature unavailable when revenues come from taxes.  That feature is that you can give money away while pretending it is not an expenditure.

The Waxman-Markey cap-and-trade bill passed by the House of Representatives (but not the Senate) in 2009 ballooned to over 1,400 pages before it was done.  As the bill was being debated, staffers were seen walking up to the table on which the bill sat and swapping out pages to match the political deals that were being made even up to the last minute.  Many of those deals involved allocating the allowances to one preferred group or another.

It is not hard to imagine similar sorts of political deals as the TCI goes from draft memorandum to actual implementation. Perhaps it will be something like the following.  A major transportation company will say, “We are one of the biggest operators in the country. Our terminal is in our home state, but we deliver a lot of stuff outside of the TCI region and have to compete with trucking companies whose terminals are in states without the higher fuel cost.  We are willing to do our share, blah, blah, blah…” That seems to make sense, so they are given allowances to cover some portion of their higher fuel cost.

These pleas to get a chunk of the allowances will be limited only by the creativity of the army of lobbyists going after them.  You will need a big bag of popcorn for this show.

What you will not see in this show, is any estimate of how much any future global warming or sea-level rise will be attenuated by the puny (but costly) CO2 cuts.  The projected cuts are no more than hundredths of one percent of world CO2 emissions. Any climate impact will be too little to measure and much too little to notice.

Below is a chart from a TCI presentation last December (2019) showing the CO2 trajectory: 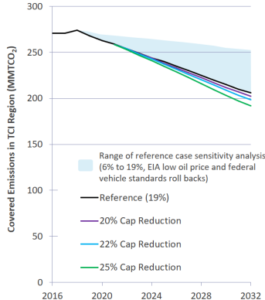 In summary, the Transportation and Climate Initiative will squeeze the transportation industry (and all its beneficiaries) out of billions of dollars per year while providing climate benefits that are too small to measure.  In the bargain it will create a special-interest feeding frenzy and an all-new bureaucracy.