It is an article of faith among climate alarmists that the U.S. federal government must take aggressive action to limit American emissions of greenhouse gases, if we are to have any hope of the rest of the world following suit. They stress the importance of “U.S. leadership” because they know full well that actual analysis shows U.S. policies will have a negligible impact on the climate, using their own preferred computer models. In the present post, I’ll show some results from typical simulations that demonstrate (according to assumptions featured in the IPCC reports) that it is China, not the U.S., that holds the climate future in its hands.

In this post I will show the results of simulations performed using C-ROADS software, which is available to the public and is used by industry and academics to make climate policy analysis more distributed. (The results were graciously provided to me by Chip Knappenberger, Assistant Director of the Center for the Study of Science at the Cato Institute, though of course he is not responsible for my interpretation.) This is a standard modeling tool that has no ideological bias; its designers want it to reflect the models and climate scenarios discussed in the scholarly literature.

I wanted the C-ROADS software to look at two popular “business-as-usual” scenarios for future emissions, and to report the outcomes based on country. (This type of disaggregation is not available in most reports.) One of the two scenarios chosen was the A1B of the IPCC Special Report on Emissions Scenarios (SRES), which yields a 735 ppm concentration of CO2 by the year 2100, producing warming of 3.8°C (at least according to the C-ROADS simulation). Although A1B is “business-as-usual,” meaning that it shows a possible trajectory of the world economy and climate in which governments do not try to regulate emissions, it assumes technological innovation in the future will allow strong economic growth to occur with rapidly diminishing emissions per unit of GDP.

The second of the scenarios I study is referred to in the literature as RPC8.5. In the latest IPCC Report (the AR5), they have replaced the old SRES scenarios with representative pathway concentrations, or RPCs. The one assuming the largest amount of emissions and warming is RPC8.5. This trajectory is quite pessimistic, with some analysts arguing that RCP8.5 is a worst-case scenario that assumes more radiative forcing (by 2100) than most of the “business-as-usual” scenarios. (More information on the SRES and RCPs can be found here.)

For our purposes, we will study the two different storylines—namely the A1B and the RCP8.5—using the C-ROADS software, in order to get a broad feel for what “business-as-usual” looks like, according to the popular computer models and assumptions. As we will see, under either storyline, the US is a bit player compared to China.

Figure 1 shows the projected path of emissions under the A1B scenario.

As Figure 1 indicates, the US (as well as the EU) are small potatoes compared to China. Note that even by the end of the century, after China’s emissions have fallen significantly from its earlier peak, nonetheless China will still emit double the CO2 as the U.S. Also, notice too that after 2060 India leaves the West behind in annual emissions as well.

In Figure 2, we aggregate the annual data into a composite for the remaining century: 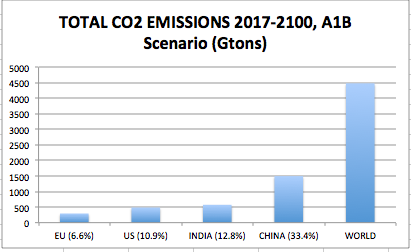 As Figure 2 indicates, over the entire period going forward, the EU and U.S. each have lower total emissions than India, and they are far below China. Specifically, in the A1B scenario China is projected to emit more than three times as much carbon dioxide as the United States, and more than five times as much as the EU. Another way of framing the issue is that China and India alone account for almost half (46.2 percent) of total global emissions through the year 2100.

We have similar results if we instead look at the RCP8.5 pathway. Here is what C-ROADS outputs for annual emissions: 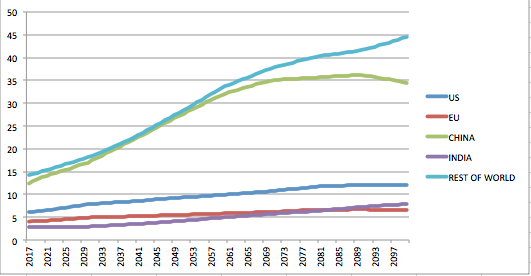 As Figure 3 shows, the RCP8.5 pathway has India keeping pace with the EU, but we still have explosive growth in emissions from China and the rest of the world, compared to much more moderate growth in the U.S.. We see the century totals in Figure 4. 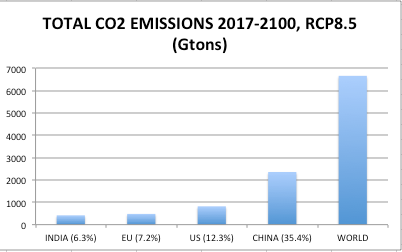 Although the U.S. share is higher in this exercise than in A1B, it is still true that China is far more significant, with almost triple the cumulative emissions.

The Alarmists Can’t Have It Both Ways

There is a glaring contradiction in the official position of some of the loudest alarmists on the climate change issue. On the one hand, they say that the United States must agree to aggressive government interventions against emissions, if we are to have any hope of other governments around the world getting on board.

So we have a serious problem here, in putting these various claims together. In light of the above figures, we see that using the very models and assumptions favored by the “consensus” community, the U.S. at most is responsible for 10 – 12 percent of global emissions if governments “do nothing.” In other words, if there were no top-down regulations on coal plants or a carbon tax in the U.S., and if other governments also refrained from imposing emission reduction schemes, then these standard simulations show that the U.S. would only emit 10-12 percent of global carbon dioxide emissions. At the same time, the alleged ravages of climate change will affect other regions much more than it will hurt Americans. Finally, aggressive government interventions to curb emissions—we are told—won’t hurt economic growth much, and indeed might even stimulate job creation in wind turbines, solar panels, etc. after we account for the benefits of tax reform.

In light of all of these arguments, how can it possibly be that U.S. “leadership” is necessary on this issue when the U.S. controls only 10-12 percent of carbon dioxide emissions? Are we really to believe the other countries of the world will condemn their own people to calamity, when the power to avert the alleged danger is entirely within their grasp, and (we are told) the costs of such interventions will be quite modest, or even nonexistent?

Over time, it is becoming clearer that the standard rhetoric of the alarmist camp when it comes to global warming doesn’t match up with their own preferred computer models. This is why you have writers at Vox trumpeting surveys showing that published climate economists don’t believe the climate economic models.

When it comes to the Paris Climate Treaty, we are told that U.S. leadership is crucial. And yet, this can’t possibly be the case if we believe the other things the alarmists have been telling us about climate change policy. One starts to get the feeling that their pronouncements are driven by ideology, rather than neutral science.