The Vermont Yankee nuclear power plant ended its operations at the end of 2014. Elected officials and environmentalists claimed that its generation would be replaced by “carbon-free” solar and wind power. However, that did not happen. New England upped its natural gas generation to make up for the lost power from Vermont Yankee, as data from the Independent System Operator for New England shows.[i] 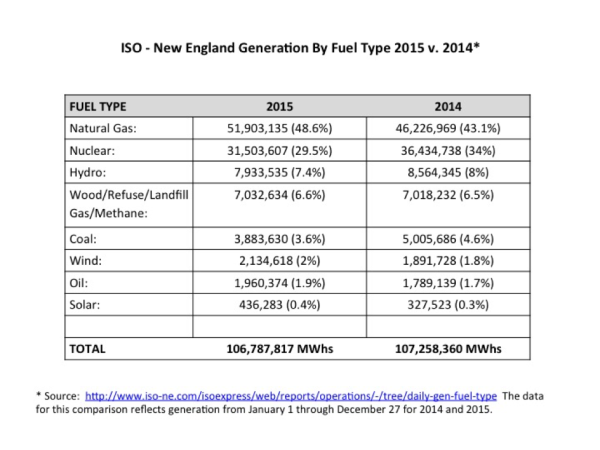 Vermont Yankee, a 604-megawatt nuclear power plant, provided 42 years of reliable, carbon dioxide-free electricity to New England’s electric consumers. Over its lifetime, Vermont Yankee produced over 171 billion kilowatt-hours of electricity, providing 72 percent of the electricity generated in Vermont and 35 percent of the electricity consumed in the state. The plant’s capacity factor exceeded 80 percent over its lifetime – more than double the capacity factor of the most efficient solar or wind plant in the United States. The plant’s final operating cycle, which ended on December 29, 2014, was the culmination of 633 days and nights of continuous operation.[iii]

Vermont Yankee is an independent power producer (merchant plant), and as such, the costs associated with its operation and maintenance cannot be recovered through regulated cost-of-service rates. Vermont Yankee’s owner, Entergy, announced in August of 2013 that it would be closing the plant at the end of 2014 due to financial factors that included low wholesale electricity prices reducing the profitability of the plant; the need to invest in significant capital costs to maintain the unit based on NRC’s requirements; and low prices in the regional market for electric generating capacity, which provides revenue to plant owners in addition to their revenues from electricity sales. Low natural gas prices have resulted in low wholesale electricity prices, and have made natural gas the major supplier of electricity in New England.[iv] So, in this context, it is not at all surprising that natural gas substituted for the reduced nuclear power generation from the closure of Vermont Yankee.

The closing of Vermont Yankee resulted in additional natural gas consumption as many analysts predicted, and with additional carbon dioxide emissions. Interestingly, Vermont was the first state to ban the practice of hydraulic fracturing, which produces the natural gas that is increasingly used in electrical generation. The shale gas renaissance has produced sustained low natural gas prices and low wholesale energy prices, resulting in financial problems for merchant power plants that cannot get adequate compensation to stay in business, especially due to subsidies and mandates for competing intermittent sources like wind and solar. Prudent management, however, means that diversity of supply issues should be considered. Relying on one major power source without adequate infrastructure could result in less reliable electricity generation and spiking of electricity prices.

[ii] Energy Information Administration, How much carbon dioxide is produced per kilowatt hour when generating electricity with fossil fuels?, https://www.eia.gov/tools/faqs/faq.cfm?id=74&t=11