California’s politicians would like you to believe that their electricity comes from non-coal sources. However, while there are very few coal plants in California, making up only 0.4 percent of the state’s generation in 2014[i], California imports electricity from neighboring states and as much as half of Southern California’s electric generation comes from coal-fired generating plants in Utah, New Mexico, and Arizona.[ii] Although California is pushing electric vehicles, wanting 1.5 million on the road by 2025,[iii] the greenhouse gas savings from their use will be minuscule if electricity continues to be generated mainly from imports of coal-fired generation and natural gas that supplies the state with 60 percent of its electricity. California intends to become coal-free when its coal contracts expire in 2027 and when its carbon law requires compliance. The transition to renewable energy and natural gas, however, will be expensive to the state’s electricity consumers, and reliability of the state’s electric system could become an issue.

California is one of the nation’s largest industrial consumers of coal. In 2013, it was the eighth-biggest industrial coal user, consuming 1.4 million tons. While this amount and the consumption of coal used to produce electricity imports is small compared to coal consumption in the eastern United States and other western states, it still represents an important market for some western coal producers.

According to a study by SNL, three out-of-state coal-fired power plants are providing up to 50 percent of the electricity for Southern California—the Intermountain Power Project in Utah, the San Juan plant in New Mexico and the Navajo plant in Arizona. The three plants received a total of 19.6 million tons of coal in 2014 and 10.1 million tons of coal through July of this year.[iv]

California’s carbon law AB 32 requires the state’s greenhouse gas emissions return to 1990 levels by 2020, and in doing so, sets in-state plant performance standards that are too stringent for conventional coal units. Once current power contracts expire in 2027, it will be illegal for California utilities to get coal power from out-of-state plants. As a result, the plants will need to be shuttered or converted to natural gas.

In order to keep selling electricity to California, Utah’s Intermountain Power Project is expected to convert to natural gas by 2025. The Utah power company sells about 90 percent of its power to six California municipalities. About 45 percent of the company’s capacity is owned by the Los Angeles Department of Water and Power, who has indicated that it will curtail coal use by 2025.

New Mexico’s San Juan plant is planning to shutter two coal-fired generators by the end of 2017 due to federal EPA regulations. 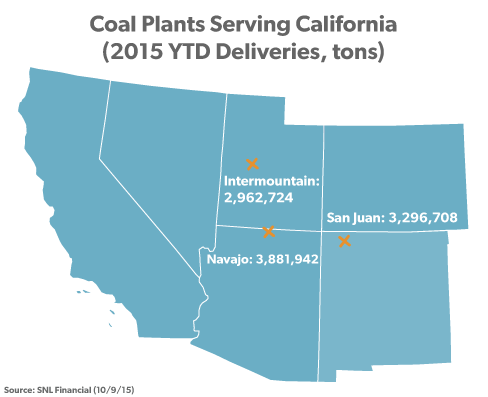 California is clearly taking steps to implement its carbon law and remove coal from the state. But those steps will clearly require rate hikes to pay for new renewable and natural gas plants, and to convert the non-shuttered coal-fired plants to natural gas. IER’s report on the levelized cost of existing electric plants indicates that a new natural gas-fired plant is about twice as expensive as an existing coal-fired plant and that a new wind plant is 2 to 3 times as expensive as an existing coal plant.[v] Governor Jerry Brown has increased those costs even further by signing a new law on October 7, requiring retail electricity sellers and investor- and publicly owned utilities in the state to get 50 percent of their electricity from renewable sources by the end of 2030.[vi]

California laws are making it expensive to live in the state as this and a past post have indicated. Their policies have left the state with the 5th highest residential electricity price in the nation and the nation’s highest gasoline prices, according to AAA.[vii] Some believe the Environmental Protection Agency is trying to mimic California policies in its regulations. The rest of the nation needs to beware of the implications of such policies.