The Energy Information Administration (EIA) released its International Energy Outlook 2013 on July 25, reporting that global energy demand will grow by 56 percent between 2010 and 2040. According to EIA, most of this growth will come from the developing countries where strong economic growth is driving additional energy demand. EIA estimates that China and India will account for half of the world’s increase in energy consumption through 2040.  China, for example, used 3.4 percent more energy than the United States in 2010, but is expected to double U.S. energy demand by 2040. Further, while nuclear and renewable energy are projected to be the fasting growing sources of supply, fossil fuels are still expected to supply almost 80 percent of that demand in 2040. As a result, based on current policies and regulations, energy-related carbon dioxide emissions are projected to increase by 46 percent between 2010 and 2040, with almost 70 percent of the increase coming from countries in developing Asia. 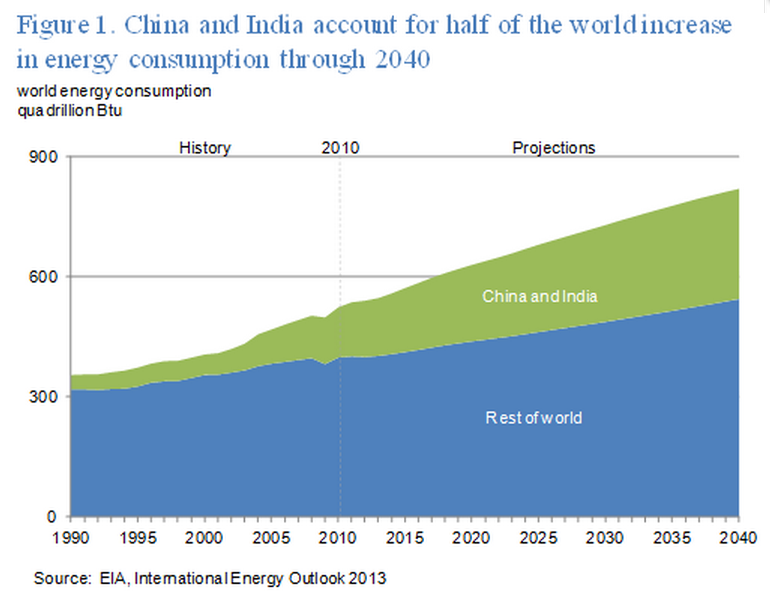 Although coal demand in the United States is decreasing due to low natural gas prices from hydraulic fracturing and Obama administration regulatory policies against coal use, coal is still the second largest supplier of energy worldwide in the EIA forecasts. It is second only to petroleum. However, both petroleum liquids and coal lose some market share to natural gas, nuclear power and renewable energy between 2010 and 2040. Coal’s share declines slightly from 28 percent in 2010 to 27 percent in 2040. Petroleum liquids, including biofuels, capture 34 percent of the market in 2010, but its share declines to 28 percent in 2040. Natural gas increases its share by one percentage point as increasing supplies of tight gas, shale gas, and coalbed methane support growth in projected worldwide gas use. 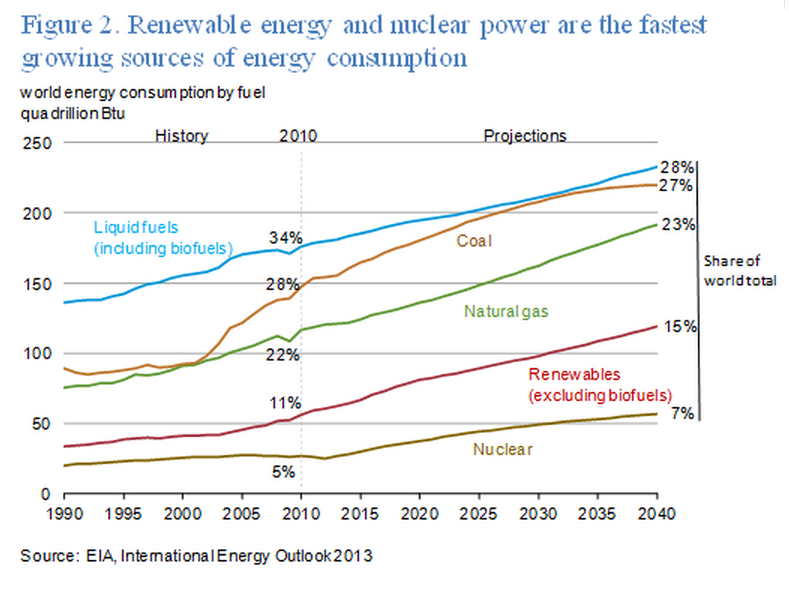 Despite the nuclear accident at Fukushima, Japan in March 2011, electricity generation from nuclear power is projected to more than double during the 30-year projection period as concerns about energy security and greenhouse gas emissions support the construction of new nuclear units, mostly in developing Asia. China is expected to account for more than 40 percent of the net increase in nuclear capacity globally, adding 149 gigawatts of nuclear capacity by 2040. According to EIA, by 2029 China will be the world’s leader in total nuclear consumption. Other countries adding substantial nuclear power capacity by 2040 are:  India (47 gigawatts ), Russia (31 gigawatts), and South Korea (27 gigawatts).

The majority of new renewable energy is from hydropower and wind power. Of the new renewable generation added over the projection period, 52 percent is hydroelectric power and 28 percent is wind power, with the hydroelectric power occurring mostly in the developing countries and the wind power occurring mostly in the developed countries. Wind energy has grown rapidly over the past decade, increasing from 18 gigawatts of net installed capacity at the end of 2000 to 183 gigawatts at the end of 2010. The intermittence of wind and solar energy, however, hinders their economic competitiveness, as they are not necessarily available when they would be of greatest value to the system. 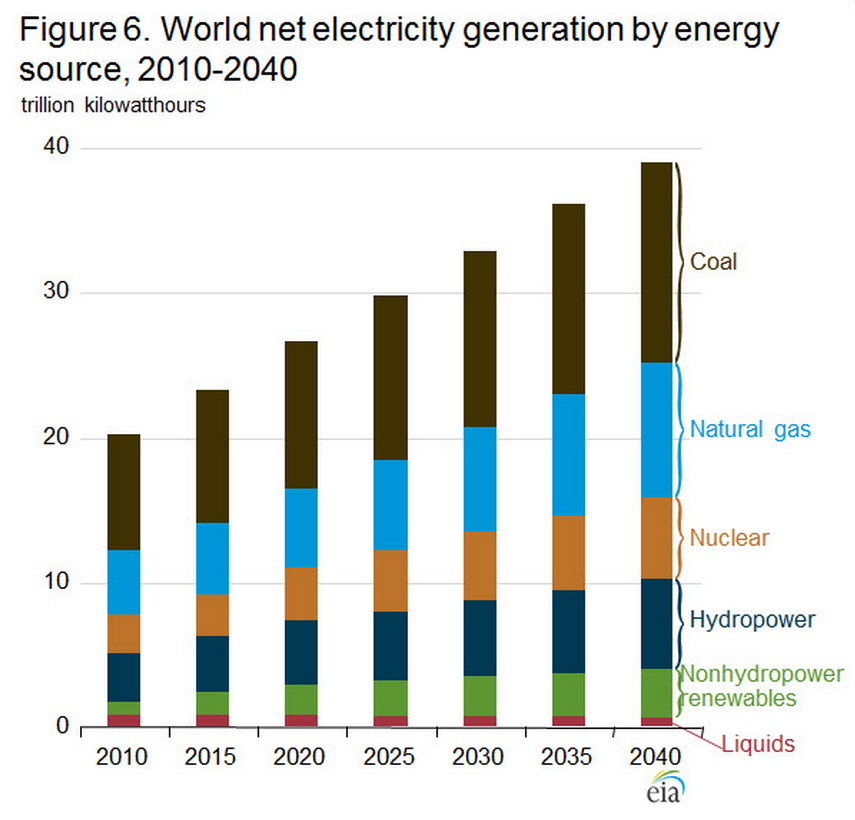 Petroleum liquids production increases by 28.3 million barrels per day from 2010 to 2040. Petroleum liquids include crude oil and lease condensate, natural gas plant liquids, bitumen, extra-heavy oil, refinery gains, and other liquid fuels (coal-to-liquids, gas-to-liquids, biofuels, and kerogen). The EIA assumes that countries in the Organization of the Petroleum Exporting Countries (OPEC) will invest in incremental production capacity to maintain a 39 to 43 percent share of total world liquids production through 2040, which is consistent with their share over the past 15 years. Increasing volumes of petroleum from OPEC producers contribute 13.8 million barrels per day to the total increase in world liquids production, and petroleum supplies from non-OPEC countries add another 11.5 million barrels per day. (See figure below.) Non-OPEC oil supply growth is concentrated in 5 countries: Russia, the United States, Brazil, Canada, and Kazakhstan.

Advances in technology make liquids production in previously inaccessible regions increasingly feasible and higher oil prices make production in those regions economically viable. EIA indicates that while the total extent of the world’s shale oil resources is not yet fully understood, there is potential for shale oil production to increase non-OPEC supplies of liquid fuels substantially over the course of the projection period. EIA estimates worldwide technically recoverable shale oil resources to total 345 billion barrels, which would add considerable liquid fuels production potential if the resources became economically competitive with other sources of liquids supply. 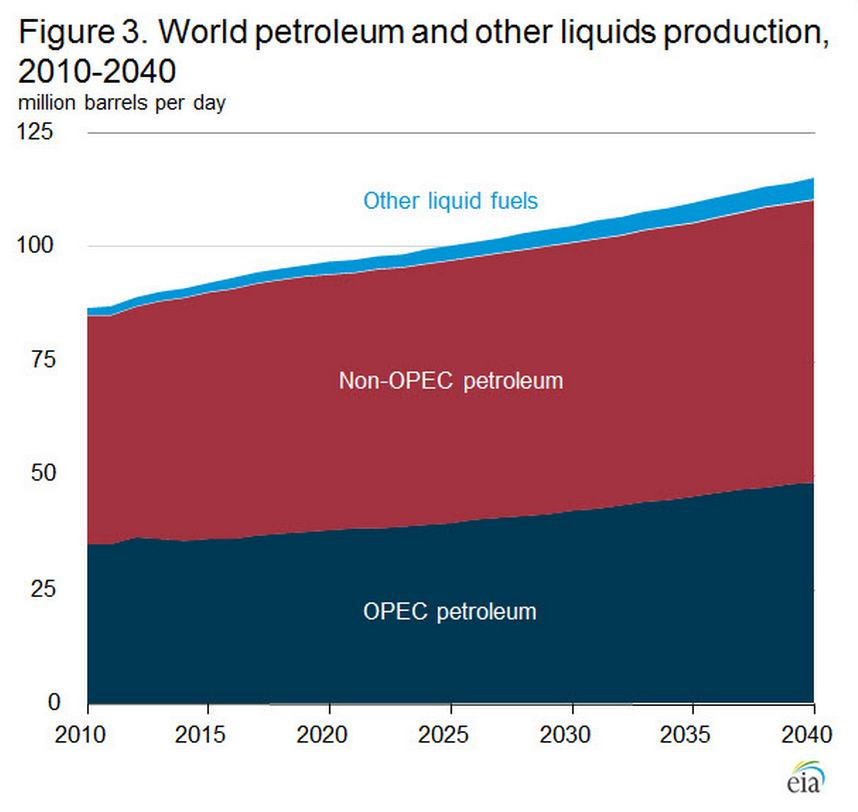 According to the EIA, in 2040 the world will still use oil, natural gas, and coal for almost 80 percent of its energy supply. Petroleum liquids will continue to provide the largest share, followed by coal and natural gas. Nuclear energy and renewable energy will increase their market share, but will not be able to displace fossil fuels. Energy-related carbon dioxide emissions are projected to increase by 46 percent by 2040 because of increased consumption of oil, natural gas, and coal. Developing Asia is expected to account for more than 70 percent of the increase in energy-related carbon dioxide emissions. China and India will be responsible for half of the world’s increase in energy consumption as they use energy to fuel their economic growth.  It is clear from EIA’s assessment of the world energy picture that other nations will be using increasing amounts of energy of all kinds, but especially those from fossil energy sources, for decades to come.

Obama-California Energy Efficiency Mandates Coming to a Town Near You

World Bank Encourages Energy Poverty in the Name of Sustainability