In President Obama’s June 25 climate speech, he announced that the United States would no longer provide public financing for coal plants overseas, with the President noting that aid for coal plants would only come where “there’s no other viable way for the poorest countries to generate electricity.”  It appears that his announcement has already had an impact on international development policy. Just three weeks after this announcement, the board of directors of the World Bank, an international financial institution that provides loans to developing countries, embraced a new focus on sustainability.

In its July 16 report, titled “Toward a Sustainable Energy Future for All—Directions for the World Bank Group’s Energy Sector,” the World Bank backed President Obama’s call to end public financing for new coal power generation projects overseas. Echoing the President’s June 25 remarks, the report states that coal-based projects will receive support only in “rare circumstances” where there are “no feasible alternatives to coal” for meeting basic energy needs.

As the World Bank’s largest shareholder, “the United States plays a unique role in influencing and shaping development priorities.” Also, according to the Congressional Research Service, the U.S. contributed over $1.9 billion to the World Bank in 2012, ostensibly to advance its mission of ending extreme poverty globally. As such, U.S. taxpayers have a direct stake in World Bank energy policy, and with the President’s announcement, one of the practical questions for the public to consider is whether the exclusion of coal projects is compatible with the organization’s mission to improve conditions in the developing world.

Coal projects have the potential to reduce energy poverty and even improve the environment for over a billion people in developing countries. In that context, the new coal policy espoused by the Obama administration and the World Bank undermines the World Bank’s alleged goal of eliminating world poverty.

The World Bank’s July 16 report outlines the stark challenges that lie ahead in the fight to end energy poverty, noting, “1.2 billion people are without access to electricity and 2.8 billion are without modern cooking facilities. Lack of energy limits opportunity, job creation, business development, and access to health and education.” That means nearly 2 out of 5 people on the planet still use wood, dung, or other “biomass” for cooking, and more than 1 out of 6 people have no access to electricity.

The unfortunate reality faced by communities without access to affordable energy is that the opportunity cost of not having power is significant. Where modern forms of energy are expensive or nonexistent, people cannot flourish. Instead, it takes much more of their time and resources to do things we take for granted—to find clean water, to trade their goods, to get to a hospital, or to read a book at night.

Given the bleak circumstances of the world’s energy poor, the World Bank’s bias against coal is misplaced. It is inconsistent to claim to help countries secure “affordable and reliable” energy while limiting access to coal power, which in many countries is absolutely the most affordable and reliable energy source.  As the World Economic Forum noted this year, “in terms of energy generated the biggest growth since the beginning of the century has been, by far, in coal – nearly twice that of natural gas, nearly three times that of oil, and almost ten times that of renewables. This is the result of high economic growth rates in emerging market countries and the rapidly rising need for power.”

In terms of sustaining and improving the lives of the world’s energy poor, the most “sustainable” energy is any energy at all. Referring to potential plans to finance a coal-fired power plant in Kosovo last April, World Bank President Jim Yong Kim said: “I don’t think it’s fair to tell the people in Kosovo ‘While the rich countries continue to burn coal, you’re going to have to freeze to death because it’s against our political ideology to support you…I can’t do that.” In other words, the cost of environmental “sustainability” is actually human life and human development.

Thus, the World Bank’s decision to support a narrow vision environmental sustainability over human development is contrary to the organization’s mission as a whole and contrary to the World Bank’s position just last year. The World Bank board of directors’ vote to cut coal out of the conversation demonstrates that it cares more about appeasing some people in rich nations than alleviating the suffering of real people right now. Confronted with the ultimatum to either provide much-needed energy by financing coal plants or to let people “freeze to death,” the World Bank’s new policy indicates that it might actually choose the latter.

Given its hesitancy to help provide power in Kosovo, one might expect the World Bank to forecast huge environmental costs from providing energy to those without it. However, citing International Energy Agency estimates, the July 16 report states “achieving universal access would have a negligible environmental impact—increasing greenhouse gas emissions by less than 1 percent.” Therefore, the World Bank is tearing up the best ticket out of energy poverty for a “negligible” impact on greenhouse gas emissions. There must be more to it—what about other environmental impacts?

Perhaps counter-intuitively, coal-fired electricity can dramatically reduce negative health impacts from air pollution in energy-poor countries. For example, there are huge health problems associated with the indoor combustion of wood, dung, and crop waste—fuels we in the United States don’t think much about because we have cleaner indoor energy in the form of electricity and natural gas. The International Energy Agency highlights the issue:

The World Health Organization (WHO) estimates that 1.5 million premature deaths per year are directly attributable to indoor air pollution from the use of solid fuels. That is more than 4,000 deaths per day, more than half of them children under five years of age. More than 85% of these deaths (about 1.3 million people) are due to biomass use, the rest due to coal.

The reality is that coal-fired power plants will dramatically reduce the pollution that affects over a billion people worldwide. Affordable electricity means that people will not face these terrible impacts of indoor air pollution.

The World Bank’s new “sustainability” policy also appears to ignore potential long-term savings that could result from the use of coal. The July 16 report states that “relatively high fossil fuel prices make alternative energy sources more competitive.” Ironically, however, the chart that is meant to show the increased costs of oil, gas, and coal prices shows upward trends in oil and natural gas prices, with a flat trend in coal prices. 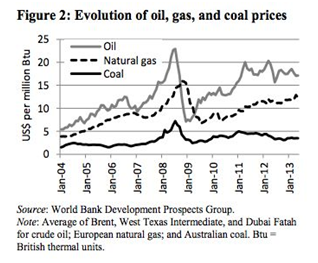 It is commendable, however, that the World Bank remains committed to natural gas production. To that end, the July 16 report includes a section on ways the World Bank “will scale up its engagement in natural gas” and remarks that “[a]s the U.S. experience shows, unconventional gas holds significant economic potential.” U.S. shale gas production has supplied relatively low-cost energy in the recent era of tight regulations on coal. As the above graph suggests, other parts of the world may not have ready access to abundant natural gas supplies and, therefore, should embrace low-cost coal for heat and electricity generation. While it is laudable that the World Bank supports natural gas production, its shift away from abundant and inexpensive coal power cannot be justified by the price trends it cites.

Affordable energy (or access to modern energy at all) is a prerequisite to alleviating human suffering and, ultimately, economic growth. By following President Obama’s example and excluding coal from the conversation, the World Bank is going against its stated mission to end extreme poverty. Even worse, it is denying the benefits of affordable energy to developing countries, whose people are desperately seeking to leave behind an inhumane and unhealthy state of energy poverty.