North Carolina does not produce oil and natural gas, even though there are potential offshore natural gas plays and the potential for onshore shale gas plays. Instead of producing some of its own energy resources, North Carolina imports oil and gas supplies from other states and overseas. The same is true for the coal that supplies the state’s coal-fired generating units. North Carolina primarily uses coal from West Virginia and Kentucky.

The state’s electricity generation is mainly produced by coal, followed by nuclear power and natural gas. The residential and transportation sectors lead the state’s energy consumption, followed equally by the commercial and industrial sectors. 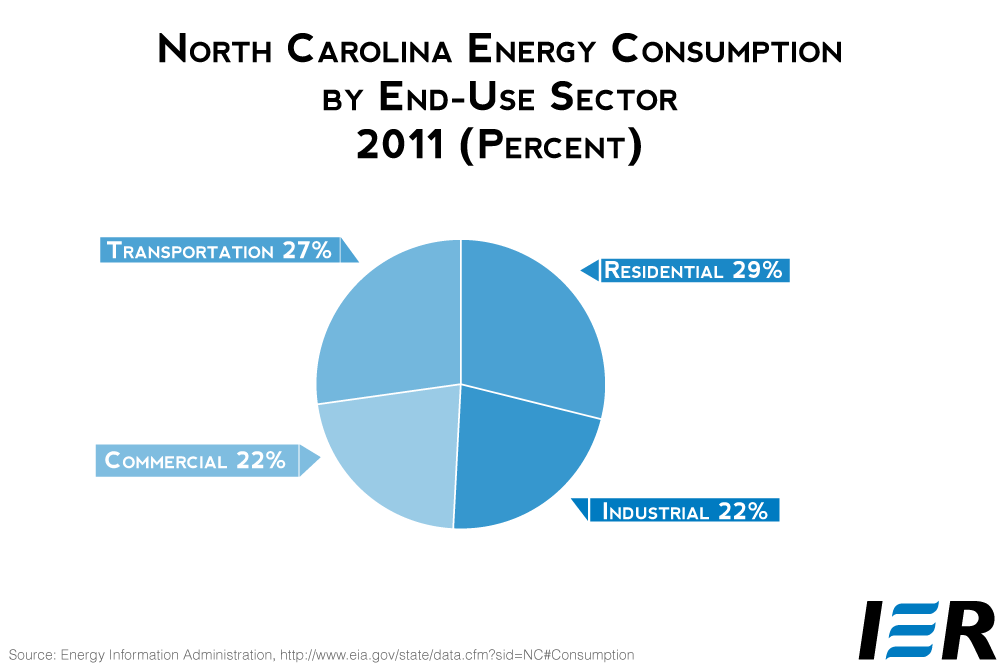 The industrial sector is the leading natural gas-consuming sector, although consumption by residential and commercial users is also substantial. Approximately one-fourth of North Carolina households use natural gas as their main source of energy for home heating.

Coal-fired power plants typically account for over two-fifths of the State’s electricity generation, followed by nuclear power that supplies a third. Natural gas accounted for 17 percent of the state’s generation in 2012. Hydroelectric and biomass produced the state’s remaining electricity supply.

North Carolina’s receives its coal by rail from mines in West Virginia and Kentucky. The state has three nuclear power plants (McGuire, Brunswick, and Harris).  Hydroelectric power plants are located along several rivers in central and western North Carolina. 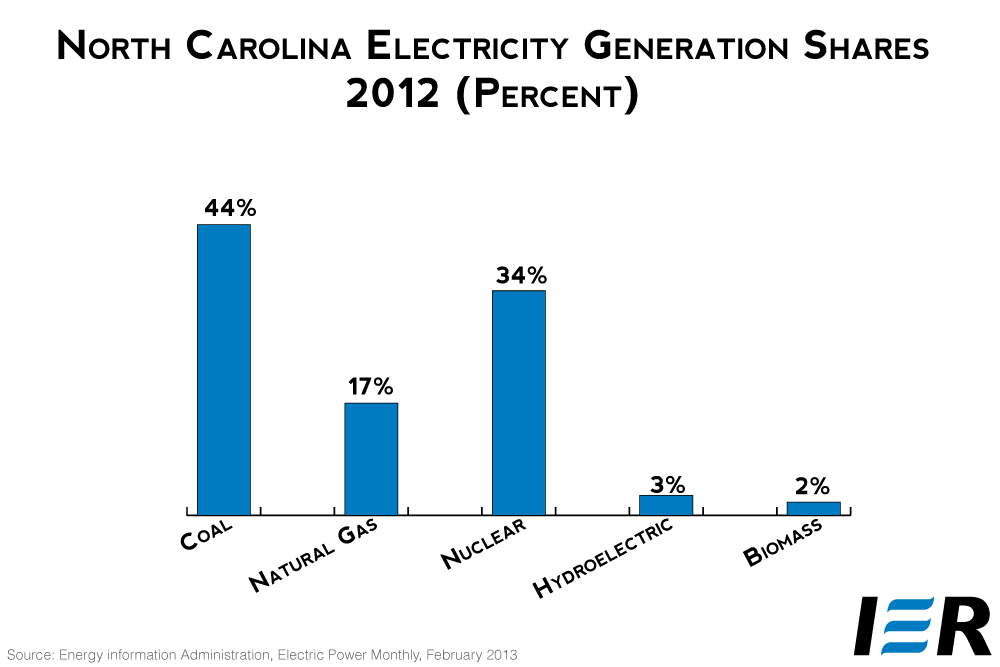 Note: There is a small amount of petroleum, solar, and other generation.

In August 2007, North Carolina adopted a renewable energy and energy efficiency portfolio standard requiring investor-owned electric utilities to meet 12.5 percent of retail electricity demand through renewable energy or energy efficiency measures by 2021. Electric membership corporations and municipalities that sell electric power within the State must meet a 10-percent standard by 2018.

Below are some facts about North Carolina’s regulatory environment that are likely to affect the cost of energy or the cost of using energy. Although affordable energy is a vital component of a healthy economy, regulations frequently increase energy costs.  North Carolina’s moderate electric prices and low natural gas prices can be attributed in part to its regulatory environment.

North Carolina requires utilities to generate a certain percent of the electricity they sell from renewable energy sources. The state’s renewable energy and energy efficiency portfolio standard established in August 2007 requires investor-owned utilities to generate 12.5 percent of 2020 retail electricity sales from eligible energy resources by 2021, while municipal utilities and cooperatives must meet a target of 10 percent of renewable energy by 2018. Up to 25 percent of the requirement may be met through energy efficiency technologies, including combined heat and power systems powered by non-renewable fuels. After 2021, up to 40 percent of the standard may be met through energy efficiency.  The overall target for renewable energy includes technology-specific targets of 0.2 percent solar by 2018, 0.2 percent energy recovery from swine waste by 2018, and 900,000 megawatt-hours of electricity derived from poultry waste by 2014. Eligible energy resources include solar-electric, solar thermal, wind, hydropower up to 10 megawatts, ocean current or wave energy, biomass that uses Best Available Control Technology for air emissions, landfill gas, combined heat and power using waste heat from renewables, hydrogen derived from renewables, and electricity demand reduction.

North Carolina requires new residential and commercial buildings to meet energy building codes. Residential and commercial buildings must meet the 2012 North Carolina Energy Conservation Code, which is based on the 2009 International Energy Conservation Code (IECC)  The IECC developed by the International Code Council is a model code that mandates certain energy efficiency standards.

State buildings must meet a variety of standards intended to decrease energy and water use. Senate Bill 668 of 2007 and Senate Bill 1946 of 2008 established several policies to reduce the amount of energy, water and other resources consumed by the state government in its buildings and facilities. These standards apply to all new buildings owned by the state, the University of North Carolina, and the North Carolina Community College system, which are larger than 20,000 gross square feet. Also included are renovation projects when the cost is greater than 50 percent of the insurance value and the project is greater than 20,000 square feet. These projects must be designed, constructed and certified to exceed the energy efficiency requirements of ASHRAE 90.1-2004 by 30 percent for new buildings, and 20 percent for major renovations. ASHRAE 90.1-2004 developed by the American Society of Heating and Refrigeration and Air Conditioning Engineers is a model code that mandates certain energy efficiency standards.

Additionally, new buildings must consume 20 percent less potable water than the North Carolina Plumbing Code requires, and 50 percent less outdoor water than typical facilities using conventional systems. And, the energy consumption per gross square foot for all State buildings must be reduced by 20 percent by 2010, and 30 percent by 2015 based on consumption during the 2003 to 2004 fiscal year.

All existing State-owned buildings must have made lighting upgrades that include replacing exit signs with ones that utilize LEDs and the replacing incandescent light bulbs with compact fluorescent bulbs by December 31, 2009. Existing buildings must also install faucet aerators and low-flow shower heads, and adopt other methods to reduce either outdoor or indoor water consumption by 20 percent relative to a 2002 to 2003 baseline. And, any new office equipment and appliances must be Energy Star certified.

North Carolina does not produce fossil energy so it must get its supplies from other states or abroad. It generates it electricity mainly from coal, nuclear, and natural gas. The state does impose a renewable energy and energy efficiency standard and has moderate electricity prices. Its gasoline prices are the 12th lowest in the nation.

World Bank Encourages Energy Poverty in the Name of Sustainability