The United States has by far the world’s largest coal reserves. In fact, we have so much coal that just our proven coal reserves would last over 480 years at our current rate of use. But there is a concerted effort to stop the use of this abundant and inexpensive source of energy.

Coal now represents just 20 percent of our energy supply, down from 23 percent in 2001, and 42 percent of our electricity generation, down from 51 percent a decade ago.  The reasons for its demise are increasing federal environmental regulations, state and federal policies mandating and subsidizing electricity generation from renewable energy sources, an aging fleet of coal plants that may be denied permits to maintain them and technology that makes shale natural gas abundant and inexpensive. But what does this apparent phasing out of our most abundant resource mean to our energy supply and generation future? 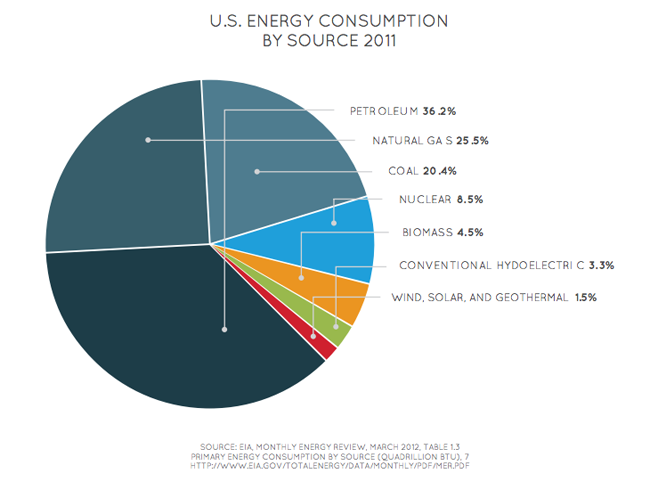 Last month, the Environmental Protection Agency (EPA) proposed draconian restrictions on greenhouse gas emissions from new power plants, which would essentially kill coal-fired power plants in this country. The new regulations would require new power plants to release no more than 1,000 pounds of carbon dioxide per megawatt‐hour. EPA believes that new natural-gas plants will be able to meet the standard without adding additional technology. New coal-fired plants, however, would need to add carbon capture and storage (CCS) technology, through which carbon dioxide emissions are collected and sequestered in the ground rather than released into the atmosphere.[i] The problem is that CCS technology is not commercially viable today and the Department of Energy believes it will take 20 years or more to get it there. While the new regulation is oriented to new plants only, some environmentalists believe it will eventually relate to existing coal-fired plants, which would mean very quickly losing 20 percent of our energy supply and 40 percent of our electricity supply.[ii]

The reason some environmentalists believe the new rule will affect existing plants eventually is because of EPA’s New Source Review program. Under that program, whenever a plant upgrades, it must comply with every rule that EPA has evoked. Because of EPA’s other regulations (e.g. the mercury rule  announced in December), existing coal-fired plants will have to add environmental equipment to meet those rules and because of New Source Review, coal-plant owners will have to confront the new carbon performance standards, thus eventually killing all coal plants over time.[iii]   So while the rule supposedly exempts existing coal plants, in order to comply with all the other regulations EPA is heaping on the back of coal, upgrades to existing plants will be necessary that very likely will trigger the CCS mandate.  This would fulfill the President’s announced plan to “bankrupt” the coal companies.

Perhaps the most outrageous claim EPA makes is that the total cost of the new carbon performance standards is $0, and that it will have no major effect on the economy, and that no jobs will be lost. That is because EPA assumes the United States will never build another coal-fired plant.  And if all of their anti-coal regulations are eventually implemented, they are probably right.

While EPA’s overregulation is bad news, one challenge for coal is actually good news: natural gas prices are low.  Natural gas, due to hydraulic fracturing and horizontal drilling technology on private and state lands, has increased its share of electricity generation to 25 percent and its share of total primary energy consumption to 26 percent in 2011. Natural gas future prices have dropped to below $2 per thousand cubic feet, the lowest level since January 2002. Industrial users are increasing their consumption of natural gas and bringing offshore facilities back to the United States, demonstrating just how important inexpensive energy is to economic growth.

According to the Energy Information Administration (EIA), the cost of generating electricity from new natural gas-fired plants is about a third less than that of coal-fired power plants, making natural gas plants much more attractive than coal plants to electric generating companies.  For coal-fired power plants, the EIA adds a 3-percentage point increase in the cost of capital, equivalent to a $15 per metric ton of carbon dioxide (CO2) emissions fee, to represent the possibility that coal-fired plants may eventually have to purchase allowances or otherwise incur costs to comply with EPA regulations.[iv] As a result, coal growth in the generating sector is slowed dramatically in EIA’s forecasts.  And, given that the cost of generating electricity from natural-gas-fired plants is 54 percent less than coal-fired plants with the CCS technology required by the rule, no coal plants will be built in the future in the forecasts, consistent with what  EPA expects.  This is probably what President Obama meant in November 2010 when he said, “Cap and trade was just one way of skinning the cat.  It was a means, not an end.  I’m going to be looking for other means to address this problem. “

Federal and state policies have mandated and subsidized renewable technologies so that renewables  now represent 9 percent of primary energy consumption and 13 percent of electric generation (although more than half of this is hydroelectric, which is generally opposed by opponents of fossil energy). Over half the states and the District of Columbia have “Renewable Portfolio Standards” that require a certain percent of their electricity to be from renewable sources in the future.  For example, California requires 33 percent of its electricity to be produced from qualified renewable energy by 2020. Most states with such renewable programs exclude existing hydroelectric generation from meeting the standard.

Federal programs of loan guarantees, rebates, and subsidies have also helped the renewable industry to make in-roads by financing and/or subsidizing their investment costs. While increased renewable generation has helped to cut back coal’s share, its impact is less than that of natural gas because capacity factors (amount of generation per unit of capacity) of renewable technologies are much lower than those of fossil fuel generating technologies.  This is because they produce electricity when they can, rather than when they are ordered to by the utilities, as is the case with most other forms of electricity.  Intermittency is a huge hidden cost of these sources because it requires overbuilding capacity in order to maintain adequate levels of power when needed.

China has tried the wind and solar route and has found that coal, nuclear, and hydroelectricitiy are the energy sources for its future. In 2011, for the first time in several years, China invested less in clean energy than the United States. In 2011, the United States invested $48 billion in clean energy compared to China’s $45.5 billion.[v] On March 5, China announced that it “will accelerate the use of new-energy sources such as nuclear energy and put an end to blind expansion in industries such as solar energy and wind power in 2012.” Specifically, China expects to “develop nuclear power in 2012, actively develop hydroelectric power, tackle key problems more quickly in the exploration and development of shale gas, and increase the share of new energy and renewable energy in total energy consumption.” Thus, China is stabilizing its solar and wind power industries and promoting hydropower as the top priority in renewable energy development.[vi]

According to China’s National Energy Administration, the share of non-fossil energy consumption, including hydropower, nuclear power, wind power and solar power, declined 0.3 percentage points from 8.6 percent in 2010 to 8.3 percent in 2011. According to China’s National Bureau of Statistics, China’s coal consumption increased 9.7 percent in 2011 to a record 3.7 billion tons, more than 3.5 times the coal consumption of the United States. China’s total energy use increased 7 percent, the fastest growth in 4 years to fuel an increase in its gross domestic product of 9.2 percent. China clearly does not worry about using coal, and will most likely be importing U.S. coal as the Obama Administration continues to slowly make it disappear as a generating fuel in the U.S.[vii]

India is confronting economic problems because of the lack of energy, particularly electricity fueled by coal. These economic woes could have been avoided if policy makers had better addressed issues with the country’s electricity shortage, weak infrastructure and restrictive regulations. In the last year, the nation’s power problem grew larger, with the gap between demand and supply increasing to 10.2 percent last month, from 7.7 percent a year earlier. Because of the lack of electricity supply, many factories in some Indian states have resorted to using diesel generators at a cost about three times higher than the power grid, if that power were available.[viii]

A major problem is the country’s anemic production of coal, which provides 55 percent of its electricity. Coal production increased just 1 percent last year while power plant capacity surged 11 percent. India has large coal reserves of 67 billion tons, but because of government policies, poor management, and environmental concerns, utility companies have problems getting coal from the state-owned coal company mines. Some coal is imported, primarily from Indonesia, but its price just doubled.

According to one industrial user, “It’s very frustrating. Power is a basic need. Everything is dependent on power. We have resources in India, but they aren’t able to do the proper thing,” referring to government officials. This industrial producer indicated that his production could be 30 percent higher if he had access to reliable power. As a result he had to cut his staff to 10 workers from 15 two years ago.

Germany plans to construct and modernize its generating sector and it will not be just with renewable energy. Of the 84 power stations, more than half will be fueled by fossil energy— 29 with natural gas and 17 with coal. Of the rest, 23 will be offshore wind and 10 will be pumped storage plants.[ix] The country is permanently retiring its nuclear units due to the nuclear accident in Japan last year caused by the tsunami.

Lignite (brown coal) is experiencing a renaissance in Germany. Last year, Germany generated about a quarter of its electricity from coal, increasing coal consumption by 3.3 percent. The power gap, created by the shutdown of eight nuclear power stations, is largely being filled by lignite.

Internet companies often invoke an image of environmental awareness, promoting renewable technologies. These companies use vast amounts of electricity for their data centers that store the information that entered us into a paperless world. Google, for example, indicated that its data centers consume almost 260 million watts, or about a quarter of the output of a nuclear power plant. Because these companies need reliable and inexpensive sources of electricity that are hard to find in Silicon Valley, some of them are moving facilities to North Carolina, Virginia, northeastern Illinois and other regions where coal and nuclear supply large amounts of reliable electricity.[x] The question is: “Where are these companies going to get reliable electricity once EPA regulations take effect and China imports all of our coal?”

Source: Greenpeace,” How Clean Is Your Cloud?”, April 2012, http://www.greenpeace.org/international/Global/international/publications/climate/2012/iCoal/HowCleanisYourCloud.pdf

The Obama Administration intends to kill coal in this country through regulations that will limit the amount of carbon dioxide that can be emitted. Unfortunately, this will do little to help their goals for global warming since countries like China will need it to keep their economy fueled with energy. China has learned that renewable fuels do not do the job. Our internet companies are finding the same energy needs for coal and nuclear as China and are relocating to areas of the country that have those fuels as their major generating fuels. While natural gas is cheap today, to use it to replace 42 percent of our electricity would result in extraordinary price increases since it would mean increasing its consumption and production by over 50 percent. Are we heading toward India’s economic woes because of restrictive energy policies, including killing coal in this country?