Interior Secretary Ken Salazar trumpeted the Obama Administration’s “all-of-the-above” energy policies at the National Press Club yesterday –policies that exclude oil and natural gas drilling on many federal lands and that kill coal production and consumption. Instead of making federal lands and waters owned by America open to oil and gas drilling and removing onerous regulations on fossil fuel industries, particularly coal, Secretary Salazar lashed out at Congress tantrum-like and demanded they pass legislation he wants.

His energy wish list includes a law that sanctions a proposed trans-boundary agreement with Mexico, another that codifies dubious reforms Secretary Salazar has proposed for his Interior Department’s energy permitting process, yet another that extends tax credits on the Administration’s “pet project” — renewable energy, and a mandate that consumers must purchase a major portion of their electricity from those same pet low-carbon sources.[i] While each of these issues deserves rebuttal, we look at the trans-boundary agreement he believes is so essential to our energy security and how that fits into the general scheme of oil and gas drilling in this country.

Salazar’s trans-boundary agreement with Mexico would make nearly 1.5 million acres of the U.S. Outer Continental Shelf more accessible for exploration and production of oil and gas, according to the Department of Interior’s Bureau of Ocean Energy Management (BOEM). The Department estimates that the area contains 172 million barrels of oil and 304 billion cubic feet of natural gas.[ii] It would be jointly developed by U.S. oil and gas companies and Mexico’s Petroleos Mexicanos (PEMEX).

Oil and Gas Resources in the United States

While the Administration hopes this agreement will substantiate the president’s newfound enthusiasm for domestic oil and natural gas development, the initiative leaves out millions of acres and billions of barrels of oil that can be developed on federal lands and waters. Currently, the government leases less than 2.2 percent of federal offshore areas and less than 6 percent of federal onshore lands for oil and natural gas production. Areas that the federal government could open to oil and gas development include: 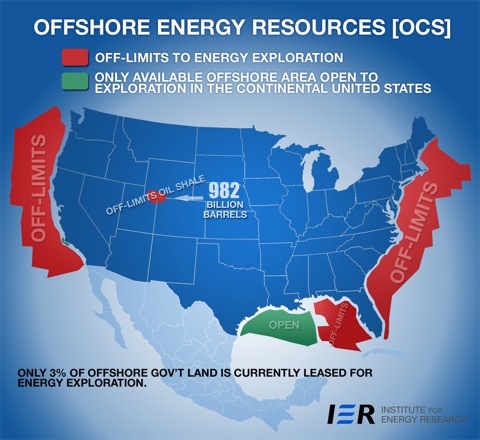 President Obama’s Administration is claiming credit for the increase in oil and natural gas production over the past few years. But, this misconstrues the facts and is an inaccurate portrayal of his administration’s record on energy issues. His administration did not hold a single offshore lease sale in fiscal year 2011, while the Bush administration planned to hold five. Those sales were rejected when the administration decided not to pursue a new 2010–2015 OCS lease plan reflecting the expiration of the presidential and congressional moratoriums on leasing in 2008. Also, President Obama’s Bureau of Land Management is setting records for the least amount of leases on average per year. President Clinton sold more than twice the number of leases per year than Secretary Salazar has under President Obama.[v] 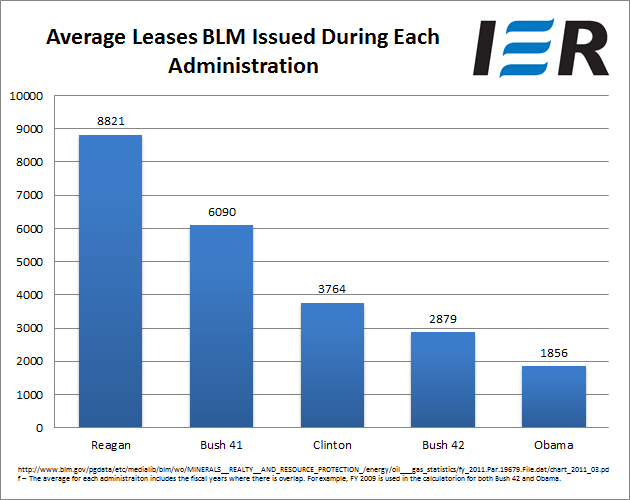 Further oil and gas production on federal lands is falling due to President Obama’s energy policies. The Energy Information Administration (EIA) in its report, Sales of Fossil Fuels Produced on Federal and Indian Lands, FY 2003 Through FY 2011 shows that crude oil production on Federal and Indian lands was 13 percent lower in fiscal year 2011 than in fiscal year 2010, mainly due to the President’s moratorium on offshore drilling after the oil spill accident in the Gulf of Mexico.

Likewise, the Congressional Research Service in its report, U.S. Crude Oil Production in Federal and Non-Federal Areas, shows that 96 percent of the oil production growth between fiscal year 2007 and fiscal year 2011 occurred on private and state lands.[vi] Further, natural gas production on Federal and Indian lands is the lowest in the 9 years that EIA reports federal production data and is 10 percent lower than in fiscal year 2010, most likely because there are far fewer bureaucratic procedures to drill on private and state lands than federal lands.[vii] 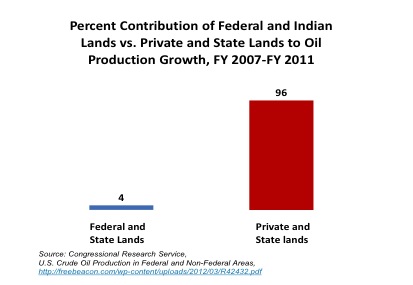 Secretary Salazar and the Obama Administration would like to take credit for energy development.  But it is American hard work, technological ingenuity and investment that has produced this energy miracle, and the private sector has made it possible. Moreover, they would like to take credit for pursuing an “all-of-the-above” energy policy that unfortunately excludes oil and gas development on much of our federal lands and kills coal through regulation. Americans need to be skeptical regarding President Obama’s energy claims and resistant to his policies.  Under the Obama energy program, only a tiny fraction of our energy resource potential is available, despite election year gimmickry and oft-repeated propaganda from the lips of Secretary Salazar.

The Dwindling Share of Coal: What Does It Mean?