In a recent article in the Washington Post, Senator Sheldon Whitehouse (D-RI) compared the opponents of federal regulations and taxes on greenhouse gas emissions to tobacco companies who denied the dangers of smoking. Yet beyond the implicit admission that he’s only got name-calling to rely on at this point, is the fact that we can use the “consensus science” contained in the IPCC reports to show that the alarmist climate agenda makes no economic sense. Indeed, back when I testified before the Senate Environment and Public Works committee, Whitehouse’s colleague Sen. Ben Cardin chuckled in disbelief at my claims—apparently not realizing that I had merely been describing one of the computer models chosen by the Obama Administration’s own Working Group. Most of my writings on climate policy here at IER rely on the “published science”—it’s people like Senator Whitehouse who have to bamboozle the public into supporting his agenda.

Internet enthusiasts are quite familiar with Godwin’s Law, which says that the longer an online argument continues, eventually someone will compare his opponent to Hitler. Well we have already had that for years in the debates over climate policy. Those favoring aggressive government intervention aren’t content to call coal, oil, and gas “dirty energy,” or to label carbon dioxide emissions “pollution”—even though trees breathe it and we exhale it. No, the alarmists go even further with their rhetorical smears, routinely calling their opponents “deniers,” making an obvious (and intended) comparison to the Holocaust.

In his recent piece, Senator Whitehouse has decided that the Nazis apparently aren’t bad enough, so he’s bringing in lung cancer. Here’s Whitehouse doing his part to elevate the debate and educate Americans on atmospheric physics:

The tobacco industry was proved to have conducted research that showed the direct opposite of what the industry stated publicly — namely, that tobacco use had serious health effects. Civil discovery would reveal whether and to what extent the fossil fuel industry has crossed this same line. We do know that it has funded research that — to its benefit — directly contradicts the vast majority of peer-reviewed climate science. One scientist who consistently published papers downplaying the role of carbon emissions in climate change, Willie Soon, reportedly received more than half of his funding from oil and electric utility interests: more than $1.2 million.

To be clear: I don’t know whether the fossil fuel industry and its allies engaged in the same kind of racketeering activity as the tobacco industry. We don’t have enough information to make that conclusion. Perhaps it’s all smoke and no fire. But there’s an awful lot of smoke.

And by the same token, I don’t know whether Senator Whitehouse has been engaged in racketeering. But there are a lot of people in Washington doing a lot of crooked stuff. Let’s just throw around some accusations without specifics—why not?

I would take the shock, shock over industry funding more seriously if it weren’t so hypocritical. Does Senator Whitehouse get suspicious when the people working on government-funded reports end up with a conclusion that favors more money and power for the government? (Remember, even pro-carbon tax people admit that scientists have tinkered with their models and forecasts to suit the needs of politicians.) Dr. Jonathan Gruber, one of the intellectual architects of the Affordable Care Act, received millions in taxpayer money for his work. Does Senator Whitehouse want to launch an investigation into ObamaCare?

Of course not. The reason Senator Whitehouse trusts experts who want to expand government power—even when they get funded by the government—is that Whitehouse agrees with them on these issues. Somebody’s funding is only an issue when Whitehouse (or other critics) dispute the conclusions. So let’s stick to the actual science and we’ll see that it doesn’t support Senator Whitehouse’s agenda.

Here are some inconvenient truths coming straight from either the IPCC documents or from computer models used by the Obama Administration when it comes to climate policy. I hope Senator Whitehouse will do everything in his power to broadcast these facts to his constituents, in light of his commitment to truth and educating the public.

1.) Even if the United States reduced carbon dioxide emissions immediately to zero, and if we take the IPCC’s middling estimate of climate sensitivity, this unilateral American action would reduce global temperature in the year 2100 by 0.14 degrees Celsius. Of course, if the U.S. reduction in emissions were less than a complete cessation, the effect on global temperature would be smaller still.

2.) The suite of climate models used by the IPCC have over-predicted the amount of warming we should have seen in the last decade, in light of the increase in carbon dioxide concentrations in the atmosphere. The following chart is taken from University of Alabama’s John Christy’s recent testimony to the House Committee on Natural Resources: 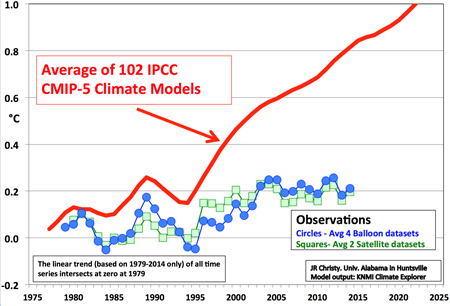 3.) The Obama Administration’s own Working Group report on the “social cost of carbon” informs us that the figures they produced are global. So when proposed federal regulations that will impose costs on American businesses and households are scored for their “climate benefits,” only 7 percent (using one method of adjustment) will actually accrue to Americans. That means if a federal regulation ostensibly passes a cost/benefit test because of its role in reducing CO2 emissions, that Americans will bear a majority of those costs while receiving possibly as little as 7 percent of the benefits. To repeat, this is accepting the entire Obama Administration Working Group project at face value, using their own numbers.

4.) One of the three computer models chosen by the Obama Administration to estimate the effects of emissions shows that global warming showers net external benefits on humanity up to about 3 degrees Celsius, which will carry us through mid-century according to the standard models used for the IPCC projections. Here is the chart taken from the Administration’s own Working Group report: 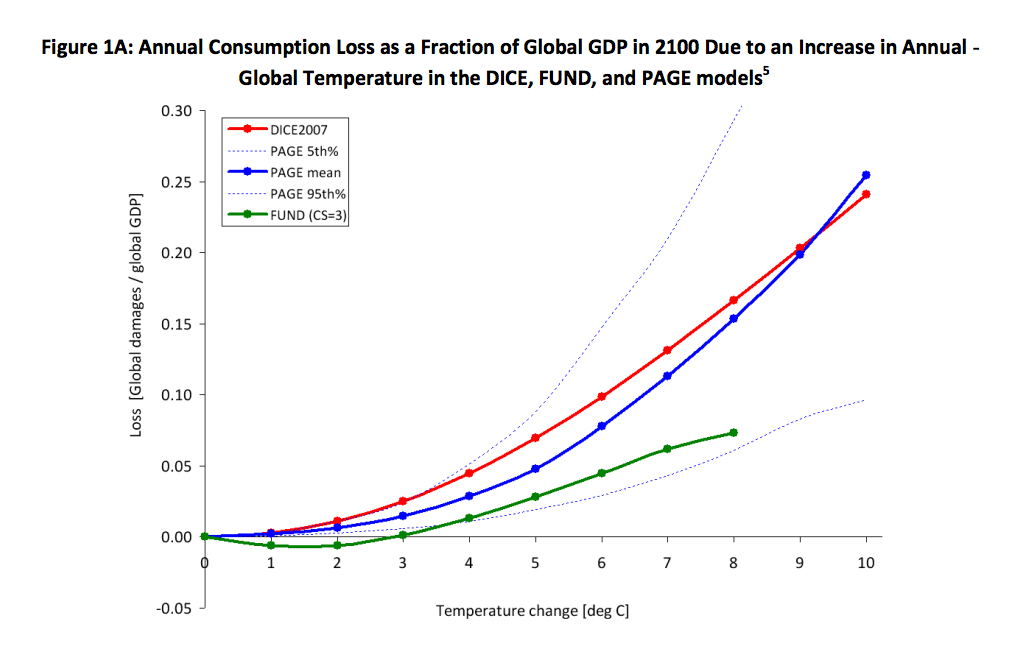 In the chart above, the green line refers to the FUND model developed primarily by Richard Tol, one of the world’s leading experts on climate change economics. The fact that the green line is negative in the early part of the graph means that global warming helps humanity beyond the direct benefits of affordable energy and so forth.[1] So when people say, “We are already observing the ravages of climate change, we need to reverse course!” they are ignoring the conclusions of a leading expert who was selected by the Obama team.

The irony here is that I discussed the above result during my brief testimony on the “social cost of carbon” to the Senate’s Committee on Environment and Public Works. During his remarks, Senator Whitehouse (who was on the committee) naturally disputed my testimony, and his colleague Senator Ben Cardin (D-MD) scoffed at the idea that moderate increases in global temperatures could help humanity, thinking I must have been grasping at straws. (Look at the video starting at 2:08:35.) His staffers either didn’t know, or didn’t tell him, that this result was in the Obama Administration’s own report on the social cost of carbon.

More generally, it really shouldn’t be surprising that a changing climate could convey benefits in some respects and harms in others, and that on net humanity is helped. For example, Senator Whitehouse could look at Rhode Island’s own geological history, which reports his state being gouged by two waves of glaciers, and that (some 12,000 years ago) sea levels were hundreds of feet lower than today. If he is particularly ambitious, Senator Whitehouse could read this short journal article on Rhode Island’s “Deep Freeze,” which describes the advance and retreat of glaciers that occurred some 17,000 years ago.

5.) Using the latest IPCC Fifth Assessment Report (AR5), I can step-by-step show that if we look at middle-of-the-road projections, then even supposedly modest goals such as limiting global temperature increases to 2 degrees Celsius involve more economic damage than what would occur from unrestricted climate change if governments took no action. In other words, I can use nothing but data from the IPCC’s latest report to show that most likely it will be better for humanity if governments “do nothing” about climate change for the rest of this century than if they act to achieve a popular goal that most alarmists think is the bare minimum that should be done.

In case the readers find this hard to believe, I encourage them to listen to this recent interview with Harvard’s Martin Weitzman, who is one of the leading economic theorists on the side of those pushing for aggressive government intervention. As Weitzman admits early in the interview, he thinks the most useful approach is to view climate policy as a form of insurance against a bad outcome that probably won’t happen.

Not content to demonize his opponents with Holocaust references, Senator Whitehouse is now arguing that those challenging the case for aggressive government intervention in the name of climate change are akin to the tobacco industry denying the harms of smoking.

This analogy is sorely lacking. If the Surgeon General had issued a report showing that smoking would improve health up to the first three packs, that in most cases cutting back on smoking would harm people more than it would help them, and that all of the previous warnings about smoking had been wildly off the mark, then maybe Whitehouse would have a good analogy. But in that case, people quoting from the Surgeon General’s report would hardly be “denying science,” they would simply be telling Americans what the government’s own experts were saying.

Fuels rich in carbon content—coal, oil, and to a lesser extent, natural gas—currently provide the backbone of affordable, dependable energy for billions of people not just in the United States but also around the globe. Carbon dioxide itself is an odorless gas that is quintessentially natural, the equivalent of oxygen for plant life. When he compares fossil fuels to cigarettes, it makes us wonder what Senator Whitehouse is smoking.

[1] To be clear, economist Richard Tol favors government action against greenhouse gas emissions, though he is much more moderate than many others. He describes the coming benefits from moderate global warming as “sunk benefits,” meaning that those advantages will accrue to humans regardless of what policymakers do over the next few decades. Nonetheless, his model—again, which was chosen by the Obama Administration in recognition of Tol’s leadership in the field—shows the baselessness of the alarmist rhetoric on climate change.