Alaska has some of the highest electricity and gasoline prices in the country, which is not surprising because Alaska is large, remote, and sparsely populated. These factors lead to high costs for both gasoline and electricity. Even though Alaska has vast coal reserves, natural gas produces the majority of the state’s electricity. Alaska’s rivers and mountains make it well-suited for hydropower, which produces a fifth of Alaska’s electricity. Alaska produces a higher percentage of its electricity from petroleum liquids than almost any other state because many remote rural communities use diesel to generate electricity. Though Alaska is considered to have substantial wind energy potential, wind contributes minimally to the state’s current electricity supply. The oil and gas industry dominates the Alaskan economy, and production activities drive the state’s energy demand. Although Alaska has a low total energy demand compared to the U.S. average, its per capita energy consumption is one of the highest in the country.

Alaska is an oil rich state, but Alaska’s oil production is falling. In 2011, Alaska was the 2nd largest oil producing state, but today Alaska has slipped to the 4th largest oil producer. The reason is because the federal government severely limits oil production on federal lands. The federal government owns nearly 70 percent of Alaska’s land and controls the vast majority of offshore areas as well. Alaska’s prolific oil fields at Prudhoe Bay and Kuparuk River are located on state land. 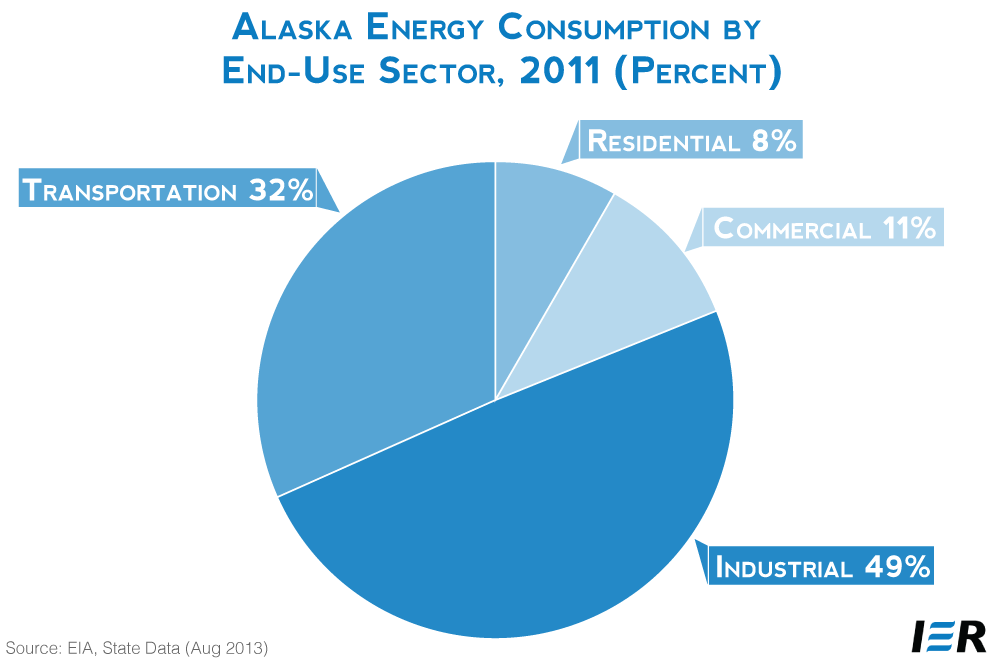 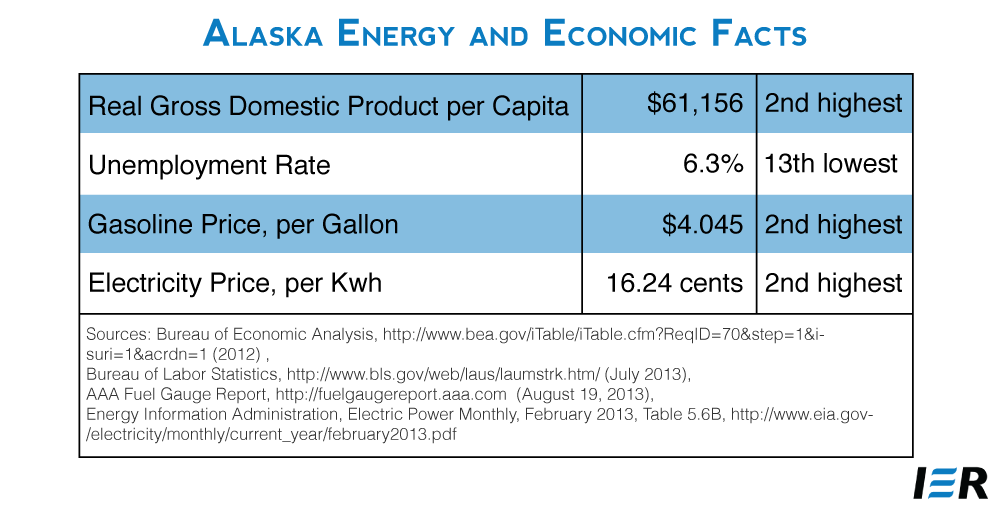 Alaska ranks fourth among the states in oil production, behind Texas, North Dakota, and California. Alaska has vast oil resources found in the Alaska North Slope and Cook Inlet basins, the Arctic Natural Wildlife Refuge (ANWR), the Naval Petroleum Reserve-Alaska (NPRA), and off its coasts. The Alaska North Slope contains 14 of the 100 largest oil fields in the United States. The North Slope’s Prudhoe Bay field is located on state lands 400 miles north of Fairbanks and is the largest oil field in the country. It was originally estimated to contain 25 billion barrels of oil.

Due to Obama administration policies, oil is currently only being produced on Alaska’s North Slope and Cook Inlet basins where oil reserves total 3,852 million barrels and annual production is currently at about 16 million barrels. The majority of the state’s oil production is from the North Slope where the  Trans-Alaska Pipeline System (TAPS) transports the crude oil 800 miles from the North Slope oil fields to the Port of Valdez on Alaska’s southern coast. Production started in June, 1977 at the completion of TAPS. Oil production from Alaska’s North Slope peaked in 1988 at 2 million barrels per day, and has since fallen to about a quarter of that amount. It is expected to decline further, falling below 0.35 million barrels per day by 2035, according to forecasts from the Energy information Administration. TAPS has transported over 15 billion barrels of crude oil[, but because it is now carrying oil at about a quarter of its capacity, increased risks of corrosion and leaks can be expected according to experts. 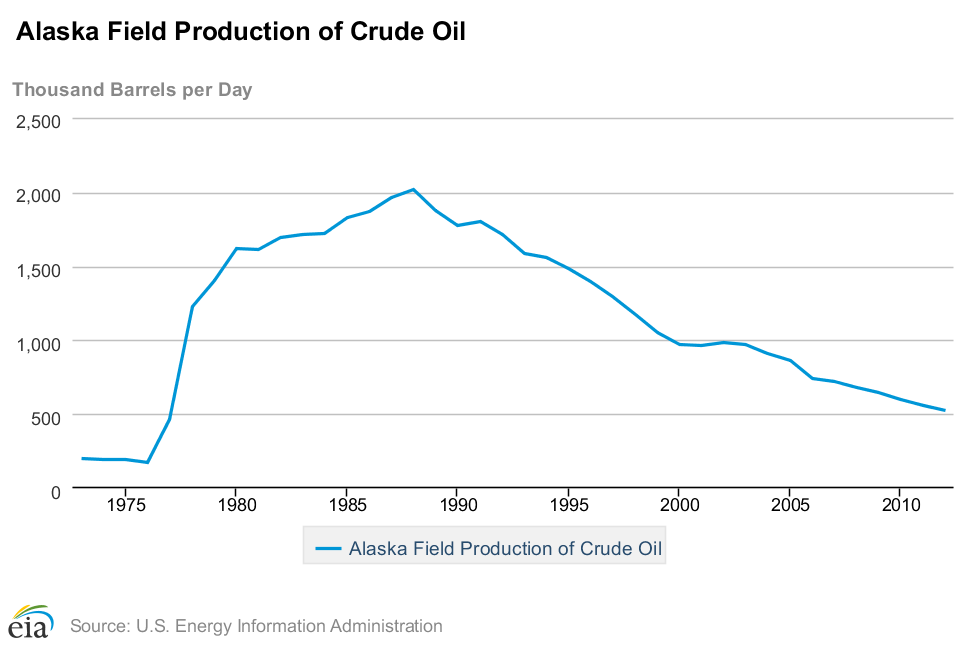 Because demand for petroleum products in Alaska is low, tankers primarily ship the crude oil from Valdez to refineries along the West Coast, which are designed to process the intermediate, high-sulfur crude oil from Alaska’s North Slope. Alaska has six refineries, but most of them are “topping” plants that strip away lighter products from the TAPS crude oil stream for internal refinery use. Alaska’s motor gasoline demand is primarily met by refineries in Kenai and near Fairbanks. Because of the state’s geography and size (more than twice the size of Texas), a good deal of personnel and goods transport is met by plane, ranking Alaska as the highest per-capita jet fuel consuming state in the Nation. 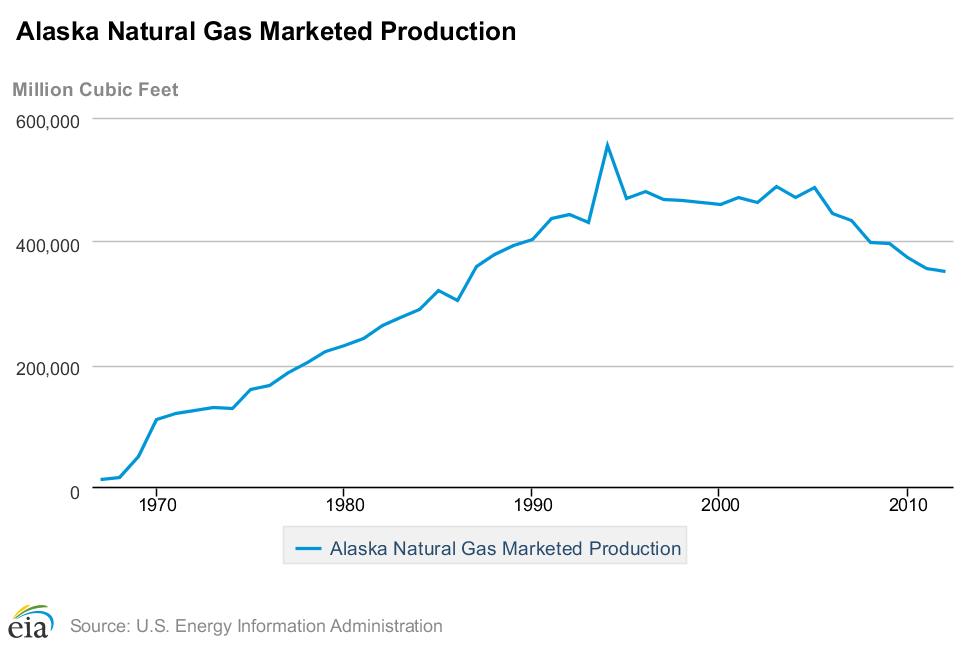 Although large volumes of natural gas are extracted during oil production on the Alaskan North Slope, it is pumped back into the ground for re-pressurization or used as lease fuel to operate equipment at oil production facilities because the natural gas has no way of reaching end-use markets. Although project applications have been filed with the State of Alaska for a natural gas pipeline from the North Slope, so far it has not been considered commercially feasible to construct a natural gas pipeline from the North Slope to markets in the lower 48 states.

About one-fourth of Alaska’s marketed natural gas production is delivered to customers, of which, the electric power industry is the largest. Because Alaskan natural gas is abundant and inexpensive, Alaska has a petrochemicals industry that produces ammonia and fertilizer. Alaska also exports liquefied natural gas (LNG) via the Kenai liquefied natural gas terminal in the Cook Inlet, primarily to Japan. Currently, Kenai is the only LNG export terminal in the United States, but the Department of Energy has approved other LNG export facilities in the lower 48 states.

Substantial coal deposits are found in Alaska’s bituminous, subbituminous, and lignite coal basins. However, while Alaska has more technically recoverable coal than the entire lower 48 States, production is limited due to a lack of infrastructure.

Alaska’s electricity infrastructure is different from that of the lower 48 States because most Alaskan communities are not tied into a large, interconnected grid through transmission and distribution lines. While an interconnected grid does exist in the populated areas from Fairbanks to the south of Anchorage, most rural communities must rely on their own power sources, which almost exclusively consist of diesel electric generators.

More than 50 hydroelectric power plants supply Alaskan communities, and three of those plants are among the ten largest generators in the state. Alaska’s renewable energy sources also include a 200-kilowatt geothermal plant at Chena Hot Springs and a number of small wind energy projects. One of the nation’s largest fuel cell systems is located in Anchorage. Alaska also has the world’s largest battery storage system. 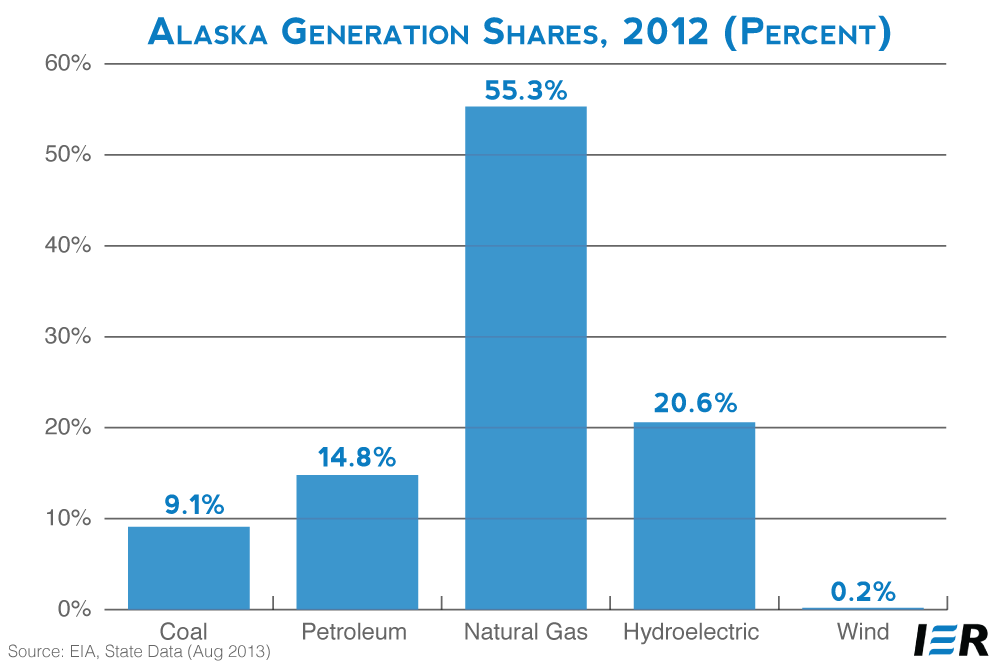 Below are some facts about Alaska’s regulatory environment that are likely to affect the cost of energy or the cost of using energy. Although affordable energy is a vital component of a healthy economy, regulations frequently increase energy costs.

Alaska does not provide a cap on greenhouse gas emissions. But, Alaska is an observer of the Western Climate Initiative (WCI), a regional agreement among some American governors and Canadian premiers to target greenhouse gas reductions. The central component of this agreement is the eventual enactment of a cap-and-trade scheme to reduce greenhouse gas emissions 15 percent below 2005 levels by 2020. As an observer of the WCI, Alaska would not be bound to agreements made by WCI members. In 2011, many of the states left the WCI leaving only California and the Canadian provinces British Columbia, Manitoba, Ontario and Quebec.

Carbon dioxide, the largest occurring greenhouse gas, is a natural byproduct of the combustion of all carbon-containing fuels, such as natural gas, petroleum, coal, wood, and other organic materials, including biofuels. Today, there is no cost-effective way to capture the carbon dioxide output of the combustion of these fuels, so any regulations that limit carbon dioxide emissions will either limit the use of natural gas, petroleum, and coal, or dramatically increase their prices.

Unlike more than half of the U.S. states, Alaska does not have a renewable portfolio standard requiring a certain percentage of is electric generation to come from qualified renewable technologies.

In October 2009, the Regulatory Commission of Alaska approved net metering regulations, which became effective January 15, 2010. All electric utilities subject to economic regulation are required to offer net metering, but independent systems with retail sales of less than 5,000,000 kilowatt-hours are exempt. Also exempt are utilities that generate 100 percent of electricity from certain approved renewable energy sources and other approved sources that have a low environmental impact. Renewable energy systems with a capacity up to 25 kilowatts are eligible for net metering, but overall enrollment is limited to 1.5 percent of a utility’s retail sales from the previous year.

Alaska requires new residential and commercial buildings to meet energy efficiency standards.  The state’s 2011 Building Energy Efficiency Standards (BEES), which apply to both residential and commercial buildings, are based on the 2009 International Energy Conservation Code (IECC), with Alaskan amendments that require additional insulation in buildings in northern Alaska. The IECC, developed by the International Code Council, is a model code that mandates certain energy efficiency standards.

Alaska has vast fossil fuel resources, but access is limited by government policies in the case of oil and due to infrastructure limitations in the case of coal and natural gas. It has the second highest gasoline and electricity prices in the nation due mainly to its isolated geographic location. Since its electricity grid is limited to some populated areas, electricity generation for its rural areas is produced by diesel generators.  Also due to its geography, it has the highest per-capita jet fuel consumption in the nation. Due to abundant and relatively inexpensive natural gas, half of its energy consumption is used by the industrial sector for fertilizer and ammonia production. While likely to change in the near future, Alaska has the only LNG export terminal in the nation, supplying primarily Japan.