Last week OPEC+ talks on oil production quotas for member nations stalled and, as a result, oil prices rose. The Biden administration is somewhat concerned about the increase in oil prices and in response to the OPEC+ stalemate, a Biden administration spokesperson stated, “Administration officials have been engaged with relevant capitals to urge a compromise solution that will allow proposed production increases to move forward.” Instead of calling on countries like Russia and Saudi Arabia to increase their oil production through investment and hiring more people, the Biden administration could reverse its anti-energy prices in the United States and oil prices would likely decrease. Our economy might also receive a shot in the from increased production. After all, the U.S. has been the biggest contributor to the decrease in global oil prices over the past 10 years by supplying the oil market with the majority of new oil over the past decade.

From 2010-2019, 81 Percent of the Global Increase in Oil Production Came From the United States

For decades, people have not thought of the United States as an energy superpower. Too many people were stuck in the mindset that the United States could not do anything about oil prices—that we had too little oil reserves to meaningfully impact global prices. This worldview was perfectly encapsulated by President Obama, when he stated in 2012, “we can’t just drill our way to lower gas prices.” But the United States did exactly that. 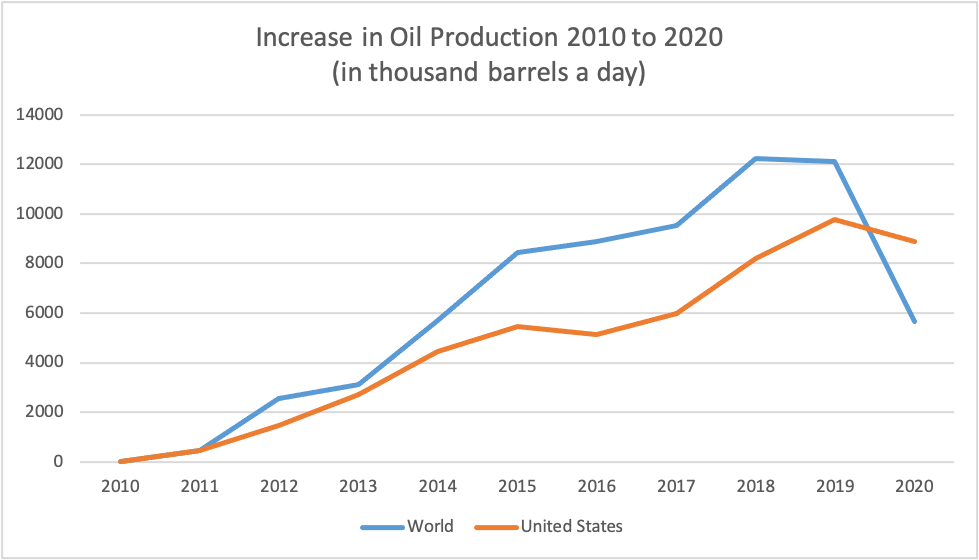 It is very likely that Russia and OPEC could have increased their oil production over the past 10 years and further reduced prices, but Russia and OPEC were more interested in maximizing their revenues instead of supplying the market with more oil.

The impact of all of this oil production from the United States led to downward pressure on oil prices over the past 10 years. In the oil price chart below you can see what looked to be a long-term run up in the price of oil after the 1990s stalled in the early 2010s and then decreased by more than 50 percent. A greater supply of oil, the majority of which came from the United States, is a key reason for this price decrease.

IER has as long noted how U.S. oil production has helped keep oil prices in check. For example, in 2014 we explained how U.S. oil production growth more than offset unplanned disruptions to the world’s oil supply and in 2008, we explained how ending bans on offshore drilling led to immediate price relief.  Market signals about probable government actions also drive prices sooner than the actions’ actual effect. 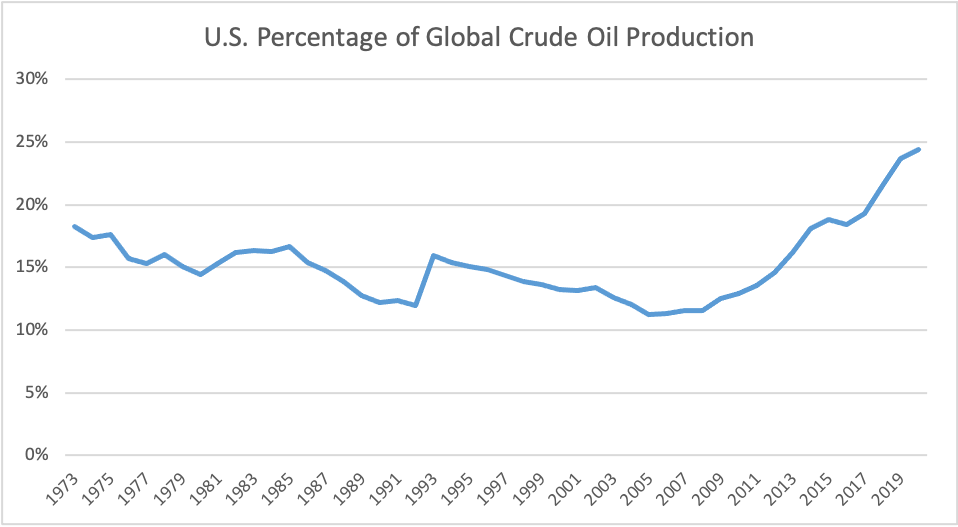 As has been amply demonstrated over the past decade, we can drill our way to lower gas prices. We did it. But while the Biden Administration would like to see oil production increases in OPEC+ countries, they are taking action after action to hamstring domestic (and Canadian) oil production. As a result of policies such as canceling President Biden is signaling to oil markets that it will be harder for the U.S. to produce oil in the future. It’s no wonder oil prices recently hit the highest level in nearly 7 years.

If President Biden wanted to see lower oil prices, he would reverse course on his anti-energy policies. But the reality is that high oil prices would help the electric vehicle market and “nudging” more drivers into EVs is a key policy objective of the Administration.

We can expect to see additional policies from the Administration that will drive up prices at the pump while at the same time the Administration asks other countries like Russia and Saudi Arabia to produce more oil. After all, President Biden promised it during the campaign.

Connecticut and Rhode Island Wisely Say No to TCI