Oil Production at a 25 Year High 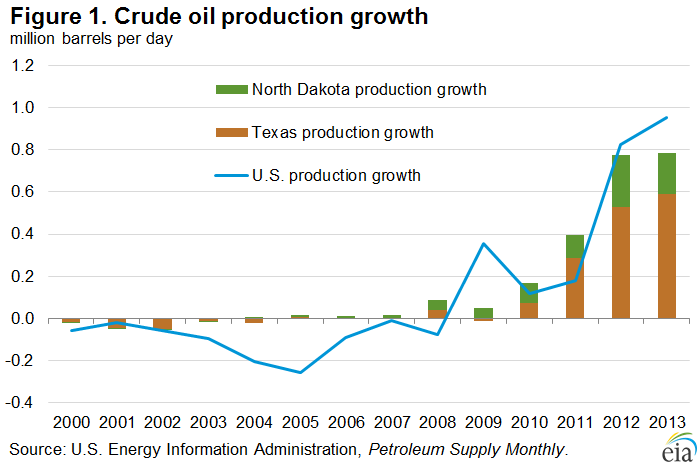 The record crude oil production pushed refinery utilization up to 88 percent for 2013 from 83 percent in 2009. 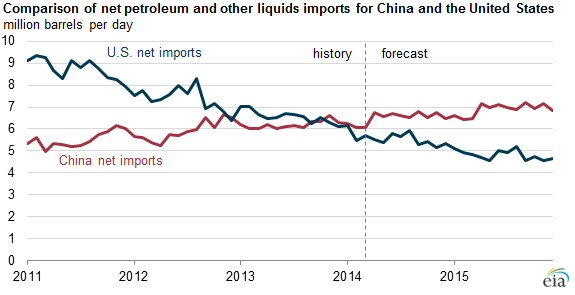 In recent years, China has been diversifying the sources of its crude oil imports due to its oil demand growth and geopolitical uncertainties. Saudi Arabia continues to be the largest supplier of crude oil to China, providing 19 percent of China’s 5.6 million barrels per day of imports in 2013. China also imports from Oman, Iraq, the United Arab Emirates, Angola, Venezuela, Russia, Iran, Libya, and Sudan and South Sudan.[iii]

The U.S. oil production boom has created a boom in oil rail shipments, particularly given that the Keystone XL pipeline has been delayed by the Obama Administration for over 5 years now. According to the Association of American Railroads, major U.S. railways delivered 434,042 carloads of crude oil in 2013, 83 percent more than the amount shipped in 2012 (236,556 carloads of crude oil).[iv]

The U.S. energy boom is also having an effect on the country’s shipbuilding industry. Just three years ago, the oil tanker market was dormant in the United States, but was changed by the shale oil boom and the need to move the oil to refiners in the United States. According to the American Maritime Partnership, there are more than 15 oil tankers, along with hundreds of smaller tugs and barges, on order at U.S. shipyards across the country.  And it will take years to build them.

For example, two oil tankers are being constructed at the Aker Philadelphia Shipyard for SeaRiver Maritime, a subsidiary of Exxon Mobil, at a cost of $200 million each. To build the tankers, it takes about 1,000 employees, working more than a year.  The shipyard has orders for four more tankers and two container ships.[v]

While the domestic energy supply is booming, oil companies cannot use foreign ships to move oil and gas around the country due to a 1920 federal law called the Jones Act. Due to the Jones Act, vessels can only move between U.S. ports if they are flagged under U.S. law, crewed by American citizens and built in U.S. shipyards.  Since World War II, shipbuilding in the United States has declined dramatically with only a handful of major shipyards now constructing ships, mostly for the Navy. Thus, the industry is having a hard time meeting the demand for merchant ships at an affordable price. The cost of construction is about three times as much at U.S. shipyards as it is in shipyards in China, Japan and South Korea.

Advanced techniques like horizontal drilling and hydraulic fracturing have turned  our shale oil resources into an oil production bonanza that is reducing our dependence on foreign oil and creating a boom in rail shipments of crude oil and oil tanker construction. They have also helped to make the United States rank second to China in net crude oil and petroleum imports since September of last year.

But the industry is being hampered by Federal laws and policies that are making it difficult to move the crude oil around the country and to help our allies. Lack of adequate access to federal energy resources, a ban on crude oil exports in effect since 1975 due to the 1973 Arab Oil Embargo, a 5-year delay in providing a permit for the Keystone XL pipeline, and the 1920s Jones Act are all having  negative effects on the potential growth opportunity that domestic production promises. The Jones Act  has induced the construction of  over 15 tankers in  U.S. shipyards, which will take years to build, and make energy companies rely on rail, existing pipelines and road transport to move domestic oil and gas around the country.