Reliable energy sources and a diverse fuel mix are integral to maintaining America’s electric grid and keeping the lights on. The electric grid must be carefully balanced at all times so that supply matches demand or otherwise blackout would occur. This means that the grid needs reliable sources of generation to keep supply and demand matched at all times. New data on the polar vortex that swept the nation in January show how difficult this can be and highlight the perils of government policies designed to replace reliable energy sources with intermittent ones.

What we already know: as temperatures dropped across the country in early January, the cold weather increased demand for natural gas used both for home heating and for gas-fired electric generators. Surging demand, combined with constrained pipeline capacity, led to spiking prices and inadequate natural gas supplies (some customers had their natural gas service interrupted).

To meet the increased electricity demand and prevent power outages, grid operators relied on coal, nuclear, and even petroleum generating units. Wind energy, on the other hand, actually performed worst when it was needed most, according to new data from the PJM Interconnection. This further debunks the wind industry’s claim that wind energy plays an important role in keeping the lights on during low temperature events.

PJM’s data also highlight a fatal flaw in EPA’s proposed ban on coal-fired power plants. EPA assumes that no new coal plants will be built in the foreseeable future, but EPA failed to see that the problems caused by constrained pipeline capacity and a dwindling number of coal-fired power plants. EPA is causing coal facilities to shutter while subsidized and ill-timed wind power continues to force the premature closure of nuclear plants, creating an absence of reliable alternatives to natural gas and leaving Americans vulnerable to future and more dramatic price shocks.

The PJM Interconnection is a regional grid operator that serves all or parts of 13 Northeastern, Mid Atlantic, and Midwestern states and the District of Columbia. Coal, nuclear, and natural gas together comprise 75 percent of the PJM’s electrical generating capacity (41 percent, 18 percent, and 16 percent, respectively). Wind energy accounts for less than one half of one percent of installed capacity.

In early January, the polar vortex increased energy demand and drove up natural gas prices. As temperatures plunged and demand rose, nuclear and coal generators picked up the slack. In contrast, according to PJM data, wind energy generation dropped from 4 gigawatts (GW) on January 6 to less than 2 GW during demand peaks on January 7 and less than 800 megawatts (MW) on January 9. The following graph from PJM compares grid load to wind generation during the height of the polar vortex. 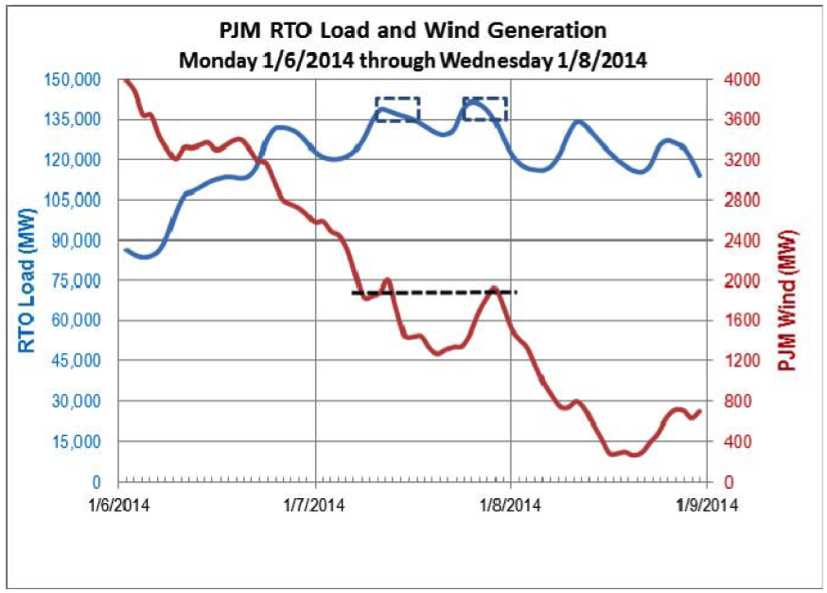 While wind production declined steadily as demand rose, nuclear provided a reliable supply of generation to meet demand. Between January 4 and 8, the nation’s nuclear fleet operated at more than 95 percent of capacity, according to the Nuclear Energy Institute.

To illustrate the reliability differences between nuclear and wind, consider this. During the polar vortex, AWEA claimed “wind energy provided massive quantities of extremely valuable electricity when grid operators needed it most,” particularly in Texas, where wind made the “critical difference” in preventing outages. Far from providing “massive quantities” of energy, IER’s analysis found that wind energy operated at just 17 percent of its total capacity in Texas during the polar vortex. AWEA congratulates its industry for production at 17 percent of capacity while nuclear operating at 95 percent capacity goes unrecognized.

PJM’s data demonstrate that wind energy cannot be relied on to provide significant amounts of energy during peak demand. Unlike nuclear, coal, and natural gas, wind is an inherently variable energy source whose output is dictated by Mother Nature, not by consumer demand, prices, or emergency orders. This is why ERCOT, the Texas grid operator, counts only 8.7 percent of its wind capacity toward its reserve level.

The polar vortex shows the value of reliable energy to the electric grid. It also highlights the perils of government regulations designed to undermine reliable energy. The Nuclear Regulatory Commission put 38 nuclear units on a retirement list due to a number of factors, including regulatory costs. If all 38 at-risk units were prematurely retired, about one-third of the U.S. nuclear fleet would be shut down. Compounding this problem is the fact that few new nuclear units are scheduled to come on line to replace existing units. This means nuclear power’s contribution to the U.S. energy mix is likely to shrink.

Regulations are also forcing many coal plants into early retirement. EPA regulations will shutter 60 gigawatts, or 20 percent, of the nation’s coal-fired generating capacity by 2016, coinciding with the first year of enforcement for EPA’s Mercury Air Toxics Standards (MATS). But that’s not all, this summer EPA will propose carbon dioxide emission restrictions on existing coal-fired power plants. According to the Energy Information Administration, coal currently provides nearly 40 percent of America’s electricity, but this will decrease under EPA’s regulatory onslaught.

Reliable energy sources like nuclear and coal are needed to maintain the integrity of the electric grid, especially during peak demand. Onerous regulations aimed at shuttering reliable energy sources threaten to undermine grid reliability. In testimony before Congress in December, Philip Moeller, a commissioner for the Federal Energy Regulatory Commission (FERC), warned that the Midwest could experience rolling blackouts in 2016 due a shortfall of coal reserves after the MATS rule takes effect. Given FERC’s central role in ensuring the reliability of the nation’s power grid, policymakers should take notice when Commissioners signal that the grid is facing real reliability issues. Commissioner Moeller did not mention wind energy as a solution to the shortfall.

Reliable energy sources and a diverse fuel mix are essential to the electric grid. When natural gas prices spiked in early January amid record low temperatures, grid operators leaned on nuclear and coal to prevent power outages. These sources performed admirably, with nuclear operating at an average capacity of more than 95 percent.

Wind energy, unlike nuclear, coal, and natural gas, cannot be relied on to provide significant amounts of energy when it is needed most. In fact, wind energy actually became less reliable to the PJM grid operator during the polar vortex as temperatures dropped and demand soared. Even in Texas, where the wind industry claimed victory for the “massive quantities” of wind energy supplied to the grid during the polar vortex, wind energy operated at just 17 percent of its total capacity.

Onerous regulations imperil America’s supply of reliable energy, which in turn threatens grid reliability. EPA regulations, especially the MATS rule, will shutter 20 percent of U.S. coal-fired generating capacity by 2016 and more will close with EPA’s carbon dioxide restrictions. Meanwhile, almost 40 percent of the U.S. nuclear fleet has been put on a list of potential retirements. The polar vortex provides further evidence that government policies should support reliable energy, not undermine grid reliability. Failure to change course will only result in more of the same—price shocks, supply interruptions, and unreliable power.