Last summer, in advance of Australia’s monumental September 7 elections that served as a repudiation of Australia’s carbon tax, IER published a key study by Dr. Alex Robson on the history and impact of the tax. Robson’s critique of Australia’s carbon tax was particularly relevant for the US policy debate, because he showed none of the promised benefits of a carbon (such as a more efficient tax and regulatory code, or “policy certainty”) actually happened in Australia. We are very pleased to report that a version of Robson’s study has now been through the academic peer-review process, and has been published in the February 2014 issue of Economic Affairs.

When the study first came out, there was a predictable backlash from those pushing for a U.S. carbon tax. After all, it was embarrassing to see that none of their hypotheticals about the wonders of a carbon tax actually came true in the real-world experiment in Australia. But what could the critics do? The author of the IER study, Alex Robson, was an obvious expert, a PhD economist teaching at an Australian university who had published technical articles on the interaction of climate policy and public finance.

In this context, there wasn’t much the critics could do, but they gave it their best. They did things like point out that just because Australia’s unemployment went up hand-in-hand with the new carbon tax, didn’t prove the carbon tax had anything to do with it. (However, in addition to showing a chart with the obvious correlation between the carbon tax and rising unemployment, Robson also provided several anecdotes of business owners who specifically laid off workers because of the carbon tax).

At the time, we walked through the ridiculous objections (some made by critics who complained about the IER study to a reporter but wished to remain anonymous); you can read our full response here. Yet one of the objections is worth revisiting. In September 5, 2013 E&E News article by Evan Lehmann, titled, “Energy group launches political attacks on carbon tax supporters,” here’s how one critic hit back at us and our Australia study:

Ray Kopp, an economist who directs the Center for Climate and Electricity Policy at Resources for the Future, said that the conclusions in IER’s report “simply do not align with the bulk of analyses” on carbon taxes.

“Not to speak disparagingly of IER, but they are not going to get their stuff in the peer-reviewed literature,” he added.

Well, sorry to say Dr. Kopp, but yes, Dr. Robson “got his stuff” in the peer-reviewed literature. Snarkiness aside, it should surprise no one who carefully read the Australia study that (a version of it) was published in a peer-reviewed outlet. Robson is quite meticulous in laying out the standard textbook arguments about a carbon tax, and then simply investigating what actually happened in practice in Australia. Fortunately, some peer-reviewed journals are interested in seeing whether the confident predictions of academics like Kopp turn out to be true.

In closing the present post, let’s review two of my favorite graphs from the Australia study. 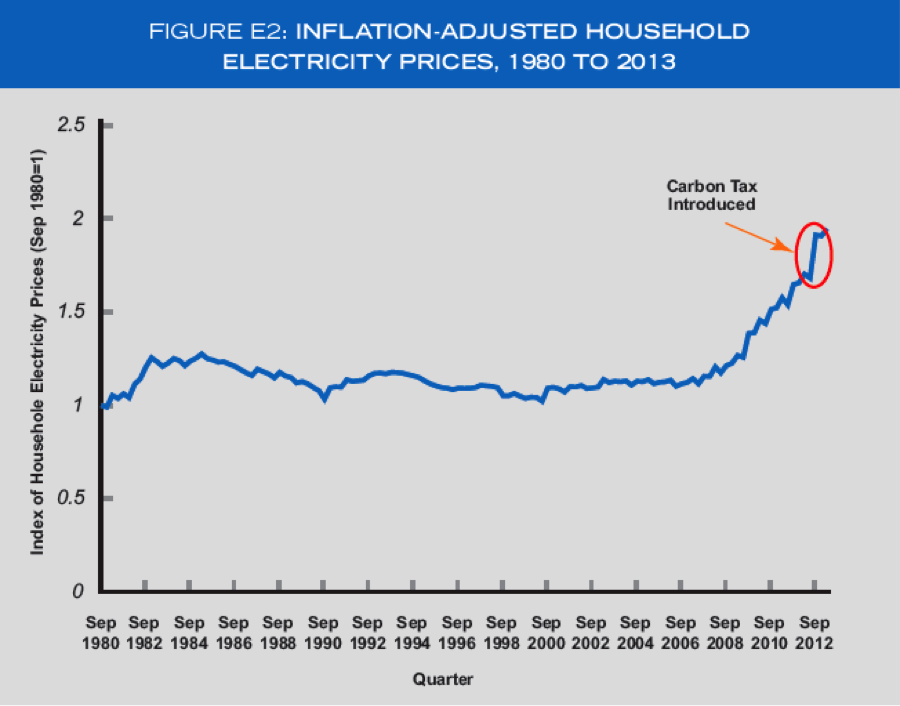 The job market had previously been stable, but after Australia’s carbon tax the number of unemployed began rising rapidly. Robson’s chart shows the gory details: 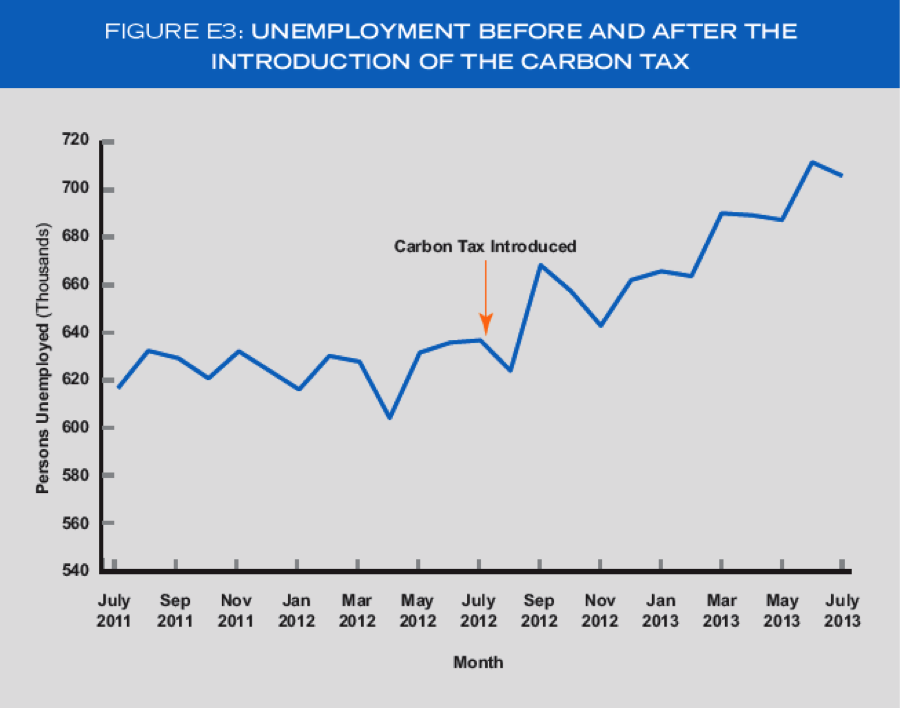 Last summer, IER published Dr. Alex Robson’s hard-hitting analysis of Australia’s actual experience with a carbon tax. This study was quite inconvenient for those in the US pushing for an American carbon tax, because none of their promises panned out in Australia. At the time, one of the lame objections to the study was that it wasn’t peer-reviewed. Well, now that a version of Robson’s study has been published in a peer-reviewed journal, that objection falls away, just like the others.

The U.S. policy debate needs to start acknowledging the dismal reality of the actual effects of a carbon tax. They’re not pretty. It’s not surprising that Australia’s September elections brought new Prime Minister Tony Abbott to power on his campaign of “axing the tax”—even though elements of the Australia government don’t like the message the voters sent.

Is the U.S. Falling Behind in the Nuclear Energy Race?