The United States is being left behind in the global quest for nuclear energy. While the United States has retired 4 nuclear reactors recently, plans to decommission several others, and is building only a few new reactors supported by DOE loan guarantees, the world is building lots of reactors, mostly with Russian technology. According to the Energy Information Administration, total world nuclear capacity is expected to double from an estimated 358 gigawatts in 2013 to 717 gigawatts in 2040. China and India each are expected to increase their nuclear generation by about a factor of 20 over the next 25 years.[i]  And, Russia has taken the lead in a $500 billion export market in nuclear technology.[ii]

According to the Energy Information Administration, the United States now has 100 nuclear reactors, down from 104 nuclear reactors in January 2013. These reactors and several others are being decommissioned because of difficulties getting license extensions from the Nuclear Regulatory Commission and from competition from low cost natural gas. For example, two units at the San Onofre Nuclear Generating Station in California are being shut down due to delays in getting approval to restart them from the Nuclear Regulatory Commission. And, in the fourth quarter of 2014, Vermont Yankee is expected to be retired because it cannot compete as a merchant plant against low cost natural gas, making the Northeast very dependent on natural gas for electricity generation. For more information on these units, click here.

Further, the Nuclear Regulatory Commission has instituted new safety measures at existing U.S. nuclear plants due to the Fukushima accident costing billions of dollars. For example, Exelon, a company that operates 17 of the 100 commercial power reactors in the United States, expects to spend $400 million to $500 million in post-Fukushima upgrades.[iii]

According to a report by the Center for Strategic and International Studies (CSIS):[iv]

“America’s nuclear energy industry is in decline. Low natural gas prices, financing hurdles, failure to find a permanent repository for high-level nuclear waste, reactions to the Fukushima accident in Japan, and other factors are hastening the day when existing U.S. reactors become uneconomic, while making it increasingly difficult to build new ones. Two generations after the United States took this wholly new and highly sophisticated technology from laboratory experiment to successful commercialization, our nation is in danger of losing an industry of unique strategic importance and unique promise for addressing the environmental and energy security demands of the future.”

Russia has transferred nuclear technology to many countries, including Hungary, Venezuela, Turkey and Iran.  According to the World Nuclear Association, Moscow is building 37 percent of the new atomic facilities currently under construction worldwide and is expected to almost double its own nuclear generation by 2020. For example, Russia is building two new nuclear reactors in Hungary and may lend as much as 10 billion Euros ($13.7 billion) to finance the project. If the deal goes through, Russia will finance 80 percent of two 1,200 megawatt units on a 30-year loan at below-market rates.[v]

Russia has found that many countries need nuclear power but do not have the funds to pay for it or the expertise to build it. By helping these countries finance the purchase of nuclear technology, Russia is opening the door to sales of its nuclear technology and providing the construction and the training of employees. 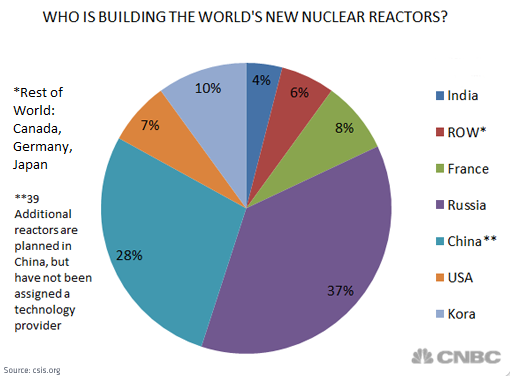 According to the U.S. Department of Commerce, the international nuclear market will grow to $740 billion over the next decade. It estimates that every $1 billion in exports supports at least 5,000 domestic manufacturing jobs. According to the Nuclear Energy Institute, there are 71 new nuclear plants under construction worldwide and an additional 160 in licensing and advanced planning stages.

The Center for Strategic and International Studies (CSIS) sees boosting the U.S. nuclear export sector “a national security imperative,” particularly given the encroachment of Russia, and also China and India. According to the CSIS, “U.S. firms are currently at a competitive disadvantage in global markets, due to restrictive and otherwise unsupportive export policies.” The United States provides nuclear expertise via a “123 Agreement” to 21 countries but lacks accords with key demand hubs in Asia and the Middle East where nuclear power is expected to increase the most and where Russia is providing technology and financing. The rules of the agreement also need updating given the current marketplace for nuclear power.

Added to this, of course, is the expertise gained by those who are actually building new nuclear reactors.  In much the same way that China is beating the United States at building new coal plants by constructing them, Russia can also be expected to excel in this technology by building on the information gained in constructing the many plants they have been pursuing worldwide.  Practice makes perfect, in most endeavors.

Russia views nuclear as an excellent export product and is using it as part of its plan to establish itself as a geopolitical economic power while the United States is left at the sidelines, in large part due to opposition to nuclear power. The U.S. nuclear sector has fallen into an advanced state of decline due to federal policies and actions taken by the Nuclear Regulatory Commission. Safety and cost concerns and competition from natural gas in generating electricity have resulted in a downturn in the U.S. nuclear industry, which most other countries are not following. Even the Japanese government has plans to return the nation to nuclear power just 3 years after the Fukushima nuclear accident.[vi]  According to the CSIS, “Without a strong commercial presence in new nuclear markets, America’s ability to influence nonproliferation policies and nuclear safety behaviors worldwide is bound to diminish.”

IER Comment on the Social Cost of Carbon, Part II