The Energy Information Administration (EIA) is reporting that over 5 gigawatts of additional coal-fired plant retirements have been announced by owners and operators of the plants since November 2013 mainly to comply with EPA’s Mercury and Air Toxics Standards (MATS). These 5.4 gigawatts of recently announced retirements are above the 40 plus gigawatts that IER reported in this blog and likely part of the 60 gigawatts that EIA expects to be retired as part of its Annual Energy Outlook 2014 forecast, which is based on existing laws and regulations. Unfortunately, these retirements are only going to cause problems for the grid in keeping electricity on during peak demand periods and to increase prices for consumers. States with a significant amount of coal-fired capacity in the Central part of the United States have lower electricity prices on average than those that generate very little electricity from coal in the Northeast and in California.

The 5,360 megawatts of announced coal-fired capacity to be retired include 21 units at 8 plants in 6 states that 5 companies are planning to shut down[i]: 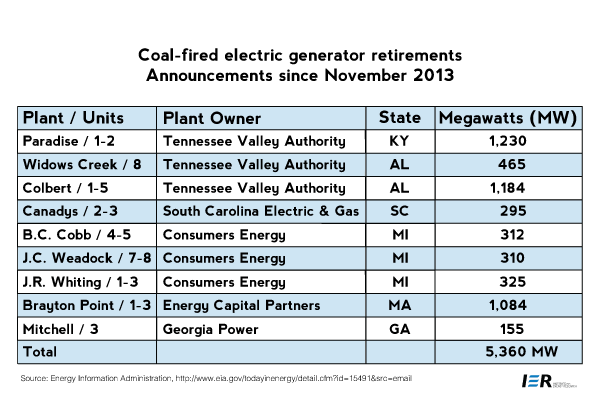 Coal Was Used Heavily during This Winter’s Frigid Weather

Masses of arctic air from the North Pole drove electricity prices this past winter to more than 10 times the previous year’s average in many parts of the country and threatened some areas with winter blackouts. To keep the lights on and houses warm, many parts of the country turned to coal during this extreme cold weather period.  Due mainly to infrastructure issues in natural gas deliverability, natural gas prices skyrocketed this past winter and coal-fired power plants were called upon since coal is less prone to price spikes and shortages.

For example, American Electric Power, which serves Columbus and a vast area of the Midwest, was running 89 percent of the coal plants that it must retire next year. At Muskingum River, three units of a five-boiler coal plant about 100 miles southeast of Columbus were operated during the cold weather period. Two of the five units need half-million-dollar repairs, which will not be undertaken since they must close before those investments can be recouped. The newest unit, commissioned in 1968, will close because it needs upgrades to comply with EPA regulations that would cost hundreds of millions of dollars.[ii]

In the Pennsylvania, New Jersey and Maryland interchange, 12,000 megawatts of coal-fired capacity is retiring. That independent system operator recently set a peak record for winter energy use of around 140,000 megawatts and its summer record is 168,000 megawatts. Although enough capacity is available and new gas-fired units are being built, the pipeline infrastructure has not been sufficient to get the gas to demand centers when most needed, and pipeline permitting has become more difficult for fossil energy projects .

In December, the Federal Energy Regulatory Commission warned Congress that there could be rolling blackouts by 2016 in the U.S. Midwest due to a projected shortfall in power reserves because of coal plant retirements.[iii] Other areas of the country are having similar concerns.

Without the coal plants, electricity prices in the peak periods of winter and summer will likely be higher, so future periods of cold weather will be harder on consumers’ electric bills. Because an unprecedented amount of coal units are retiring in a short period of time, the change is likely to be accompanied by more price volatility.

It is not only coal that is disappearing from the electric generating mix. So is nuclear energy. Last year, the Kewaunee reactor in Wisconsin was closed because it is a merchant plant and cannot produce power at a competitive rate in the Midwest electricity market. Vermont Yankee, a nuclear power station in Vernon, Vermont, is also scheduled to close because as a merchant plant its cost of production is higher than the market rate for power. In California, at the San Onofre plant, two nuclear reactors are closing because of delays at the Nuclear Regulatory Commission in renewing licenses and approving operation after a down period for maintenance.

During the polar vortex all but 3 of the nation’s 100 nuclear reactors were operating at 90 percent of their capacity.

This winter’s cold weather and the natural gas infrastructure problems have illustrated the need for diverse sources of energy supply. But, the nation’s regulators so far are not fully accounting for the need for that diversity. Or, the regulators could be working to fulfill President Obama ’s vow to make electricity prices “skyrocket.”

Coal-fired power plants are closing at an alarming rate due to EPA’s MATS rule, and the regulatory blizzard is just beginning. These units were used heavily during this past winter to supply power when infrastructure problems caused natural gas prices to skyrocket. Grid operators are warning the country that electric power may be insufficient to meet demand next winter due to these retirements and those of several nuclear reactors. Yet, the EPA is not letting up on its onerous regulations regarding coal-fired power plants with more to come this spring/summer.   A looming storm is building for electricity production in the United States, and few policy makers have been paying attention.  Consumers are not apt to be happy with rapidly accelerating electricity bills and an increased likelihood of insufficient supply.

[ii] New York Times, Coal to the Rescue, but Maybe Not Next Winter, March 10, 2014, http://www.nytimes.com/2014/03/11/business/energy-environment/coal-to-the-rescue-this-time.html?ref=energy-environment&_r=2

[iv] Advanced Energy for Life, How Coal Can Alleviate Pain at the Plug, https://www.advancedenergyforlife.com/article/how-coal-can-alleviate-pain-at-the-plug