In 2017, China was the world’s fastest-growing natural gas market. Consumption grew by 15 percent—over twice the rate of economic growth—and  liquefied natural gas (LNG) imports grew by 46 percent. In 2013, under the country’s National Action Plan on Air Pollution Prevention and Control, natural gas became a central part of the Chinese government’s plan for fighting air pollution. China’s thirteenth Five-Year Plan (2016–2020) set goals for increasing the use of natural gas, including almost doubling the share of natural gas in China’s energy mix in five years—providing up to 10 percent of China’s primary energy by 2020 and 15 percent by 2030.

In 2017, natural gas accounted for about 7 percent of China’s primary energy consumption. Over two-thirds of the natural gas consumed in China is used in industry and buildings (mainly for heating) with little used in power generation due to China’s staggering coal-fired capacity in that sector. The Chinese economy relies heavily on coal, which produces more particulate matter and other criteria pollutants than natural gas. Transitioning from coal to natural gas can reduce China’s soot and smog. China suffers from serious air pollution problems.

To implement the plan, China first required 28 cities in the Beijing-Tianjin-Hebei region to replace small coal-fired boilers with natural gas–fired units. An estimated 4 million households switched from coal to natural gas. Beginning in December 2017 through 2021, China is targeting the replacement of these residential coal boilers across northern China. These small boilers are particularly bad at producing pollution, since their combustion is very inefficient.

To increase natural gas’s share of primary energy consumption, the Chinese government has undertaken a process of gradual price liberalization. Natural gas prices for nonresidential customers were liberalized beginning in 2015. In 2017, the government announced that third parties would receive access to pipelines and LNG import terminals.

During the winter of 2017 to 2018, much of northern China experienced significant natural gas shortages. Millions of homes were temporarily left without heat. One provincial capital suspended heating in government offices, hotels, and shopping malls. Natural gas–fueled taxis and buses waited in long lines. Industrial output was scaled back to divert natural gas to emergency heating in homes and office buildings.

Contributing to the shortage were limited storage capacity, over stretched LNG infrastructure, gas pipeline shortages, colder than average temperatures, lack of market-based price signals due to the gas market being semi-regulated, and inadequate coordination among government officials.

At the end of 2017, China had 16 operational LNG receiving terminals with 71 billion cubic meters of annual import capacity along the country’s east coast. During the peak winter months of December and January, the average nationwide utilization rate was above 105 percent and utilization at some northern terminals exceeded 120 percent. Although southern terminals operated at utilization rates of around 70 percent, the pipeline infrastructure to move natural gas from southern terminals to northern demand centers was insufficient. Chinese companies dispatched trucks to deliver LNG from receiving terminals in the south to cities in the north at distances of over a thousand miles and at a cost of over $30 per million Btu during the winter peak demand—almost three times the spot LNG price during this time period.

In the second half of 2017, pipeline gas deliveries from Turkmenistan dropped substantially due to stronger-than-anticipated demand growth and cold weather in Turkmenistan, unplanned outages at a gas processing facility, and an attempt to negotiate better pricing terms. Despite China’s attempts to purchase more supply from Kazakhstan and Uzbekistan, natural gas pipeline imports from Central Asia remained largely flat during the months of peak winter gas demand.

Unconventional gas—particularly shale gas—has long-term growth potential in China, but its development has been challenging. China’s shale basins are located in mountainous, arid, remote and also highly populated regions, leading to higher costs. China’s shale is also buried deeper and is more fractured, making it difficult and expensive to extract.

According to the Energy Information Administration, China has the world’s largest shale gas resources at 1115.2 trillion cubic feet (31,579 billion cubic meters). Because of the challenges to producing it, the government subsidizes its production, currently at roughly 20 percent of well-head prices.

Helping increase efficiency, Chinese firms can now drill multiple wells at a single pad, known as “well factory” drilling and carry out extended horizontal fracturing up to 3,000 meters. Over the past 8 years, the cost of building a well was nearly halved to an average of under 50 million yuan per well ($7.8 million), and drilling speed has improved by two-thirds to 45 to 60 days. China pumped 9 billion cubic meters of shale gas in 2017—about 6 percent of the country’s total natural gas production. 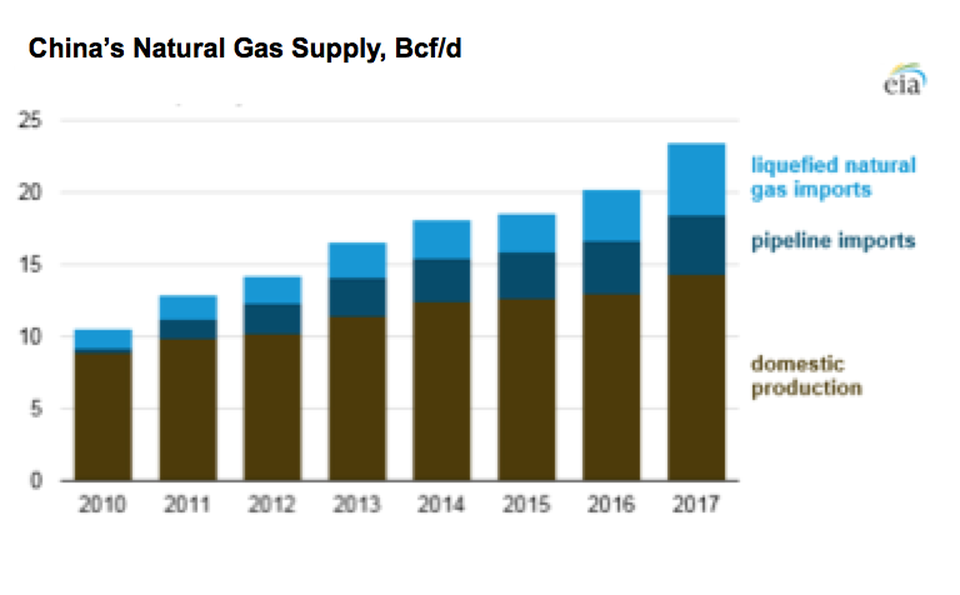 China’s other sources of unconventional natural gas production—coalbed methane and coal gasification—are less likely to materialize over the long run.

China currently imports natural gas through two pipelines: the Central Asia gas pipeline (from Turkmenistan, Kazakhstan, and Uzbekistan) and the China-Myanmar pipeline. A natural gas pipeline from Russia is currently under construction but is not likely to come on-line until the end of 2019.

In 2017, 39 billion cubic meters of natural gas was delivered by the Central Asia gas pipeline—below the 55 billion cubic meter capacity. Kazakhstan and Uzbekistan have some potential to increase pipeline gas deliveries to China, but producing more natural gas in those countries will take time. Another potential pipeline from Central Asia, known as Line D, could add another 30 billion cubic meters per year import capacity from Turkmenistan. Construction of Line D began in 2014, but the project was delayed in 2016 and suspended in 2017. If the project is completed, the earliest start of deliveries would be 2023 due to uncertainties around construction and timing, and technical difficulties due to the mountainous terrain.

The potential for increased natural gas imports through the China-Myanmar pipeline is also limited with deliveries falling short of the 5.2 billion cubic meter annual contract volume and the high cost of the gas. The Power of Siberia pipeline connecting Russia’s natural gas reserves in Eastern Siberia with China’s northeastern provinces could start deliveries by the end of 2019.  But the ramp up to full capacity—38 billion cubic meters per year of contracted volume—could take well into the mid-2020s. Also, Russia’s eastern gas fields may have a problem of providing the gas when China needs it most during the cold weather months.

Although work is underway to expand China’s natural gas storage capacity, there are geological obstacles that limit its growth. In China, depleted oil and gas fields—the most commonly used geological means of storage—are located deep underground, close to densely populated areas or in mountainous regions, which raises safety risks and technical complexity; and the technical expertise to build new facilities is limited.

If the government targets for both natural gas storage capacity and natural gas consumption are met, storage is expected to reach 6 percent of consumption in 2030, compared to just over 5 percent today.

Five new or expanded regasification terminals are scheduled to come on-line in 2018. Several additional terminals are under construction or expanding capacity, with projected online dates between 2019 and 2021. China’s LNG import capacity could increase by half through the early 2020s. Because only about a quarter of China’s new import capacity is in the northern regions, parallel development of the domestic gas pipeline network is also needed. Plans call for an expansion of China’s natural gas pipeline network by 99,000 kilometers (about 60,000 miles) between 2015 and 2025.

China is expected to become the world’s leading LNG importer over the next decade.  Government natural gas targets imply strong demand growth for at least the next decade—although infrastructure constraints could limit consumption in the short and medium terms.  China is developing its vast shale gas resources to help meet demand.

Electricity Bills in South Australia and Other Australian States Skyrocket