In April 2015, China overtook the United States as the world’s largest importer of oil, with imports of 7.4 million barrels per day—about 200,000 barrels of oil per day more than the United States imported for the month.[i] The U.S. shale oil renaissance has lowered the need for U.S. oil imports, as China took the top spot for the past month. Experts believe U.S. oil imports and Chinese oil imports will remain close, predicting the two countries will continue to exchange the ranking for the top spot over the next several months. To stimulate economic growth, China recently cut interest rates for the third time in 6 months. Once China consistently holds the top spot for oil imports, it is expected to be the top crude oil importer on a long-term basis. 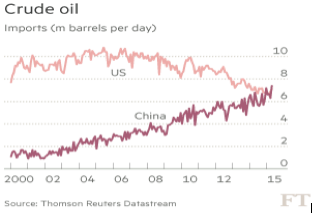 In April, China surpassed the United States in crude oil imports, but for the past several years, China has been importing more total petroleum products (both crude oil and refined products) than the United States. As China’s refining industry is growing, it is now about to overtake the United States consistently as the largest importer of crude oil.

China’s increased crude oil imports in April were partly due to higher shipments from Iran. Iran is looking to obtain more Chinese investment and may be offering additional discounts on its oil to increase ties with China’s oil companies. China Oil also bought a record number of Oman and Abu Dhabi crude cargoes in April.[ii] Much of the increased oil is believed to be purchased for China’s emergency stockpile.[iii]

According to oil traders, China no longer passively accepts the prevailing market price, but is now involved in how the market price is set for oil. The amount of oil that China buys from various oil producing countries affects its market price and is closely watched, just as U.S. oil stockpiles used to be a major factor in oil price determination. Some of China’s oil traders, such as Unipec and China Oil, have taken a more visible role in the global crude oil market. They have built up sophisticated operations and can now compete directly with established trading desks at western oil companies, banks, and commodity dealers.

U.S. oil production increased by 3.3 million barrels per day over the past decade, primarily as a result of shale oil production due to the combined use of hydraulic fracturing and directional drilling. In turn, that increased production has reduced U.S. crude oil imports by about 3 million barrels per day. U.S. net petroleum imports now account for just 27 percent of consumption, down from 65 percent in 2010. This represents a huge energy transformation that has tremendously affected world markets.

According to the Energy Information Administration, U.S. crude oil production will increase both this year and next, despite an oil drilling rig count that has been more than halved since the oil price drop that occurred last June. Drilling activity is expected to increase again as companies take advantage of lower costs for acreage leasing, drilling, and well-completion services, resulting in increased production despite the relatively low oil price. Companies are very actively pursuing technology and investments that will reduce costs and increase production. In fact, one oil rig was just returned to the Permian basin in Texas – and another to North Dakota’s Williston basin – and more are expected to be added.[iv] 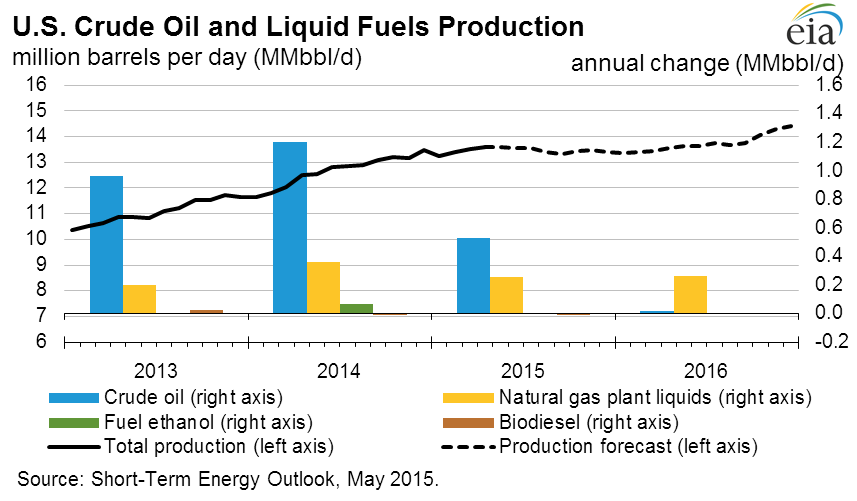 Production in the federal offshore, which is less affected by short-term price changes due to long drilling lead times, is expected to increase as new projects and the redevelopment and expansion of older producing fields come on line. Five new deep water projects began production in the last three months of 2014: Stone Energy-operated Cardamom Deep and Cardona projects, Chevron-operated Jack/St. Malo fields, Murphy Oil-operated Dalmatian, and Hess-operated Tubular Bells. The redevelopment of two mature fields–Mars (Mars B) and Na Kika (Na Kika Phase 3)–took place at the end of 2014. Cardamom Deep, Jack/St. Malo, and Tubular Bells were also slated for a late 2014 start-up. Thirteen fields are expected to start up in the next two years– eight in 2015 and five in 2016.[v]

The new offshore oil fields that came online in 2014 and are scheduled for 2015 and 2016 reflect the revival of activity in the Gulf of Mexico following the moratorium on deep water drilling after the 2010 Deepwater Horizon accident. While the moratorium officially lasted from April 30 to October 12, 2010, a “permitorium” was in effect by the Obama Administration, and few permits were approved. As a result, there were relatively few field start-ups in 2011 through 2013.

The United States is in the midst of an oil production bonanza, mainly due to shale oil production, but also as new offshore projects come on line. This production boom will continue to drop U.S. oil imports, making room for China to become the largest oil importer in the world—a ranking that it held in April 2015—and one which it will continue to hold in the long term, as its economy continues to grow at 7 percent per year.

[i] Time, China Has Become the World’s Biggest Crude Oil Importer for the First Time, http://time.com/3853451/china-crude-oil-top-importer/