According to the BP Statistical Review 2016, global coal consumption fell in 2015 by 1.8 percent—the largest decline since the mid-1960s when BP first reported data. In 2015, oil was the largest source of energy and coal was the second largest. Coal’s 29.2 percent of global energy consumption was the lowest global share since 2005.[i] In the United States, draconian regulation plus low natural gas prices made natural gas competitive with coal in electricity markets. 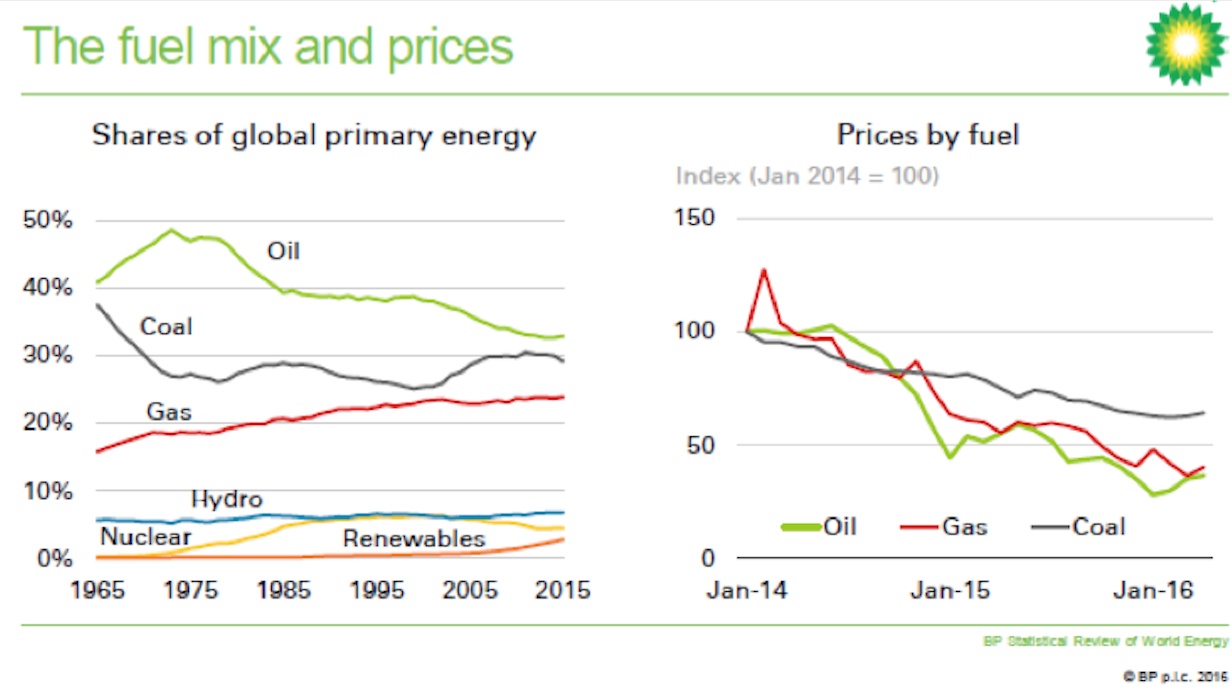 Coal is inexpensive, reliable, and abundant, and energy from coal is lifting millions out of poverty in China, India and other emerging nations. It is also more accessible than other energy sources, easier to transport and simpler to store. Eastern Europeans see their domestic supplies of coal as an alternative to Russian oil and gas.

Coal ranks second to oil among the world’s energy sources and its global reserves will last for 113 years at 2015 production levels. China consumes over 4 times the amount of coal that the United States consumes–the most of any nation in the world. China, Japan and India are the largest coal importers while Indonesia, Australia, Russia and the United States are the largest exporters of coal. 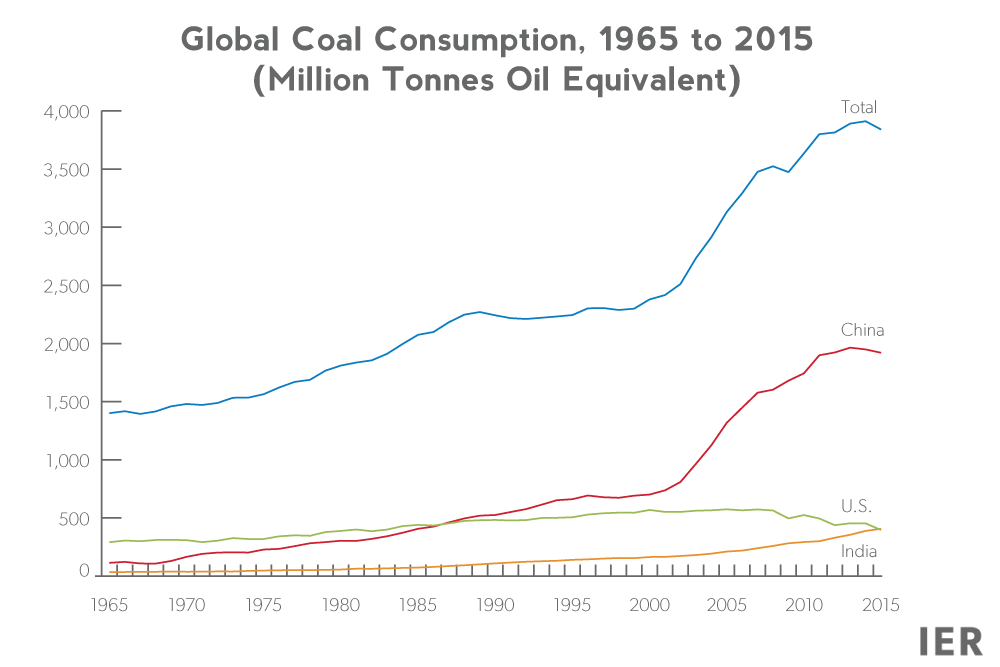 In 2015, coal consumption declined in the United States by 12.7 percent and in China by 1.5 percent as these countries retired coal-fired power plants and used natural gas, nuclear power and renewable energy in their stead. In other countries, such as India and Indonesia, coal demand increased to bring more electrification to their population. Last year, coal consumption increased 4.8 percent in India and 15 percent in Indonesia. Also, in 2015, India surpassed the United States as the world’s second largest consumer of coal.   The United States is now only the third largest coal consumer in the world, despite having – by far — the world’s largest coal resources.

In 2015, Germany’s coal consumption fell slight (by 0.6 percent) but since 2009, Germany’s coal consumption has increased by 9.2 percent.[ii] The reason is that Germany is using coal to back-up its wind and solar plants that are replacing the country’s retiring nuclear power plants. When the tsunami hit Japan’s nuclear power plants at Fukushima in 2011, Germany made a decision to replace its nuclear units with non-hydroelectric renewable energy. But because intermittent renewables need to be backed up when the wind is not blowing and the sun is not shining, Germany is turning to coal, which is less expensive than natural gas in Europe. Germany started two new coal-fired plants in 2015. 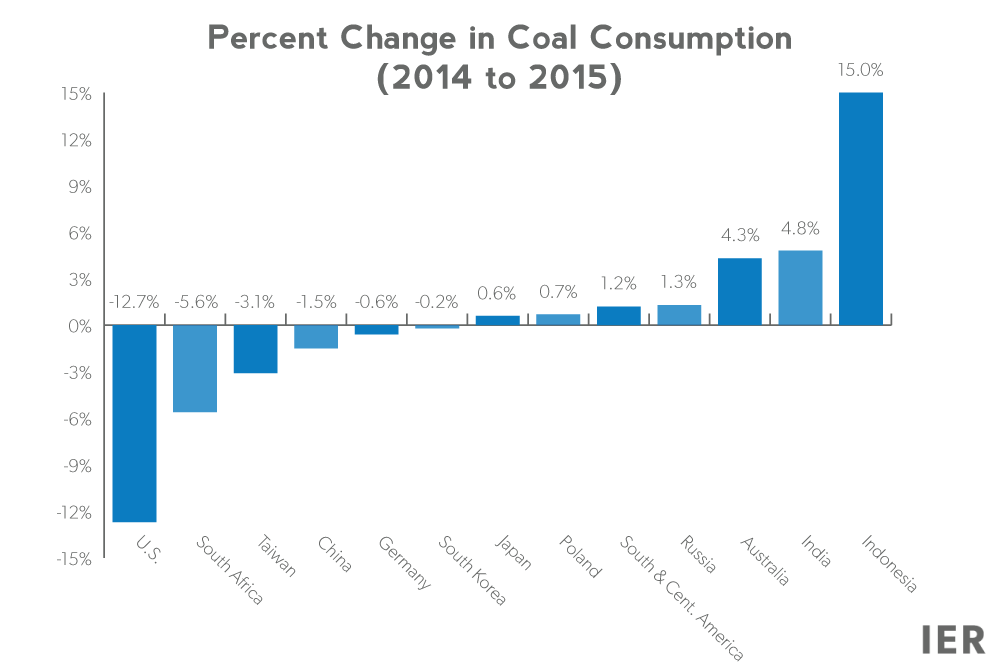 Crude oil prices began to drop in mid-2014 as increasing oil production from the United States, Russia and the Organization of Petroleum Exporting Countries resulted in a surplus that eventually pushed prices below $30 a barrel. While oil prices are around 80 percent higher today, they are still half their level of two years ago. Global petroleum inventories remain high and in the United States, these inventories are near an 80-year high.

Investment in oil and natural gas projects is estimated to have declined by about $160 billion in 2015–about a quarter less than its 2014 level–the largest proportionate decline since the late 1970s, which will detract from future supply growth.

In 2015, growth in global natural gas production was strong, but demand outside of the power sector was subdued, leading global prices to fall. For example, the Henry Hub price fell 40 percent relative to its 2014 average; the Japan Korea Marker price fell 46 percent. Natural gas consumption increased by 1.7 percent in 2015, more than in 2014 (0.5 percent) but less than its historical average of around 2 percent.

On the demand side, Asian growth slowed to 0.5 percent with China’s demand growing 4.7 percent, falling from double-digit growth seen over much of the past 10 years. In the European Union, natural gas demand grew 4.6 percent and in the Middle East, it grew by 6.2 percent.

Oil remained the largest fuel consumed in 2015, followed by coal. The United States and China both used less coal in 2015 than in 2014 due to competition from natural gas, nuclear power, and renewable fuels. Despite the regulatory headwinds, coal consumption actually increased in many countries including India, Poland, Spain, and Indonesia in 2015.

Oil and natural gas prices collapsed resulting in greater global consumption of both of these fuels, each increasing by almost 2 percent. Oil supply in 2015 exceeded consumption resulting in the continuation of the imbalance begun the previous year and high levels of global petroleum stocks.