Crude oil prices[1] have fallen about $40 per barrel, more than 35 percent, just since June. Earlier posts from the IER team covered the particular details of trends in supply and demand for crude oil in both the United States and the world as a whole. In this post, I’ll show the connection between crude oil and gasoline prices, and I’ll also relate the fall in crude to the Federal Reserve’s monetary policies.

Whenever oil prices shoot up sharply, causing gas prices at the pump to rise as well, people “in the know” talk matter-of-factly about the greedy speculators and Big Oil ripping motorists off. When the price rise is particularly steep and sustained, even Congress and regulators get involved, since nothing ensures efficiency and consumer protection like a federal investigation.

So let’s all burn the present episode into our minds, to serve as a counterweight the next time global forces of supply and demand push up crude oil prices. In particular, U.S. gasoline prices have fallen along with crude: 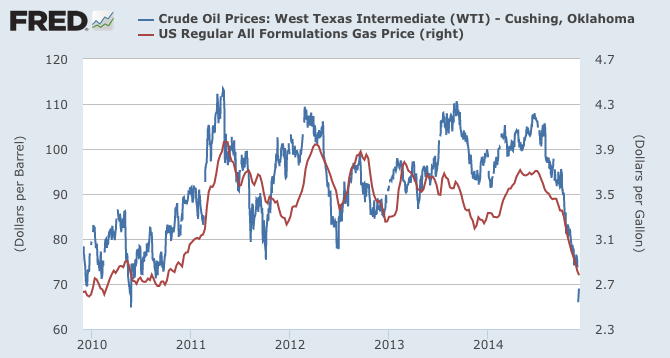 As the chart above indicates, U.S. gasoline prices (red line) have tracked the movements of crude oil (blue line) quite closely since 2010. If anything, gas prices tend not to follow crude all the way up when the blue line spikes.

Putting the Drop in Crude Prices in Perspective

Although the recent drop in crude oil prices has been significant, some analysts are treating it as if it were unprecedented. The chart below, showing weekly crude oil prices going back to 2006, reminds us that such movements are not so rare, after all: 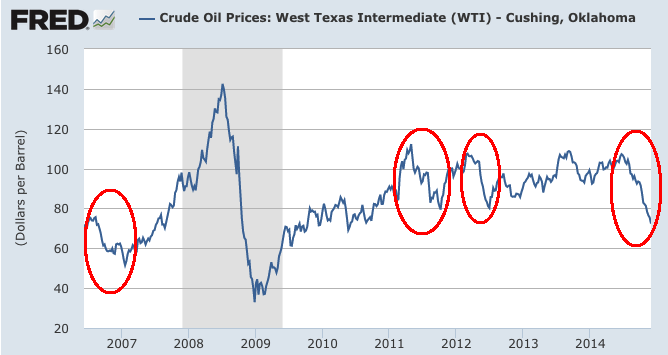 As the chart above indicates, although the recent drop is relatively large, there have been three comparable falls just since 2006. Furthermore, none of these four episodes comes anywhere close to the utter collapse of crude prices in 2008.

The Possible Role of the Federal Reserve

In May, 2011 I testified before a Congressional subcommittee on the role that the Federal Reserve’s “quantitative easing” (QE) programs may have played in pushing up oil prices (and hence gasoline prices). I explained that when the Fed effectively flooded the financial markets with trillions of new dollars, this would make the dollar weaker against other currencies and cause some investors to flee to commodities as an inflation hedge. Thus, the Fed’s loose monetary policies would have a one-two punch on oil prices quoted in U.S. dollars.

I do not think it is a coincidence that the recent plunge in crude oil prices occurred as the Fed wrapped up its “tapering” process and formally ended what the financial analysts had dubbed “QE3.” (The last official purchase of Treasuries and mortgage-backed securities occurred in October, and now the Fed is holding its balance sheet at a constant size.)

As the markets reacted to continued signs from the Fed that it was indeed ending the infusion of ever more dollars into the system, we see that the USD strengthened against other major currencies: 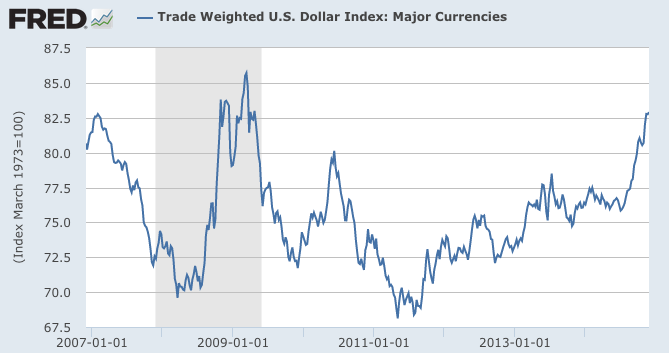 In the graph above, notice the sharp rise since the summer—the same period when crude oil prices (quoted in U.S. dollars) have been plunging.

Finally, to isolate the role that the Fed’s actions may have had on investors who were piling into commodities for inflation protection, look at what’s happened to the price of gold recently: 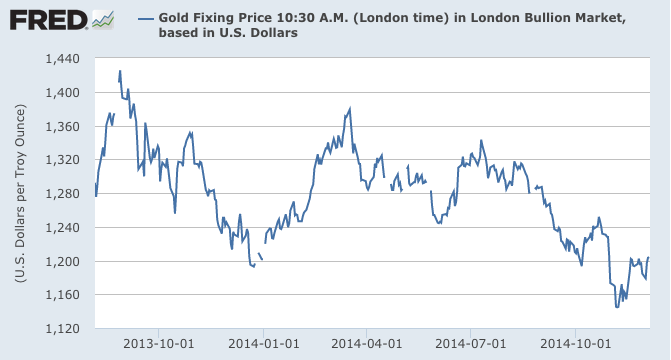 As the chart above shows, gold is down about 10 percent since June. Not as big a drop as crude oil, to be sure, but it does show that the fall in crude may be part of a larger story, and is not merely due to particular development in U.S. fracking and/or Saudi Arabian strategizing.

The price of crude oil is set in a world market, and in principle is influenced by the actions of billions of people in their production and consumption decisions. In that respect, it would be an act of hubris to glibly state “the cause” of falling oil prices.

However, one takeaway lessons from the recent plunge is that the market for oil really does respond to supply and demand; we should remember the present episode the next time people complain about greedy speculators. Furthermore, because the plunge coincides with the wrapping up of QE3, it is reasonable to conclude that the Fed’s loose monetary policies were pushing up crude oil all along.

[1] Throughout this article, I am quoting West Texas Intermediate (WTI) crude oil prices as reported at Cushing, Oklahoma.

Why is NRDC Afraid of Democracy?