Thanks to hydraulic fracturing and anti-coal regulations, low cost and abundant natural gas is displacing coal in the electric generation sector and many have argued that it should replace diesel used by heavy duty trucks in the transportation sector. The low cost of natural gas coupled with regulatory favoritism currently makes natural gas the nation’s fuel of choice. But just how far can this natural gas renaissance take the nation in replacing coal as a utility fuel and petroleum for use in heavy trucks? Let’s take a look.

Between 2008 and 2013, U.S. natural gas consumption increased by 12 percent to 26 trillion cubic feet in 2013 due to its abundance, low cost, and ease of use. More than half of the homes in the United States use natural gas as their main heating fuel. Natural gas is also used in homes to fuel stoves, water heaters, clothes dryers, and other household appliances. Natural gas is used in the industrial sector to produce steel, glass, paper, clothing, brick, and as a raw material for many common products. Some products that use natural gas as a raw material are paints, fertilizer, plastics, antifreeze, dyes, photographic film, medicines, and explosives. Natural gas has been a major fuel for electric generation for many decades, but it is increasingly being used in electric generation to replace coal and to back-up intermittent renewable technologies such as wind and solar.

The largest percentage increase in natural gas consumption occurred between 2008 and 2012, when electric utility consumption of natural gas increased by 38 percent, but natural gas lost some of that gain in 2013 when natural gas prices increased and coal regained some of the share of generation lost in 2012. Regardless, natural gas is still the fuel of choice for new electric generation plants since proposed EPA regulations are essentially banning the construction of any new coal fired generating plants and EPA admits in their proposed regulation that no new coal plants will be built in the next 10 years. 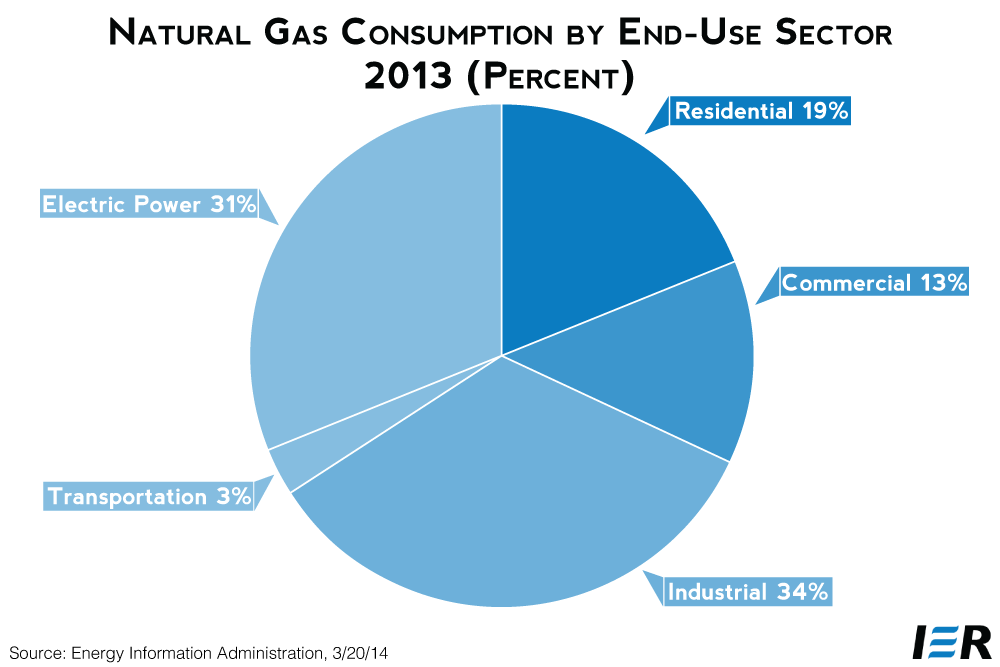 Projected Natural Gas Production and Use in 2040 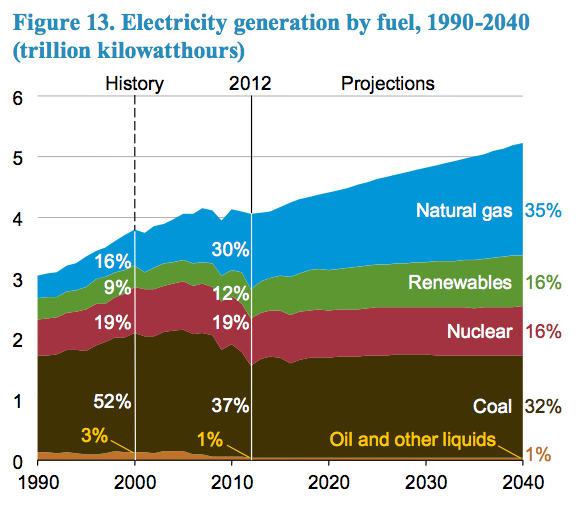 EIA is not forecasting the demise of coal-fired generation in the electric generation sector because the agency’s forecast is based on existing laws and regulations. So, although the EPA is proposing to implement a regulation during this spring or summer limiting carbon dioxide emissions from existing coal-fired power plants, that regulation was not included in EIA’s 2014 Annual Energy Outlook. But, it is possible that future EPA regulations could essentially ban coal-fired generation (especially if Congress and the courts fail to rein in EPA). Therefore, it is important to assess what the impact on energy supply flows would be in the event EPA proposes a regulation that would effectively achieve the goals of those who oppose the use of coal in the United States.  Such a regulation would lead to the retirement of all existing coal-fired power plants since technology is not commercially available to reduce carbon dioxide emissions from coal plants to the levels that EPA is demanding of new coal-fired power plants.  Let’s look at how much more natural gas the nation would need if it were to replace all the coal-fired power plants in the United States with natural gas.

In 2013, coal-fired plants generated 1,585,998 million kilowatt hours of electricity, according to EIA. Assuming that natural gas combined cycle plants would replace all of that generation, the nation would need 10.8 trillion cubic feet of natural gas beyond that already used to generate electricity in this country, assuming a heat rate for combined cycle of 7,000 Btus per kilowatt hour.   That would increase natural gas consumption from 26.0 trillion cubic feet in 2013 to 36.8 trillion cubic feet if this feat could happen overnight. Since that is not likely, let’s assume this transition will take place over the next 25 years and see how the demand for natural gas would change in EIA’s forecast if the coal-fired generation in 2040 was replaced by natural gas.

Besides becoming a net importer of natural gas, the United States would need to add significant additional pipeline infrastructure to ensure the gas reaches the many new natural gas fired power plants that would be dotting the landscape. As it is, the pipeline infrastructure was insufficient in the Northeast to get the natural gas to demand centers when cold weather hit during this past winter, and in California and even Texas, consumers were warned to reduce power consumption because of natural gas supply problems. The amount of additional infrastructure that would be needed to replace the coal-fired plants would far exceed this winter’s shortage in pipeline capacity. Further, the construction of those new natural gas fired power plants would cost billions of dollars and raise the price of electricity to consumers who would need to pay for the replacement of the coal-fired power plants targeted by EPA regulation. At an overnight capital cost of about $1,000 per kilowatt, it would cost about $260 billion to replace the coal-fired units in EIA’s forecast in 2040 with natural gas-fired units. Because overnight capital costs exclude finance charges, the actual costs would be much higher.

Of course, wind and solar power would replace some of the lost coal-fired generation. Wind and solar power combined currently generates just 4.4 percent of the nation’s electricity despite adding wind power adding 30 percent of all new electric capacity additions over the past 5 years. Because  wind and solar plants supply intermittent power, they would need to be backed up with reliable natural gas-fired generation. Further, the capacity factors of new combined cycle plants fueled with natural gas are more than 2.5 times that of new wind plants and 3.5 times that of new solar photovoltaic plants providing much more electricity for an equivalent amount of capacity.  Intermittent supplies of electricity carry with them the hidden costs of requiring additional capacity to be bought and maintained to operate when the sun or wind resource are not available.

Companies in the United States are allowed to freely export natural gas to Canada, Mexico and other countries with which the United States has a free-trade agreement. However, to export to any other country, companies must obtain approval from the Department of Energy, who must determine that those sales are in the public interest before approval can be granted. The Energy Department has so far approved only six applications out of more than two dozen.[ii] Those six export terminals have a combined export capacity of 8.7 billion cubic feet a day for a total of 3.2 trillion cubic feet a year. Once approval is obtained from the Department of Energy, the export terminal must get a permit from the Federal Energy Regulatory Commission (FERC) before construction can begin. So far, only one company, Cheniere, has been granted a combined operating license from FERC and expects to be operating at the end of next year. There is another 26.88 billion cubic feet per day (9.8 trillion cubic feet per year) of natural gas in the queue at the Department of Energy for approval. Thus, the total amount of capacity from export terminals to non free trade agreement countries is 13 trillion cubic feet, just 3.4 trillion cubic feet less than the amount of natural gas that is needed to replace the coal-fired capacity and the heavy truck fleet in the United States by 2040.

It is unlikely that all of these LNG export projects will come to fruition for the technology is expensive and to be competitive on the world market, domestic natural gas prices need to remain low.  Costs for building liquefaction plants (gas has to be super cooled so that it can be loaded onto large ships) are high around the globe. Project costs for building gas export infrastructure in Australia, for example, have increased between 20 and 40 percent. In Australia, seven projects are under construction at a total cost of about $150 billion. When Chevron’s Gorgon LNG project in Australia is completed, the total cost is expected to be about $52 billion. In Papua New Guinea, Exxon Mobil is building a $20 billion LNG export terminal.[iii]

Companies in the LNG export business need to recoup the large up-front costs of constructing liquefaction and export facilities. The first ones built should have an easier time recovering those costs as prices for LNG in Asia are high and domestic natural gas prices are low. But others could face issues given the domestic price of natural gas, the sustainability of current global pricing structures, and competition from other sources of supply.[iv]

Domestic natural gas prices are not expected to remain at the $3 to $4 dollar range forever. The Energy Information Administration is predicting that natural gas prices at the Henry Hub will increase from $2.75 in 2012 to $7.65 per million Btu in 2040 in real terms, a growth rate of 3.7 percent per year.

The United States has a tremendous resource base of natural gas. According to EIA, our reserves at the end of 2011 totaled 334 trillion cubic feet, almost a doubling in 10 years despite our continued use of the resource. These reserves come from our technically recoverable resource base of natural gas, which the Institute for Energy Research estimated to be 2.744 quadrillion cubic feet. While the resource base is extremely large, its recoverability is dependent on technology and price. Therefore, energy policy makers need to be clear on the competing uses of natural gas and decide what is best for the nation and its energy policy goals.

Natural gas is a versatile energy resource and since it is the fossil fuel with the lowest emissions of carbon dioxide, it is in demand in all sectors of the economy. It has lowered carbon dioxide emissions in the electric generating sector, resulted in the resurgence of the industrial sector in the United States, and remains the major fuel in the residential sector heating homes and providing energy to other appliances in many households. It is being eyed to replace coal in the electric generation sector, to be used to fuel the heavy truck fleet, and to be exported to nations that need more favorably priced natural gas or are dependent on Russian natural gas. Those uses could create a large demand for the fuel that will require huge up front capital costs, large infrastructure changes, and the need to produce much, much more natural gas in the future than our forecasters are predicting.

Moreover, significant voices in the anti-fossil energy political movement are pressuring the U.S. government to take steps to curtail the production of more natural gas in the United States on many fronts.  These include making it harder to produce, transport and consume, and among their targets are hydraulic fracturing, methane, and the carbon emissions from natural gas. All of these matters need to be seriously considered when policy makers are deciding what role they want natural gas to play in the future.

[1] Because compression ignition natural gas engines require about 5 percent use of diesel fuel to ignite the natural gas, only 95 percent of the fuel is assumed to be replaced.

what if we used only natural gas

Ukraine: An Important Transit Country for Natural Gas and Petroleum