During the current heat wave on the Eastern Coast, New York power prices rose by over a factor of 20 to more than $1,000 per megawatt hour as hydropower imports from Quebec dropped by 80 percent. This was despite having all of the state’s back-up oil capacity on line.[i] New York, which sits atop of the Marcellus shale formation, could be producing its own natural gas, but it has banned hydraulic fracking[ii], and despite its nearness to Pennsylvania, which is the second largest natural gas producer in the country, New York is limiting its construction of natural gas pipelines, which could bring Marcellus shale gas from Pennsylvania. As a result, electricity prices skyrocket in the state when shortages occur. 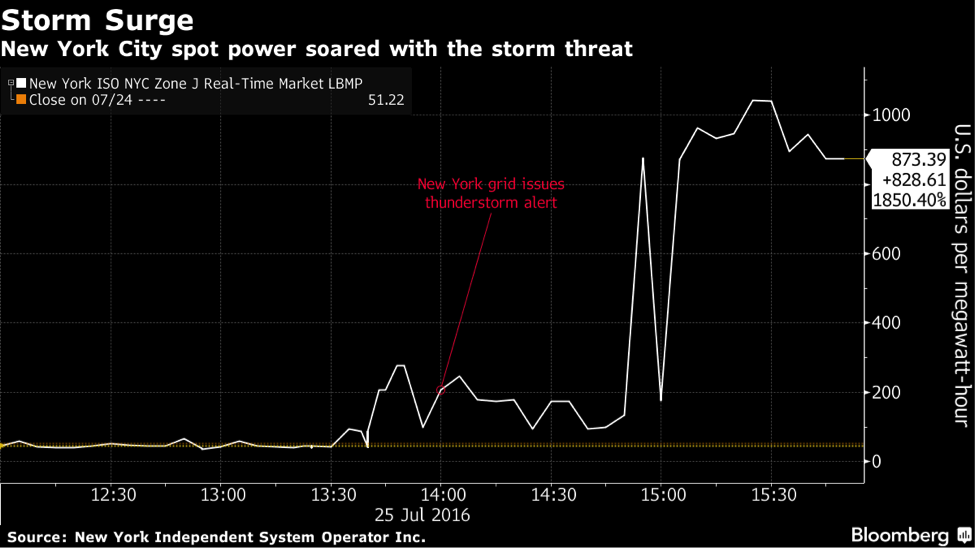 The Constitution Pipeline, designed to carry natural gas from Pennsylvania to New York, has been blocked by New York State officials despite receiving its federal permit. The pipeline would transport 650,000 dekatherms of natural gas per day, which is enough natural gas to serve around 3 million homes. The 124 mile pipeline would extend from Susquehanna County, Pennsylvania, to the Iroquois Gas Transmission and Tennessee Gas Pipeline systems in Schoharie County, New York.[iii]

Originally, the Constitution pipeline was expected to be in service by late 2015, but construction was held up during the regulatory approval process. The Federal Energy Regulatory Commission—the federal agency that oversees the interstate transmission of natural gas, oil and electricity–approved the pipeline in December 2014 and reaffirmed that decision earlier this year.

New York regulators including Governor Cuomo, however, rejected the project, alleging it does not comply with the state’s water quality standards because it would cross ecologically sensitive areas, old-growth forests and 250 streams[iv], and because trees would need to be cut down that are in the pipeline’s proposed path and because almost 100 miles of pipe would be outside of existing rights of way.[v]

Construction of the Constitution pipeline would provide over 1,300 local construction jobs and support about 1,000 indirect jobs, creating around $130 million of new local payroll and $17 million in new sales and income tax revenue. The project is expected to spend about $683 million during the initial three year planning and building process.

Another pipeline, the Algonquin pipeline, received approval from the Federal Energy Regulatory Commission to be expanded from a 26 inch pipe to a 42 inch pipe—almost doubling its current size—on March 3, 2015. Governor Cuomo tried to stop the Algonquin expansion using the excuse that some of the drilling for the pipeline would occur a half mile from a nuclear power plant–a plant that Governor Cuomo wants to shut down, exasperating the state’s already tight generating market. Now, New York Senators Charles Schumer and Kirsten Gillibrand want the Federal Energy Regulatory Commission to halt the Algonquin pipeline until independent health and safety studies are completed. The pipeline, if built, would bring natural gas from Pennsylvania’s Marcellus Shale region to the Northeast, running under the Hudson River and through Rockland, Westchester and Putnam counties.[vi]

On July 25, spot electricity prices in New York rose to $1,042.37 per megawatt hour at 3:25 p.m.; they were less than $50 per megawatt an hour earlier in the day. The New York’s power system operator issued an alert that cut the amount of electricity allowed to be carried across transmission lines feeding New York City because it was concerned about lightning hitting the lines between Albany and the city and knocking out import lines.

The grid operator’s thunderstorm alert came after electricity imports from Canada plummeted. Power flows on Hydro-Quebec’s Chateauguay high-voltage transmission line that feeds New York dropped to 300 megawatts at 2:10 p.m. from 1,500 megawatts at 1:35 p.m. At about 4 p.m., the storm hit with sheets of rain, hail and thunder.

Political decisions are causing electricity prices to spike in the Northeast due to limiting pipeline construction that can bring reliable natural gas power to the region and/or, in the case of New York, banning hydraulic fracturing so that natural gas cannot be produced from the shale resources within the state. It is prudent on consumers to recognize that limiting reliable forms of energy will cause prices to skyrocket when shortages occur. This situation will only be exasperated by New York’s “50 by 30” Clean Energy standard, which requires 50 percent renewables by 2030.[vii] Mandating wind and solar energy that are at the mercy of the wind and sun will likely cause further price spikes unless adequate back-up power is built into the electricity system. Reliable power, however, cannot be provided unless there is access to natural gas, coal, or nuclear energy.

Do You Suffer From Range Anxiety?