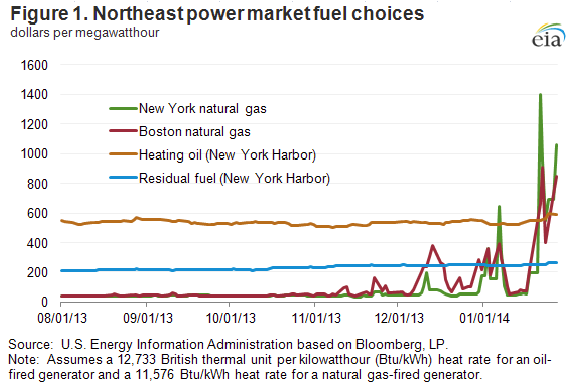 When there is insufficient infrastructure to provide adequate supplies of natural gas, prices can skyrocket, as they clearly did for utilities in the chart above. According to the Christian Science Monitor, natural gas prices in New York briefly reached $90 per million Btu[i], the energy equivalent of oil costing over $500 per barrel.  With actual costs for oil products much less than that, oil became much cheaper than natural gas. The result was that those utilities who could switch from natural gas to oil, did switch.

Around 30 percent of the electric generating capacity in New York and New England is able to switch between natural gas and petroleum and 9 percent of capacity (7 gigawatts) is just petroleum-fired. According to the Independent System Operator New England, on January 23 to 25, 24 percent of its power was generated from oil. Because of the risk of natural gas service curtailment when demand is high, utilities with the ability to generate power using petroleum ensure that they have adequate supplies available. Regulators can curtail the use of natural gas by customers with the capability to switch fuels or otherwise cut their consumption, including power companies, industrial customers, and certain commercial and residential buildings. Possible curtailment and much higher prices for natural gas generation meant utilities switched to oil if they could. 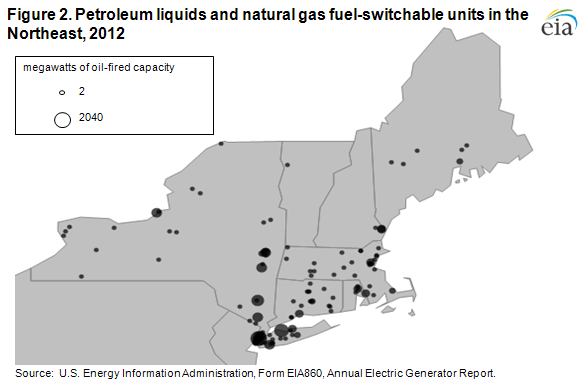 Deliverability problems last winter in New England made the Independent System Operator New England institute a temporary reliability program for this winter that included: 1) incentives to ensure that owners and/or operators of oil-fired generators increase their fuel inventories; 2) payments to dual-fueled units for testing their capacity to use oil; 3) changes to the market-monitoring procedures aimed at increasing the flexibility of dual-fueled units; and 4) a demand-response program that reduces the amount of electricity needed during peak hours.[ii] As a result, electric generators in the Northeast increased their petroleum inventories by 2 million barrels, mostly in residual fuel oil used by large steam generators. 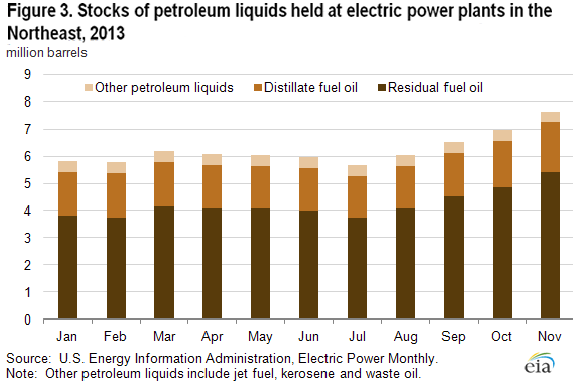 The Problem is Likely to Increase

Second, the natural gas drilling boom in shale fields led to a plunge in natural gas prices that caused an increase in natural gas-fired generation and a shift from the remaining coal and heating oil to natural gas in the Northeast. Natural gas generated less than 30 percent of New England’s electricity in 2001, but provides more than 50 percent today. While petroleum helped to alleviate some of the price spikes recently due to prudently having sufficient stocks available and the ability to dual-switch between natural gas and petroleum, the lessening of fuel diversity in Northeast energy markets should be a cause of concern for consumers, regulators, and electric grid system operators.

The expected premature retirement of a number of coal-fired and nuclear power plants will cause an even larger strain on energy markets in the Northeast. The Brayton Point power plant in southeastern Massachusetts, the largest coal-fired plant in New England[iii] with 1,055 megawatts of coal-fired capacity is scheduled to be shut down in 2017. Dominion Energy Resources is planning to retire the nearly 750-megawatt Salem Harbor coal- and petroleum-fired power plant in Massachusetts in 2014 due to the costs of compliance with new environmental regulations and declining profits for coal-fired units.[iv] To keep operating its coal-fired power plants, the company would need to spend enormous sums on new environmental equipment to comply with changing EPA regulations. The Institute for Energy Research found that over 1,100 megawatts of capacity in the Northeast are expected to be prematurely retired due to EPA’s Mercury and Air Toxics Rule (colloquially called Utility MACT) and the Cross State Air Pollution Rule (CSAPR).[v]

Not only are coal-fired power plants retiring prematurely, but nuclear plants as well. Entergy is expected to retire its 620-megawatt Vermont Yankee plant in the fourth quarter of 2014, when the plant’s current fuel cycle ends. This 41-year-old nuclear plant had been generating about 4 percent of New England’s electricity supply and about three-quarters of Vermont’s power. Entergy cited a number of financial factors for the retirement including increased costs to comply with new federal and regional regulations. Because Vermont Yankee is operated as a merchant generator, its costs cannot be recovered through regulated cost-of-service rates.[vi]

Electric grid operators in New England are warning that the premature retirement of the region’s power plants is reducing power supplies and driving up prices. In its 2017-18 “capacity market” auctions that are designed to encourage the retention and construction of new power-generating facilities and ensure a reliable grid in the future, the Independent System Operator New England indicated that it secured a commitment of 33,700 megawatts, less than the 33,855 megawatts required.[vii]

Absent infrastructure changes that significantly increase the capacity of natural gas suppliers to meet peak winter loads in the Northeast and as long as petroleum-fired capacity is available, petroleum will remain a viable alternative fuel during future periods of extreme cold weather. However, with onerous regulations on coal-fired power plants emanating from the Environmental Protection Agency and new regulations from the Nuclear Regulatory Commission following the 2011 Fukushima Daiichi accident in Japan, premature retirement of coal-fired and nuclear plants is likely to exacerbate the fuel diversity problems in the Northeast.  New England already generates over 50 percent of its electricity from natural gas and that percentage is bound to grow as coal-fired and nuclear units are prematurely retired.

An Economic Analysis of Keystone XL