President Obama released his $4 trillion budget for fiscal year 2017 today and it contains a new $10 a barrel tax on oil consumed in the United States. This tax excludes oil exports and would be phased in over 5 years. The President claims this tax is to pay for “green” infrastructure programs. According to many in the U.S. Congress, it will be dead on arrival.

The White House website touts that the tax will be paid by oil companies, hiding from the public that the tax will be paid by consumers for the petroleum products we consume. For gasoline, it will mean almost an extra $0.24 a gallon. Heating oil, diesel, and other petroleum products will also increase to pay for the new tax, if approved by Congress. Clearly, this is a back door way of increasing the gasoline tax.

The federal gasoline tax was last increased in 1993 and currently totals 18.4 cents per gallon. Adding in President Obama’s proposal would make it 42.2 cents a gallon—129 percent increase. (See chart below.) Adding in average state and local taxes has the American public paying on average 72.8 cents a gallon in taxes if President Obama’s oil tax were to go into effect, compared to an average of 48 cents today—a 52 percent increase. Pennsylvania has the highest state and local gasoline tax in the nation at 50.4 cents per gallon; Alaska has the lowest at just 12.3 cents.[i] 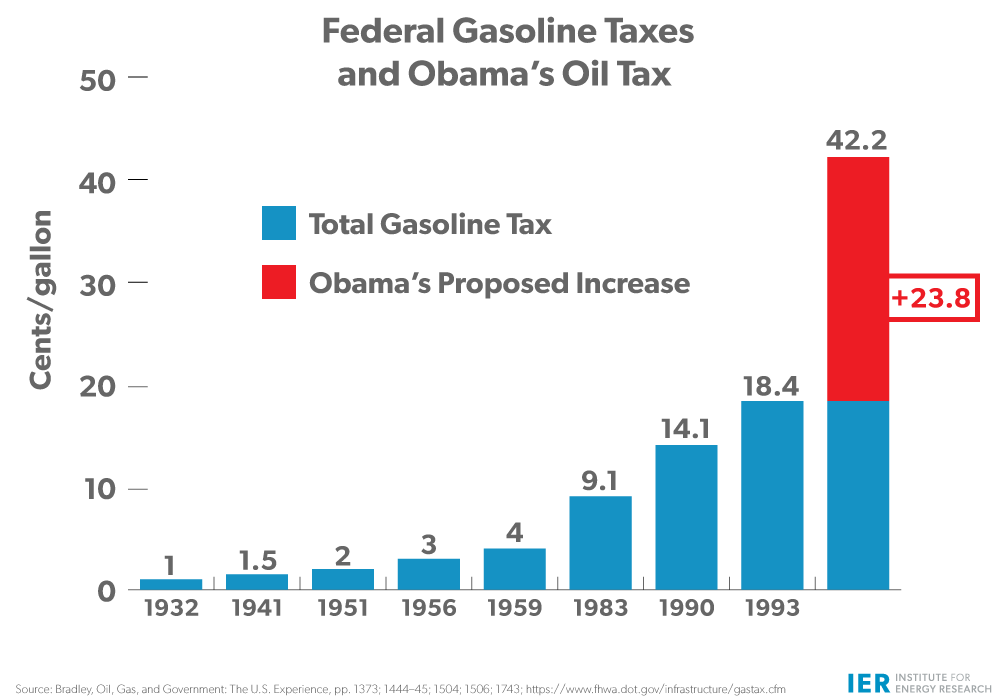 For President Obama, this is optimal timing for a tax on oil, as oil is selling for around $30 a barrel—a price not seen for over a decade. The President feels that increasing the average price for gasoline from today’s price of $1.73 per gallon[ii] to just under $2.00 a gallon will not be very noticeable. Unfortunately, a tax on oil will hurt poor Americans, who pay about 20 percent of their income for fuel. The White House plan claims to provide relief for low-income families and Northeastern households that transition away from heating oil.

With this tax on oil, the president is proposing over $300 billion in “green infrastructure” spending over the next decade in mass transit, high-speed rail, self-driving cars, and other transportation projects. A White House memorandum on the plan indicated that the $10-a-barrel tax would not only pay for his transportation wish list, but would increase petroleum prices, creating “a clear incentive for private-sector innovation to reduce our reliance on oil and invest in clean-energy technologies that will power our future.”[iii]

First of all, neither President Obama nor the Institute for Energy Research knows what technology will power our future. Spending hundreds of billions on what the President thinks the future is just another way for the president to give money to those special interest groups and businesses he likes, rather than letting U.S. citizens decide which businesses make the best products. Instead of locking us into a certain technology based on politics, people should be free to figure out what works for them. After all, people did not predict the oil and natural gas boom from hydraulic fracturing and other smart drilling technologies. Furthermore, the Obama White House suggested that Newt Gingrich “didn’t know what he was talking about” when Gingrich claimed he would work to get gasoline prices down to $2.50 by encouraging U.S. domestic production. Today, the average price of gasoline is $1.73.

About $20 billion a year—roughly equivalent to the EPA and Interior Department budgets combined—is planned to go to “enhanced transportation options,” especially alternatives to driving and flying. That would include subways, buses, light rail, freight rail modernization projects, and a major expansion of the high-speed rail initiative that Obama launched in his 2009 stimulus bill. It would also include a 150 percent increase for a stimulus program known as Transportation Investment Generating Economic Recovery program (TIGER), which provides competitive grants for multi-modal transportation projects. TIGER was part of the stimulus package launched in 2009 that turned into a massive boondoggle. Money that was allocated was never spent, and virtually no permanent jobs were created — but thousands were destroyed.[iv]

About $10 billion a year would be spent to encourage local, regional and state governments to plan and build smarter infrastructure projects, including incentives to reduce carbon emissions through land-use planning, public transit, electric-vehicle charging, and other strategies. A Climate Smart Fund would reward states that make greener choices with existing federal dollars, as well as competitive grant programs to promote region-wide planning, more livable cities, and infrastructure projects with greater resilience to climate impacts.

This spending is already behind the times. Billions have been spent on mass transit and in many places ridership is declining. For example, the LA Times recently reported that “The Los Angeles County Metropolitan Transportation Authority, the region’s largest carrier, lost more than 10% of its boardings from 2006 to 2015 . . . despite a $9-billion investment in new light rail and subway lines.” This phenomenon is affecting Chicago and Washington, D.C., as well. Public transportation use in many U.S. cities, including Chicago and Washington, D.C., has slumped in the last few years. But the question takes on new significance in Los Angeles County, where politicians and transportation officials are considering whether to seek another half-cent sales tax increase in November that could raise $120 billion for major transportation projects, including several new rail lines.[v]

“It’s a bit perverse,” said USC engineering professor James E. Moore II, who has been a critic of rail transit. “You’re spending all this money and you’re driving ridership down. If you’re investing heavily in transit, you’d hope ridership would increase.”

High speed rail continues not to go anywhere. California’s high speed rail is now supposed to cost $68 billion,[vi] up from an estimate of $42 billion in 2010, with only 63 percent of land parcels required for the first 29 miles, and the project is headed back to court.[vii]

Over $2 billion annually would be spent on investments in clean transportation research and development, including efforts to deploy self-driving cars, charging stations for electric vehicles, greener airplanes, and other climate-friendly technologies.

Self-driving cars may be a good idea. It is such a good idea with such promise that Google, Apple, Uber, Volvo, and numerous other companies are working on the technology. The only reason the White House appears to want to be involved is apparently to give special favors to politically aligned companies and businesspeople. After all, billions and billions are already being spent on autonomous vehicles without these subsidies. There is no reason for the federal government to further give these companies more taxpayer dollars. Moreover, without government funding, there is less likelihood that current government officials will improperly steer funding to companies they might wish to seek employment with after the Obama Administration leaves office.

Congress, however, is unlikely to pass the President’s proposed tax and spending plan–especially after passing a highway bill last year. “Once again, the president expects hardworking consumers to pay for his out of touch climate agenda,” House Speaker Paul Ryan said in a statement. He said it was “little more than an election-year distraction” and that it would be “dead on arrival in Congress.”[viii]

Just five years ago the president was saying that oil prices should be lower instead of working to increase oil prices. At the time, the President still needed to win reelection, and his rhetoric was completely at odds with his rhetoric today. The president told Georgetown University students in a 2011 speech that “rising prices at the pump affect everybody–workers, farmers, truck drivers, restaurant owners, students who are lucky enough to have a car.”

Five years later, President Obama is proposing a tax that is currently 30 percent of the price of each U.S. barrel of oil. He knows exactly what this means for gasoline prices, but no longer needs middle income and lower income voters. Obama said in 2011, “And every time the price of a barrel of oil on the world market rises by $10, a gallon of gas goes up by about 25 cents. Businesses see rising prices at the pump hurt their bottom line. Families feel the pinch when they fill up their tank. And for Americans that are already struggling to get by, a hike in gas prices really makes their lives that much harder. It hurts.” [ix] So why in 2016 is Obama himself causing this hurt?

President Obama’s tax on oil to pay for green transportation programs is essentially a second stimulus program to be funded through consumers of petroleum products. Despite the White House’s assurances that the tax is on Big Oil, in reality, taxes on companies are just paid by their customers through higher prices. Paying more taxes just makes us all poorer. U.S. consumers should recall the disastrous effects of the Obama Administration’s first stimulus program to realize that this proposal is making us poorer for no real gain. This tax is just one more thing that President Obama is trying to do to stop our energy renaissance created by new technologies and U.S. innovation.