After oil prices reached new highs in 2008, the Bush administration and Congress moved to open almost all of the outer continental shelf to oil and gas exploration and development. But in November 2011, the Obama administration released an offshore drilling plan that closes much of the offshore United States to oil and gas drilling that had been opened by President Bush and Congress. The Obama administration’s plan closes those offshore areas to energy exploration and production through at least 2017. The plan allows lease sales to occur in the portions of the Gulf of Mexico and Alaska that were already open to leasing, leaving the entire Atlantic and Pacific coasts off-limits.[i]

But, not only does the plan revert backward in time to limit offshore areas for lease, it also calls for a decrease in the number of offshore lease sales.  In the past, lease plans for outer continental shelf development averaged five lease sales a year. The 2012 to2017 plan cuts those lease sale offerings in half.[ii] And, it contains higher minimum bids and shorter lease periods. Bonus bids are likely to go up by a factor of two for some deepwater tracts and lease terms are reduced to 5 or 7 years. Because developing offshore leases takes a long time, additional costs can make marginal properties subeconomic.[iii]

In 1953, the federal government enacted the Outer Continental Shelf Lands Act to enable the Interior Secretary to administer mineral exploration and development off our nation’s coastline. The Act empowers the Interior Secretary to provide oil and gas leases to the highest qualified bidder and establishes guidelines for implementing an oil and gas exploration and development program in the outer continental shelf. According to the Bureau of Ocean Energy Management, “a 5-year program consists of a schedule of oil and gas lease sales (auctions) indicating the size, timing, and location of proposed leasing activity the Secretary determines will best meet national energy needs for the 5-year period following its approval.”[iv]

Beginning in 1981 and until they removed it on October 1, 2008, Congress annually passed a moratorium on oil and gas drilling in new areas offshore, which was made into an Executive Moratorium by President George H.W. Bush in 1990. In July 2008, spurred by high oil and gasoline prices, President George W. Bush lifted the ban and announced the beginning of a new “five-year plan” to provide a blueprint for leasing in the outer continental shelf for the 2010 to 2015 period, replacing the five-year plan for the 2007 to 2012 period, which did not provide for any lease sales in the areas covered by the moratorium. In January 2009, before leaving office, President George W. Bush issued a draft proposed oil and gas leasing plan for the outer continental shelf that included 4 areas off Alaska, 2 areas off the Pacific coast, and 3 areas off the Atlantic coast.[v]

In February 2009, shortly after taking office, President Obama’s Department of Interior announced that it was delaying the Bush plan for 6 months. Secretary Salazar began a public tour soliciting opinion which had already been done when President Bush announced the plan. In November 2009 and again in March 2010, Secretary Salazar announced that a new lease plan for the outer continental shelf would not occur until 2012. If not for the delay imposed by the Obama Administration, new areas in the continental shelf would have been opened for drilling in July 2010.

On November 8, 2011, the Obama Administration announced its new lease plan for 2012 to 2017 that closes the majority of the outer continental shelf to new energy production only allowing lease sales in areas that were already open to drilling. It includes lease sales in the Western Gulf of Mexico, and leaves out the entire Atlantic and Pacific coasts. It increases the minimum bid and shortens lease periods. And it cuts the number of lease offerings in half compared to the average of past lease sales. 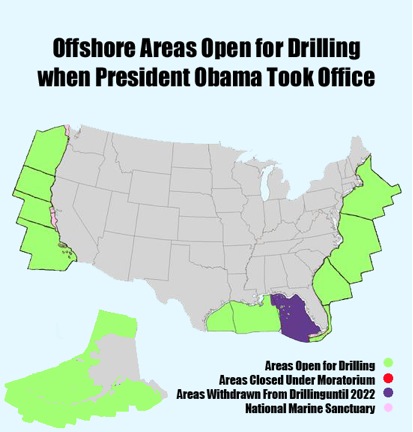 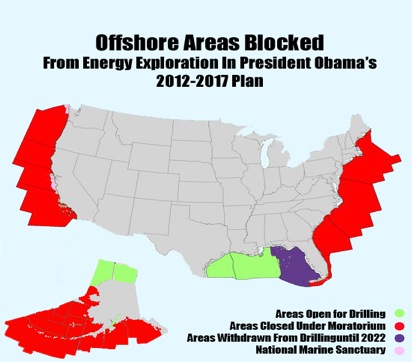 Delays and Other Offshore Leasing Issues

Virginia was poised to become the first state on the East Coast permitted to produce oil and natural gas offshore based on the 2010 to 2015 lease plan that President Bush put in place before leaving office. This plan to drill off Virginia’s coast was supported by Virginia’s Republican Governor and Virginia’s Democratic Senators. The proposed Virginia lease area is estimated to hold 130 million barrels of oil and 1.14 trillion cubic feet of natural gas.[vi] However, in January 2010, the Department of Interior announced that it was delaying the Virginia offshore lease sale that was scheduled for November 2011. Virginia then thought it would be included in the 2012 to 2017 plan, but that also did not happen when the Obama Administration removed the Pacific and Atlantic coasts from that plan. Instead, the Obama Administration announced federal approval of leasing plans for wind-power development off the coast of Virginia. Unfortunately, wind power does not help lower gas prices for the American public, nor does it help in limiting oil imports from overseas.

Other delays and cost increases are also prevalent in the Administration’s actions regarding oil and gas development. For example, Shell has been forced to spend $4 billion over five years on plan – development costs and other expenses dealing with repeated permitting delays to drill in the Beaufort and Chukchi Seas off Alaska. The increased costs were due to challenges and legal actions by environmental groups to invalidate the proposed permits that the Obama Administration did little to oppose.[vii]

Due to President Obama’s “all-the-above” energy policy, many thought that the lease plan would contain the areas that were opened to new drilling in 2008. But the Administration’s new plan for 2012 to 2017 goes backwards in time to leasing only those areas that were already open before the 2008 gas price spikes, thereby prohibiting new off shore drilling off the Atlantic and Pacific coasts.

The plan is bad for the nation’s long-term energy needs. Earlier this year, the Administration announced its commitment to reduce oil imports by one-third by 2025; but its outer continental shelf plan restricting access and limiting lease offerings does little to aspire to the goal. Worldwide, nations are taking steps to increase energy production and increase their offshore reserves. China, Brazil, Columbia, Cuba, the Middle East, and other countries understand the economic importance of offshore drilling and increasing domestic oil supplies.

By this 5-year plan, no new drilling or new lease sales will occur during President Obama’s term in office despite the overwhelming support of the American public for new offshore energy production. The President’s plan puts new energy production and American jobs created by new offshore drilling off-limits. His plan provides for jobs overseas that could be here in the United States, forfeits new revenue from lease sales, and denies access to American energy that would lessen our dependence on OPEC oil. Developing the United States’ offshore resources would create over a million jobs, generate billions in revenue and significantly reduce foreign oil imports.