Senator Bingaman’s proposal requires 24 percent of electricity generation in 2015 to be from qualified “clean” sources of energy increasing to 84 percent in 2035 and remaining constant thereafter. The bill uses a byzantine description of what is “clean” energy. For example, all existing and new wind, solar, geothermal, municipal solid waste, and landfill gas electric generating plants get full credit. Also, all hydroelectric and nuclear plants or additions to existing plants placed in service after 1991 get full credit (apparently plants placed in service before 1991 are not considered “clean”).

Generation from hydroelectric and nuclear units operating before 1992, while not receiving any credit are also not required to purchase credits to cover the generation they produce as non-qualifying fossil fuel plants must do. Coal and natural gas plants receive partial credits based on their carbon intensity, that is, the amount of carbon dioxide emitted per unit of generation.

Biomass generators are assumed in the EIA study to be carbon-neutral and receive full credit. However, the bill specifies that the carbon intensity of biomass will be based on a required study undertaken by the National Academy of Sciences. Also qualifying for credits based on their carbon intensity are combined heat and power units that have a system efficiency greater than 50 percent.

The Impact of the Standard

Non-hydroelectric renewable generation increases by 42 percent over reference case levels in 2025 and by 34 percent in 2035. Wind and biomass technology show the largest increases. Solar generation under the clean energy standard increases in the residential and commercial sectors by 71 percent over the reference case in 2035, but there is a corresponding drop of solar photovoltaics in the electric generating sector of 68 percent compared to the reference case in 2035, with the shift taking place mostly in California due to timing and market dynamics. 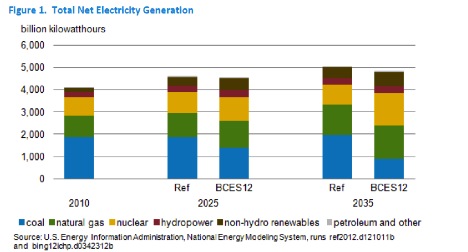 Note: BCES 12 denotes the results under the Clean Energy Standard

Electricity Prices. Average national electricity prices are 18 percent higher in 2035 than in the reference case with the difference in prices increasing over time as compliance moves from using more natural gas and biomass at existing facilities and towards requiring investment in new combined cycle, renewable, and nuclear capacity. Prices vary regionally by exempt versus non-exempt electricity providers, the state regulatory structure, and regulator discretion, which determines how credit revenues and expenditures are implemented in retail electricity prices. By 2030, depending on the region, providers covered by the Clean Energy Standard pay from 3 percent to 30 percent more than providers exempt from the Standard in the same region. 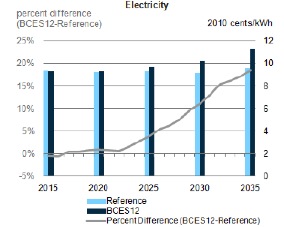 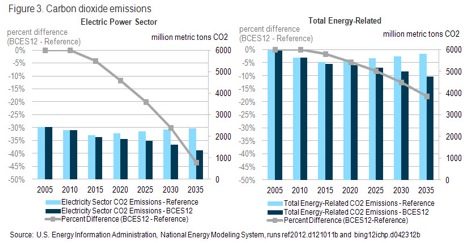 Any time policy deviates from what the market intends, prices are higher for consumers. It is no different for a Clean Energy Standard than for any other policy in this regard.  The United States has vast coal resources, more than any other country in the world. A Clean Energy standard would have those resources remain in the ground and ask other sources to pick up the 20 percent of U.S. energy currently supplied by coal.

What Nordhaus gets wrong about climate change