Predictions for oil consumption, domestic and global, and oil prices vary, but with $3.00 per gallon gasoline 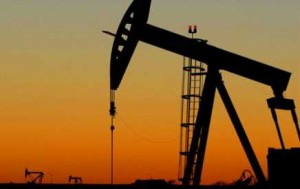 prices hitting during the holidays, the outlook for 2011 seems to be for even higher prices at the pump. Numerous reasons prevail for higher prices and higher consumption. Globally, China and some other developing countries recovered from the global recession rather quickly compared to many developed countries and are in need of even more energy to fuel their rate of economic growth. China, who recently took over the number one slot in auto sales from the United States, is continuing to see huge growth in those sales, partially spurred by government incentives for small, efficient vehicles and vehicle growth in rural areas. Further, not only is economic growth spurring additional oil consumption in China, but the country is intent on filling its strategic petroleum reserve over this decade, increasing oil demand and prices even more.

Domestically, oil demand has grown more than originally predicted as oil and gasoline stocks have been drawn down due to increased transportation demand and the onset of cold weather. Surprisingly, sales of sport utility vehicles led U.S. vehicle sales growth statistics for the first 11 months of 2010. And, U.S. consumers seem to have resumed their holiday travel even in the wake of $3.00 per gallon gasoline prices. Heating oil demand is on the upswing as a result of the recent cold weather and snow blizzards in the Northeast, where oil is used as a heating fuel.

While oil prices are currently in the $90 per barrel range, many forecasters feel that $100 per barrel is just around the corner. Both the supply and demand for oil factor into its price. With global oil demand increasing, supply must keep up or prices will rise. Unfortunately, the U.S. has less domestic oil production than originally expected due principally to the Obama Administration’s moratorium and de facto moratorium on offshore oil drilling. Other actions of the Administration such as the cancellation of existing oil permits in Utah and Montana[i] and the remanding of drilling permits in Alaska[ii] will affect oil production in the future. Our government’s actions along with higher demand and OPEC’s decision to keep its production at roughly target levels have moved oil prices up. While OPEC has spare production capacity and can up its production easily, as it produces more and reduces that capacity, prices could again rise.[iii]

Gasoline prices have also inched up because of higher crude oil prices and higher refinery margins. Added to that, the Environmental Protection Agency recently announced new environmental regulations for refineries, which will result in even higher gasoline prices. Some forecasters are seeing gasoline prices between $3.25 and $3.75 per gallon by early this year[iv], followed by prices at $4 per gallon, and even $5 per gallon within a few years as their regulations take hold.

The Near Term Domestic Supply and Demand Picture

The Obama Administration has yet to realize that the majority of the America public value other vehicle attributes more than efficiency. “You have about 5 percent of the market that is green and committed to fuel efficiency,” said Mike Jackson, the chief executive of AutoNation, the largest auto retailer in the country.” But the other 95 percent will give up an extra 5 mpg in fuel economy for a better cup holder.” While Mr. Jackson has been critical of American vehicle choices, stating at times his preference for government-mandated efficiency standards and higher gasoline prices , families choose vehicles to meet their multipurpose needs, wants and desires. To date, Americans have freely chosen vehicles that best meet their perceived needs for capacity, safety and performance, and that continues to include sport utility vehicles.

While additional technically recoverable oil exists offshore and in Alaska, our government is keeping us from using those resources, making us import from foreign countries instead. Net oil imports are expected to increase by 140,000 barrels a day (1.5 percent) in 2011 as a result.[xi] Unfortunately, this trend is the opposite of what we had recently been experiencing. In 2009, U.S. oil production increased by 410,000 barrels per day[xii], the largest increase of any oil-producing country in the world.[xiii] Net oil imports in 2009 declined by 1,440, 000 barrels per day (13 percent)[xiv] due to both increased domestic production and lower demand.

While the Department of Interior just announced that 13 companies could resume deepwater drilling offshore in the Gulf of Mexico without submitting new environmental plans, we will have to see whether that announcement is for real or if the Obama Administration will throw another monkey wrench into the situation as they have been doing all along.[xv] According to Randall Luthi, president of the National Ocean Industries Association, “It appears to be a step in the right direction.”  However, he said, “there are still major questions and some confusion among the companies about what is being required.”[xvi]

Goldman Sachs sees oil prices hitting the $100 mark later this year as OPEC reduces its spare capacity to meet demand. OPEC was able to increase its spare capacity substantially because of the global recession. Now, with global oil demand growth at around 2 million barrels per day, that spare capacity will be reduced, tightening the market, and raising oil prices, which will increase gasoline prices.[xviii] Other forecasters estimate oil prices between $75 and $120 in 2011.[xix]

But, other factors are at play to increase gasoline prices even higher. The Environmental Protection Agency (EPA) has announced new environmental regulations for refineries. While the specifics of the regulations are yet to be determined, a former Shell executive predicted that gasoline prices would reach $5 per gallon in 2012. Senator Kay Bailey Hutchison of Texas called the new regulations equivalent to a “new gas tax”.[xx]

This “new gas tax”, however, won’t do much for reducing U.S. greenhouse gas emissions. EPA has indicated that the new regulations will cut those emissions by only 5 percent, a far cry from the 17 percent reduction from 2005 levels by 2020 offered up by the Obama Administration at international meetings.[xxi] And they certainly will not compensate for China’s increases, whose economy is growing at 9 percent, and whose thirst for energy, all energy, is huge. 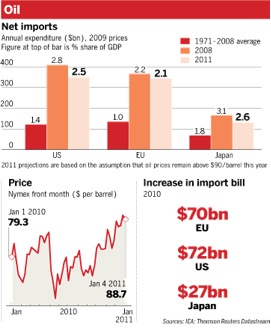 It should be noted that the Obama Administration is not opposed to high oil and gasoline prices. On the campaign trail, Senator Obama indicated that he didn’t object to high oil prices as long as they came about gradually[xxii], and Secretary of Energy Stephen Chu commented that U.S. gasoline prices should be  at Europe’s level[xxiii], which are currently around $7 a gallon.[xxiv]

But, these gentlemen are probably unaware of how fragile our economic recovery is and that higher oil import bills can damper it severely. According to the International Energy Agency, the ratio of countries’ import bills to GDP is close to the levels reached during the financial crisis in 2008. The United States, for example, has seen its oil import bill increase by $72 billion in 2010, representing 2.5 percent of our GDP. In 2008, it represented 2.8 percent of the U.S. GDP.  “Oil prices are entering a dangerous zone for the global economy,” said Fatih Birol, the IEA’s chief economist. “The oil import bills are becoming a threat to the economic recovery.” “Oil exporters need clients with healthy economies but these high prices will sooner or later make the economies sick, which would mean the need for importing oil will be less.”[xxv]

China’s Role in the Oil Market

China is expected to be the world’s largest auto market in 2011 with sales increasing 15 percent, usurping the United States in sales for the third year in a row.[xxvi] China’s incentives for fuel efficient vehicles and to increase vehicle growth in rural areas increased vehicle sales 34.9 percent through November 2010.[xxvii] Although those incentives expired at the end of 2010, vehicle sales are still expected to increase, but at a lower growth rate, adding almost 20 million units in 2011, compared to 12.8 million units in the United States.

To obtain the much needed oil to fuel these vehicles, China has invested widely across the globe in energy projects and aided oil producing countries through its loans for energy program. Most recently, China has upped its investments in Venezuela to $40 billion to acquire much needed oil resources and   provided loans to the country, funding infrastructure projects in return for oil deliveries in the future.[xxviii]

But China is further straining global oil demand by planning to enter into phase two of building its strategic petroleum reserve to buffer against supply disruptions. It completed the first phase in 2009 having stockpiled 103 million barrels, 12 days of supply. Analysts expect an additional 168 million barrels to be added during phase two which will begin this year, with a final goal of reaching 500 million barrels this decade. If China completes just one-third of phase two in 2011, that amount would represent 10 percent of the International Energy Agency’s forecasted increase in oil consumption in 2011. The China International Capital Corporation, a Beijing investment bank, indicated that the stockpiling along with increases to commercial inventories could increase crude oil prices by as much as $6.50 per barrel in 2011 and 2012.[xxix]

It seems that predictions have the oil market growing and oil prices rising in 2011. China’s high rate of economic growth at three times the predicted rate of the United States in 2011 and their huge increases in vehicle sales make their thirst for oil almost unlimited. And, the U.S. government is not helping the situation by limiting domestic oil production through cancelling and remanding oil leases and permits, instituting a moratorium on offshore drilling that has been extended de facto by issuing new demands on existing leases, and delaying offering leases in new areas in the Atlantic and the Gulf of Mexico by extending the time for review. Further, both President Obama and his Secretary of Energy see rising oil and gasoline prices as positive, not negative. Those officials may not react as positively once the American public realizes that our President and his cabinet are limiting domestic oil production through their actions and thereby increasing prices and slowing our economic recovery, possibly returning the United States back to the financial crises of 2008. While the Department of Interior has somewhat relented on one issue by announcing that companies with existing leases can continue to drill in the Gulf without further paper work, the effect of that announcement is yet to be seen. And, of course, the American public will have to absorb the result of our government’s actions, whether good or bad.

The True Cost of Green Jobs

Will Lucy let Charlie Brown kick the football this time?