WASHINGTON, D.C. — Today the Institute for Energy Research released a study that delivers a sobering economic analysis of six carbon tax scenarios, including one that mirrors the tax-and-rebate scheme proposed by the Climate Leadership Council.

The analysis, commissioned by IER and conducted by Capital Alpha Partners, LLC, uses standard scoring conventions (similar to those used by JCT, CBO and Treasury) to evaluate and model the economic impacts of carbon taxes set at a variety of dollar figures, with different phase-in durations, and with an array of revenue-recycling strategies.

The key findings include: 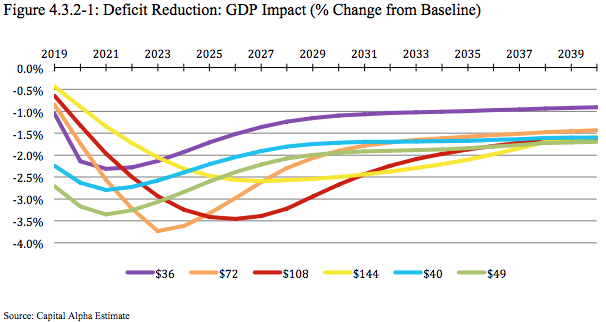 “The release of this analysis comes at an important time as numerous carbon tax proposals arise in Washington and are being considered for introduction in Congress. This study shows that when carbon tax scenarios are subject to the same scrutiny as an actual legislative proposal, it is all pain and no gain for the overall economy, with the states, in particular, being significantly impacted.

“Despite claims from carbon tax advocates, this analysis shows that a carbon tax will not improve our environment or U.S. fiscal stability in any meaningful way. In other words, carbon taxes are bad fiscal and environmental policy. Any member of Congress that lends their name to proposals like the one put forth by the Climate Leadership Council would essentially be taxing American families and small businesses, undermining our economic recovery, negatively impacting state governments, and increasing government spending, all while doing virtually nothing to improve the environment.”

The full study can be viewed here.