An important new study from Capital Alpha Partners, LLC uses standard budget-scoring rules to show carbon tax “deals” won’t live up to their promises to positively stimulate economic growth by providing new revenue for pro-growth tax cuts. Once we account for the loss in other tax receipts from a new carbon tax and the need to compensate poorer households, the net revenues available for tax reform are only 32 cents on the dollar. Thus, the proposals for using a carbon tax to engage in an ostensibly pro-growth tax swap are overstating how much in other tax cuts will be available, after the imposition of a new carbon tax.

The IER-commissioned study is entitled “The Carbon Tax: An Analysis of Six Potential Scenarios.” It looks at various levels and phase-in schedules for a carbon tax, and at various methods of using the revenue from a new carbon tax. The study concludes that in only one scenario—where all of the revenues from a new carbon tax are used to reduce corporate income taxes—does the economy benefit. In all other scenarios evaluated, including one that matches the Climate Leadership Council (CLC) proposal to start with a $40 per ton carbon tax and refund all revenues in a lump-sum fashion to taxpayers, the study finds that the economy takes a massive hit. Under the scenario most similar to the CLC proposal, GDP is held more than 1 percent below trend for almost a decade. Over the first ten years, the cumulative GDP shortfall is some $2.4 trillion.

To add insult to injury, the study shows that even with such negative impacts on the conventional economy, a carbon tax of any politically plausible magnitude would not lead the U.S. to achieve the targets of the Paris Climate Agreement. For all of these reasons, conservatives and libertarians should be very wary of those boosting the CLC proposal and others like it. A new carbon tax wouldn’t generate enough net revenue for a meaningful “tax swap,” which would slow economic growth while still allowing for more carbon dioxide emissions than interventionists are saying is acceptable.

The most important innovation in the new Capital Alpha Partners study is its application of conventional budget-scoring procedures to a hypothetical new carbon tax. The shocking conclusion: After accounting for the loss of other tax receipts and the need to compensate poorer households, there is only 32 cents to the dollar available for “reform.”

For full details, the interested reader should turn to the discussion in the actual study. But to summarize some of the main points here:

The above considerations are quite orthodox, and yet we have already “spent” 65 percent of the gross receipts from a new carbon tax. This is why proposals to use a new carbon tax to fund “green energy” investments and provide “supply-side tax cuts” are illusory; there’s simply not enough money to go around when real math is substituted for talking points.

The Capital Alpha study looks at different scenarios of the magnitude and phase-in schedule of a carbon tax, as well as the possible uses of the new revenue. The scenario closest to the Climate Leadership Council (CLC) proposal involves an initial $40 per ton carbon tax that then rises by 2 percent (in real terms) annually. Furthermore, it is revenue-neutral, with all net proceeds being returned to citizens in a lump-sum fashion. Finally, we note that the Capital Alpha analysis bends over backward to be generous; many of the issues discussed in the previous section are ignored, meaning that the following analysis assumes more “net” proceeds will be available for the lump-sum refund than will actually exist.

Even so, the results below show just how badly a new carbon tax will hit the economy, even with all proceeds being refunded in lump-sum fashion: 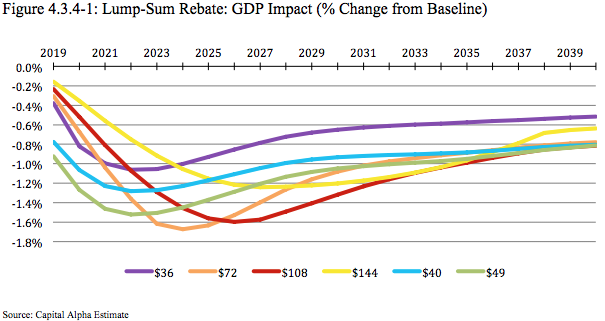 As the chart shows, all six of the various carbon tax profiles depress economic growth relative to the no-tax baseline, when the net proceeds are refunded in lump-sum fashion. In particular, the blue line (showing an initial tax of $40 per ton) is similar to the CLC proposal. Notice that the blue line is below the -1.0% horizontal bar for about nine years after implementation.

To get a sense of the cumulative medium-term impact, consider the following table taken from the study:

Consider in particular the fifth column, which shows the results of an initial $40 per ton carbon tax with lump-sum rebate. (To repeat, this is the closest scenario to the CLC proposal.) The 10-year cumulative GDP gap is some $2.4 trillion. In present value terms (in which future dollars do not weigh as heavily as current dollars), the 10-year GDP gap is still an enormous $1.9 trillion. If we look further out, the net present value of the 22-year GDP gap is $3.1 trillion.

An important new study from Capital Alpha Partners applies conventional budget-scoring rules to currently fashionable carbon tax proposals. The study finds that there are only 32 cents on the dollar available for “tax reform,” meaning that the proposals to impose a new carbon tax that won’t hurt the poor and will promote economic growth are simply impossible, as a matter of accounting.

When the study explicitly models a carbon tax proposal starting at $40 per ton and gradually increasing, with all net proceeds being refunded in a lump-sum fashion, this is very similar to the Climate Leadership Council proposal. Yet the study concludes that this approach would cause a cumulative GDP gap over the first ten years of $2.4 trillion ($1.9 trillion in net present value terms). On top of hurting economic growth, this carbon tax scenario wouldn’t even come close to leading the U.S. to hit its original targets in the Paris Climate Agreement.

The new study from Capital Alpha Partners underscores just how flimsy are the “conservative” carbon tax proposals. The math simply doesn’t add up. Once we account for the loss in other tax receipts and the need to compensate poorer households, there isn’t enough left for “reform” that could protect the economy from the hit to consumers of energy and transportation caused by the carbon tax.

The Carbon Tax: An Analysis of Six Potential Scenarios

Wind Farms Could Cause Surface Warming