The Carbon Tax: Analysis of Six Potential Scenarios is a study commissioned by IER and conducted by Capital Alpha Partners. The analysis uses standard scoring conventions (similar to those used by JCT, CBO and Treasury) to evaluate and model the economic impacts of carbon taxes set at a variety of dollar figures, with different phase-in durations, and with an array of revenue-recycling strategies.

The key findings include: 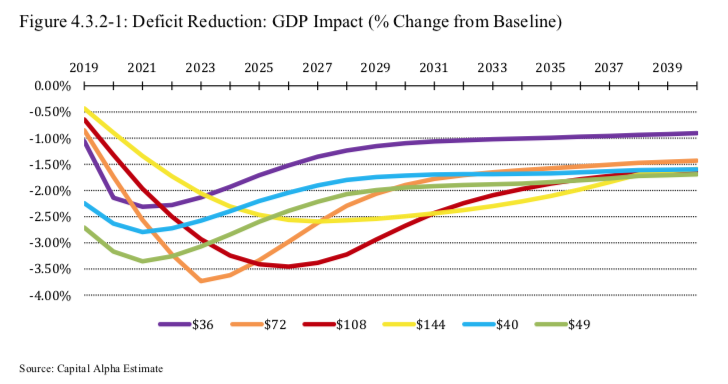 We present a macroeconomic analysis of current representative carbon tax proposals considered as if they were actual legislative proposals before Congress and scored using scoring conventions similar to those used by the Joint Committee on Taxation (JCT), the Congressional Budget Office (CBO) and the U.S. Treasury Department Office of Tax Analysis (Treasury).

A special focus of our study is the role of a carbon tax as a revenue raiser in pro-growth tax reform. There have been many suggestions that a “tax swap” of growth-oriented tax cuts financed by a carbon tax could produce incremental economic growth. We find that this premise would be difficult to achieve using standard scoring conventions. We also examine the possibility of a tax-for-regulatory swap in which a carbon tax would replace all existing regulation and still allow the United States to meet its obligations under the Paris Agreement. We find this premise difficult to achieve as well. A carbon tax would reduce emissions but could still only achieve Paris Agreement obligations as a part of a comprehensive carbon mitigation plan. This is in agreement with World Bank and International Energy Agency (IEA) conclusions and is consistent with the Treasury’s own modeling.

In particular, we find that:

A review of studies from the World Bank and IEA put the carbon taxes we model into a global context. The carbon taxes we examine, if enacted, would be the highest economy-wide carbon taxes in the world. They would raise average annual revenues of up to nine times the total amount of carbon-related revenues collected worldwide in 2017 during their first 10 years.

In our study, we rely on standard data and projections from government sources only. These sources include the IEA, World Bank, Organization for Economic Cooperation and Development (OECD), JCT, CBO, Office of Management and Budget (OMB), Energy Information Administration (EIA), Bureau of Economic Analysis (BEA), Bureau of Labor Statistics (BLS), and Census Bureau. We perform our economic modeling with a commercial macroeconomic model that has been widely used for public-sector forecasting at the state and local level for decades. We estimate carbon tax revenues raised and carbon emissions reduced using an open- source model developed by a state government to assist in the implementation of a carbon tax.