At a plant near the border with Finland, Russia is burning an estimated $10 million worth of natural gas every day, which would have been exported to Germany prior to Russia’s invasion of Ukraine.  Supposedly, Russia was burning the gas because “they couldn’t sell it elsewhere.” The burn off is releasing large volumes of carbon dioxide and soot, which Europeans are trying to reduce as they turn to renewable energy. While Russia burns its natural gas, Germany and much of the rest of Europe are in the midst of the most severe energy crisis in modern times, one with potentially horrific humanitarian outcomes as about one-third of Britons will be in energy poverty this winter. Record global gas prices, now trading as high as $100 per million Btu (about $600 per barrel in oil equivalency) in onshore European markets, are putting pressure on U.S. LNG export terminals to increase production. President Biden, however, is doing nothing to increase domestic natural gas supplies, and is instead increasing natural gas prices to American families going into the winter heating season all in the name of his “green energy transition.” 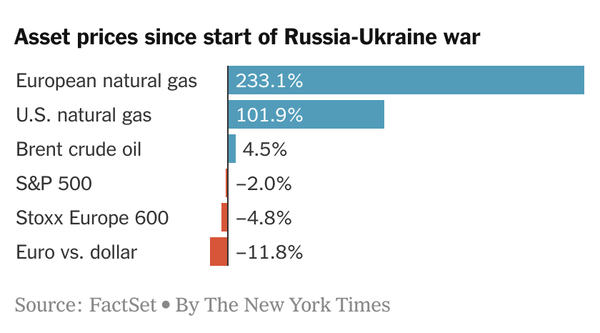 The Russian Burn-Off of Natural Gas

According to an analysis by Rystad Energy, about 4.34 million cubic meters (~153 million cubic feet) of Russian natural gas are being flared every day from a new liquefied natural gas (LNG) plant at Portovaya, north-west of St Petersburg. Burning gas in controlled circumstances such as electrical power plants produces less pollutants. Portovaya is located close to a compressor station at the start of the Nord Stream 1 pipeline, which carries natural gas under the sea to Germany and from which Russia curtailed supply flows to just 20 percent of capacity after having closed the pipeline for annual maintenance in early July and blaming technical issues and sanctions for the lower flows. Supposedly, sanctions against Russia were not allowing a turbine to arrive from Canada where it was being repaired. Germany now has the turbine, but Russia refuses to give it the required paperwork to ship it to Russia. Russia will again close Nord Stream 1 for maintenance—this time on August 31 for an announced 3 days.

Since June, researchers have noted a significant increase in heat emanating from the Russian LNG facility that looks like gas flaring—the burn-off of natural gas. According to the World Bank, even before June, Russia was the number one country when it came to the volume of natural gas flaring. Because the flaring is so close the Arctic, besides releasing about 9,000 metric tons of carbon dioxide equivalent every day, it also results in black carbon, which are sooty particles produced through the incomplete burning of fuels. Flaring is the dominant source of black carbon deposits in the Arctic, and it is argued they darken snow and ice, absorbing radiant heat from the sun.

Germany’s energy transition to “green” energy started after the Fukushima nuclear accident in Japan with Germany shuttering its nuclear units in favor of intermittent wind and solar power. Germany now only has 3 nuclear reactors operating, supplying 6 percent of its electricity, and it plans to close them by the end of the year despite the pending energy crisis. To pay for the wind and solar units, Germany fined its households, increasing residential electricity prices to 3 times those in the United States.

Germany recently issued a number of orders to help ease energy shortages that were a result of its transition to renewable energy and have been exacerbated by Russia’s invasion of Ukraine. The orders are the first nationally mandated energy-saving measures that include required reductions in temperature inside public buildings, an overnight ban on illuminated advertisements and buildings, and prioritizing the transportation of energy supplies on Germany’s national railways. The measures are expected to reduce natural gas consumption by at least two percent. Its energy crisis was also compounded by one of the worst droughts across Europe in years. Some German waterways are so low that barges are unable to pass with full loads of coal to supply power plants. Many coal plants that were closed as part of Germany’s “green energy” transition were restarted to reduce Germany’s reliance on Russian gas and to save natural gas for heating this winter.

With river traffic hindered, the country must rely more on railways delivering energy products that now have priority over passenger trains. Germany’s railways, like its airlines, have been hampered by staff shortages because of the coronavirus lockdowns. The order requiring railways to prioritize energy shipments does not need approval by the German parliament, and is temporary, lasting only six months. Many of the other energy-saving measures recently issued are also six-month orders that do not require parliamentary approval. Those measures include a requirement that public buildings be heated to no more than 66 degrees Fahrenheit — two degrees less than the previously recommended minimum temperature with exemptions for facilities such as hospitals and schools.  Germans, accustomed to broken promises from their government about their energy transition, have taken to gathering wood to ensure they can make it through the winter.

According to Britain’s National Grid, while the nation is not reliant on Russian gas to the extent that the rest of Europe is, the cessation of natural gas supplies into Europe could affect Britain, particularly through very high prices. National Grid intends to handle the expensive and unpredictable energy, along with any outages, by delaying the closure of coal plants and encouraging greater participation in conservation from energy users.

Household energy bills in the U.K. were expected to increase 40 percent this fall, but recently the government regulator announced they will jump twice that, to 80 percent, which follows a 54 percent increase in April and brings the average household’s annual bill to £3,549 ($4,157). That means that 11 percent of the median household income of £31,400 ($36,779) will go toward central heating, cooking and lighting. Britain’s household energy prices are capped, which can result in large price increases to occur twice a year rather than continuously. Lower-income households in particular bear the brunt as prices for goods and services skyrocket and companies lay off employees. While there is no cap on price increases for British businesses, some small businesses are required to pay a steep deposit before a utility company will supply them because energy companies are concerned that high prices will push more small firms into insolvency.

The underlying cause of Britain’s energy problems is not Russia’s invasion of Ukraine, which just exacerbated the problems. The main problem is its fixation with climate goals, especially the ambition to achieve net-zero carbon dioxide emissions by 2050. To meet that goal, Britain has banned hydraulic fracturing and has enacted windfall-profits taxes on North Sea oil and gas producers that deters investment. It has preferred deployment of intermittent wind and solar technologies, paid for by ratepayers and taxes. While Russia’s invasion of Ukraine has hurt, the U.K.’s policies made it vulnerable to global shock.

The U.K. is now building new nuclear plants, which will take years to come online, and probably increase power prices further. Politically acceptable wind and solar technologies, that are intermittent and therefore unreliable, increase the cost of the electric grid for balancing supply and demand when the winds are not blowing and the sun is not shining by needing back-up power from coal or natural gas technologies or expensive batteries. Since more than 80 percent of English households rely on natural gas to heat their homes, competition for gas supplies for heating drives up the cost of supplying power. The government also adds about £153 ($179) in “green” levies and a 5 percent consumption tax directly onto household bills despite assurances from politicians that renewable energy will be less expensive than conventional energy.

Russia is flaring its natural gas at an LNG plant near the Nord Stream 1 pipeline because it does not want to supply Europe with natural gas, using energy as a weapon for the sanctions imposed by the West for Russia’s invasion of Ukraine. Russia’s withholding natural gas has exasperated Europe’s energy problems caused by its transition to “green” energy, which is placing much of Europe in an energy crisis with possible energy shortages this winter and extremely high energy prices. Natural gas prices onshore Europe are over 10 times those in the United States, even though Biden’s anti-oil and gas policies have doubled or tripled U.S. natural gas prices since his taking office.

Almost one-third of the British population are expected to be in energy poverty this winter with energy prices to increase 80 percent this fall. Britain’s climate and energy goals are basically the same as President Biden’s climate and energy goals and those of Democrats in Congress, California and New York. The recently signed climate/tax bill (the so-called Inflation Reduction Act) and the Biden administration’s regulatory actions on fossil fuels, combined with its favors for renewable energy follow in Britain’s policy footsteps. Britain’s skyrocketing energy prices should be a lesson to Americans as Biden’s climate and energy policies are implemented.