Earlier this month, CATO published the Working Paper on carbon taxes that I co-authored with climate scientists Pat Michaels and Paul Knappenberger. For long-time IER readers, much of the analysis is familiar, as we covered it extensively in our Comment on the Social Cost of Carbon.

However, our CATO paper contains several new lines of criticism of the case for a carbon tax from the perspective of both economics and climate science. In the present post, I’ll summarize the most important points that Michaels and Knappenberger made, showing that the “settled science” on climate change is hardly what the alarmists have been telling Americans.

How Are the Climate Models Performing?

First, consider the following chart, which is Figure 2 in the CATO paper: 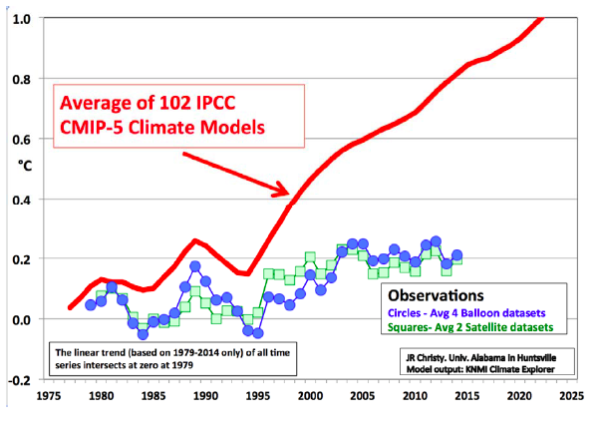 The chart above was taken from an analysis of John Christy, climate scientist at the University of Alabama-Huntsville. As our CATO paper explains:

[Figure 2] shows model-predicted and observed temperatures, not at the surface, but in the lower [atmosphere], roughly from 5,000 to 30,000 feet. These are less compromised by earth’s complicated surface and man’s role in altering it. More important, though, is that it is the vertical profile of temperature that determines atmospheric stability.

When the “lapse rate”, or the difference between the lowest layers and higher levels is large, the atmosphere is unstable. Instability is the principal source for global precipitation. While models can be (and are) “tuned” to mimic surface temperatures, the same can’t be done as easily in the vertical.

As the figure indicates, the air above the surface is warming far more slowly than had been predicted, so that the difference between the surface and the upper air has changed very little. This means that observed global precipitation should be the same as it was. The forecast warming of the upper layers (in red) would reduce the surface‐to‐upper air temperature difference, which would tend to reduce precipitation.

That means that the models themselves are making systematic errors in their precipitation projections. This has a dramatic effect on the resultant climate. [Murphy, Michaels, and Knappenberger, p. 12, bold added.]

Thus we see that it is not some “denier” talking point to claim that the conventional suite of climate models have serious problems. But don’t take the word of Christy, Michaels, and Knappenberger on it—in the next section, we’ll quote from other featured IPCC authors.

New Estimates, From IPCC Authors, Show Climate Not As Sensitive to Humans

Another crucial part of our CATO Working Paper summarizes the testimony that Michaels gave to Congress back in July (video here). Specifically, when the Obama Administration’s Interagency Working Group (IWG) on the Social Cost of Carbon estimated the harm to humans from future greenhouse gas emissions, their procedure necessarily involved projections of the physical relationship between the temperature and the level of carbon dioxide concentrations in the atmosphere.

The precise concept here is called Equilibrium Climate Sensitivity (ECS). It turns out that the Obama IWG continued to use a high-end estimate of the ECS, despite more “optimistic” findings in the technical literature. As our CATO paper puts it:

The 2013 study of Otto et al., which was available at the time of the IWG’s 2013 revision, is particularly noteworthy in that 15 of the paper’s 17 authors were also lead authors of the 2013 IPCC report. Otto has a mean sensitivity of 2.0°C and a 5‐95% confidence interval of 1.1 to 3.9°C. If the IPCC truly defined the consensus, that consensus has now changed. Instead of a 95th percentile value of 7.14°C, as used by the IWG, a survey of the recent scientific literature suggests a value of 3.5°C—more than 50% lower. This is very significant and important difference because the high end of the ECS distribution has a large impact on the SCC determination—a fact frequently commented on by the IWG. [Murphy, Michaels, and Knappenber, p. 9, bold added.]

Note the part I put in bold. It’s not merely that a particular article in the scientific literature comes up with a much more “optimistic” estimate. It’s that an article submitted by 15 scientists who were lead authors of the latest U.N. consensus report contained such “good news.”

Again, just more evidence that the pessimism in the past was unfounded. The latest, mainstream view in the physical climate science from undisputed experts shows that the Obama Administration (among other groups) is plugging in numbers that yield inaccurately alarming estimates about the harm of emissions—and hence serve to justify more aggressive government countermeasures, such as a carbon tax.

My new CATO Working Paper with climate scientists Pat Michaels and Paul Knappenberger crystallizes some of the major weaknesses in the case for a U.S. carbon tax. In this post, I’ve summarized two key points in the physical science. In the future, I will relay some of our key (and new) points from the economic side. Both theory and history show that the case for a U.S. carbon tax is far more dubious than the public has been led to believe.