The Institute for Energy Research (IER) has just released a study by Dr. Alex Robson of Griffith University in Australia, on his country’s experience with a carbon tax. In this post I summarize the key lessons for Americans from the Australian experience, which include: soaring electricity prices, rising unemployment, income tax hikes (not cuts), and more command-and-control regulations.

Most readers won’t be surprised to learn that pro-carbon tax economists were none too happy with the new study. A few of them were quoted in a September 5 E&E News article by Evan Lehmann, titled, “Energy group launches political attacks on carbon tax supporters.” In this post, I’ll quote their objections to the study and offer my responses.

The Australian Carbon Tax and Unemployment

Here’s how the E&E reporter set up the “experts” (his term) to criticize the Australia study:

A key point of the report promoted by the Institute of Energy Research is that the tax contributed to Australia’s rising unemployment rate. It points to anecdotal evidence that carbon-intensive companies are laying people off. But that’s a “one-sided” approach, said Rob Williams, an economist with Resources for the Future who studies carbon taxes, adding that the report “is not fairly assessing the policy.”

“A carbon tax would likely mean fewer jobs in carbon-intensive industries, but more jobs elsewhere in the economy. This report talks about the likely job losses from the carbon tax, but not about the job gains,” Williams said. “There are a ton of potential explanations for why Australia’s economy has slowed slightly.

“Again, the report never says that the carbon tax caused higher unemployment in Australia,” he added. “And it’s good that it doesn’t, because one can’t draw that conclusion.”

It’s true that the report contains specific examples of real-world companies who are laying people off in Australia, with statements from the people involved saying it is because of the carbon tax. Here are the examples of real companies laying off real people:

22 May 2012: Norsk Hydro announced the closure of its aluminium smelter at Kurri Kurri in New South Wales, resulting in the loss of jobs for around 350 fulltime workers and 150 contractors. The company had made at least one submission to the

Government in 2009 highlighting that the carbon tax “would put existing operation[s] at risk and render an expansion unviable, stripping a potential $4 billion dollar investment and 3000 jobs from the Australian economy.”

19 December 2012: Tamworth-based Grain Products Australia announces the appointment of voluntary administrators amid concerns of impending insolvency, putting the future of 68 employees at risk. The company’s directors cite a 75 per cent rise in electricity costs over the preceding three years as pivotal to the decision—and include reference to the carbon tax, saying that there has been no relief provided by the Federal Government and that “it is very hard for manufacturing in Australia to survive with these sort of increases.”…

18 January 2013: Penrice Soda announces it will cease soda ash production at its Adelaide plant in June, accounting for the loss of 60 jobs. The company specifically cites the carbon tax, among other factors, as having had a major bearing on its decision.

11 March 2013: CSR announced a restructure of its glass manufacturing business, Viridian, with the loss of 150 jobs overall at two sites—Ingleburn and Wetherill Park. Rob Sindel, the Managing Director, confirmed that the carbon tax had added around $500,000 to the annual costs at its Ingleburn facility. [Robson study, pp. 38-39, bold added.]

Now it’s true, if the Robson study had only gone around, looking for companies that were hurt by the carbon tax, then that would indeed be “one sided,” as the Resources for the Future economist (Rob Williams) said to the E&E reporter. Fortunately, the Robson study also showed the total number of unemployed in Australia, and indicated the start of the carbon tax. Here’s the chart: 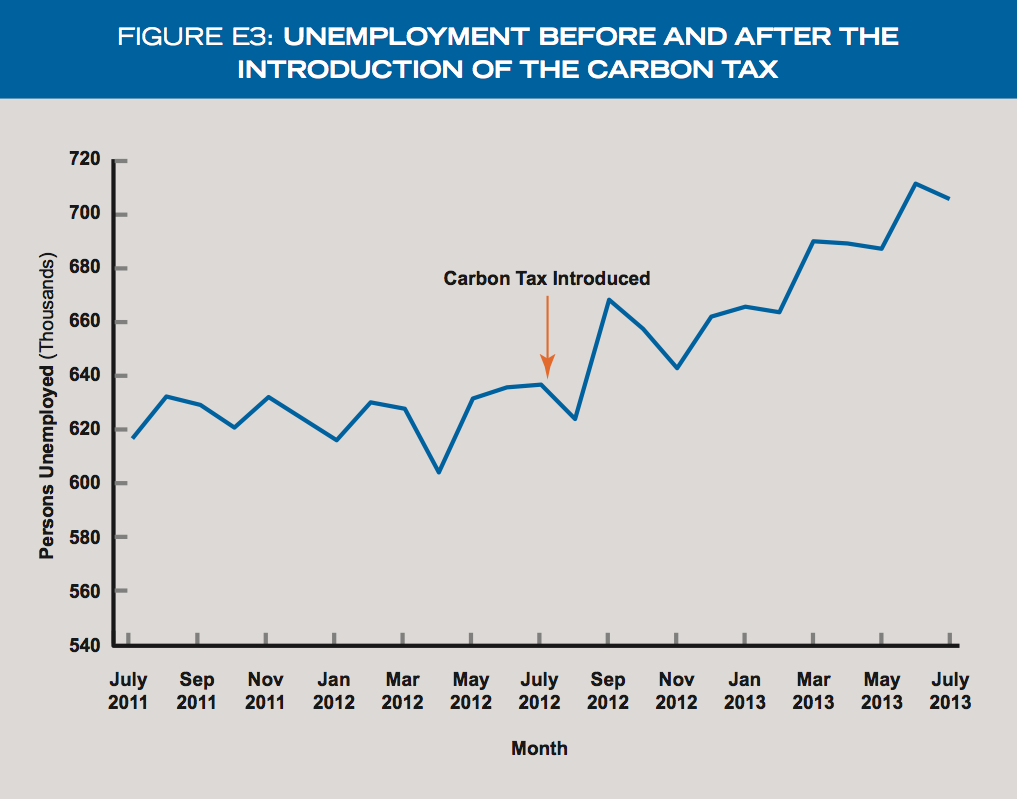 To be sure, in empirical science you can never prove anything; correlation doesn’t necessarily mean causation. As Williams said to the reporter, “There are a ton of potential explanations” for the slowdown in the Australian economy. After all, it’s possible that businesses down under are closing up shop because of the impending finale of “Breaking Bad.” But if I had to guess, I would say that the one-two punch of the new carbon tax, plus the associated spike in electricity prices, had a lot more to do with the sudden change in the Australian economy.

The next objection in the E&E article—coming from “[a]nother leading economist” who’s so leading that he or she “asked not to be named”—is simply baseless. This anonymous critic described the “Australian model as one of the best in the world” and that it “provided ‘price stability’ for clean-tech investment.”

Yet the claim of “price stability” is even more troubling. One of the central points of Robson’s study is that there is no policy certainty in Australia. The following chart (from the Executive Summary) shows the quicksand political climate before the carbon tax: 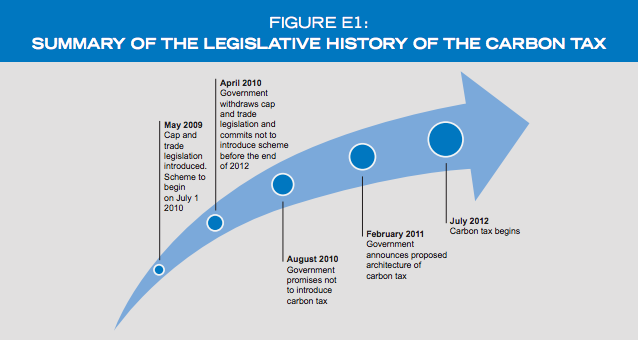 And now, as Robson’s study makes clear, there is just as much uncertainty. Originally the carbon tax was to be converted into a cap-and-trade scheme in 2015, but recently the government floated the idea of pushing that up to 2014. Yet depending on the September 7 election, the whole thing might be scrapped altogether.

Thus the case of Australia repudiates one of the central claims of the pro-carbon tax crowd: it does not provide certainty for investments in low-carbon-intensive technologies. It turns out, voters aren’t too happy about rising unemployment and soaring electricity prices, and they aren’t as nihilistic as certain U.S. economists when it comes to putting the blame on a new carbon tax.

When In Doubt, Utter the Magical Phrase “Peer Review”

Finally, another economist critic in the E&E News article played the interventionists’ favorite trump card in the climate change debate:

Ray Kopp, an economist who directs the Center for Climate and Electricity Policy at Resources for the Future, said that the conclusions in IER’s report “simply do not align with the bulk of analyses” on carbon taxes.

“Not to speak disparagingly of IER, but they are not going to get their stuff in the peer-reviewed literature,” he added.

It’s almost not even worth responding to Kopp, since he doesn’t say anything specific; refuting him is like tackling a ghost.

In the first place, Alex Robson has indeed published peer-reviewed papers in the academic literature, dealing with the interaction of public finance and Australian environmental policy. Further, Robson’s study (particularly the appendix) is full of the standard textbook treatment of these issues. Anybody glancing through the study will realize that Robson is a serious economist whose work cannot be dismissed as Kopp so glibly attempts.

Beyond that, which of the conclusions does Kopp have in mind, that go against the “bulk of analyses” on carbon taxes? Certainly not the one where Robson says policymakers need to assess the net benefit of all policy options—or does Kopp think policymakers should only look at a pre-determined list of policy options?

Further, several of Robson’s conclusions show how the case of Australia did not live up to the textbook promises of carbon tax proponents. For example, some of the peer-reviewed literature argues that carbon tax receipts could be used to lower income taxes, which (it is claimed) would more than offset the negative effects of the carbon tax and thereby achieve a “double dividend.” Now this is a controversial finding even in the peer-reviewed literature, as I explain here. But more relevant for our purposes, one of Robson’s conclusions is to say that there couldn’t possibly have been a “double dividend” in Australia, since their carbon tax went hand in hand with net income tax increases. So what can it even mean for Kopp to say Robson’s conclusions don’t mesh with the peer-reviewed literature? Is Kopp denying that more Australians (by a 4-to-1 margin) saw their income taxes go up, than go down?

For a different example, the peer-reviewed literature argues that a carbon tax is a “market” solution that is more efficient than top-down command-and-control regulations on emissions and energy efficiency. Robson points out that in the case of Australia, there were more command-and-control regulations introduced with the carbon tax. Is Kopp claiming that Robson invented this fact?

Alex Robson is a serious academic who has written an assessment of Australia’s carbon tax one year into its operation. Judging from the quality of the objections raised against it so far from pro-carbon tax U.S. economists, Robson’s work must be pretty solid.

Need a Job? The Oil and Gas Industry is the Place to Go

Oil shipments by rail, truck, and barge up substantially