Most oil and petroleum products are moved to refineries and consuming areas by pipeline, which is both the safest and most economical means of transporting them. However, due to a shortage of pipeline capacity, more and more oil and petroleum products are being moved by rail, truck, and barge. Those shipments almost doubled in 2012, and they are continuing to increase to move crude oil from the shale formations in North Dakota and Texas, and oil sands in Canada to U.S. refineries. Between 2011 and 2012, oil delivered to refineries by trucks increased 38 percent, crude moved on barges increased 53 percent and rail deliveries quadrupled. Because the nation’s pipeline infrastructure has not kept pace with growing domestic oil production, the market has had to rely increasingly on alternative transportation options. 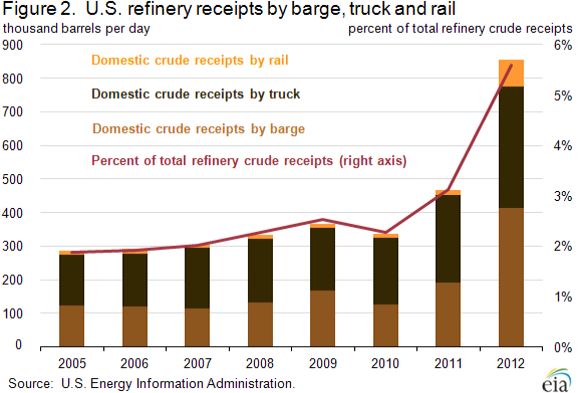 Between 2005 and 2010, 96 percent of crude oil was transported by pipeline and tanker ships to refineries. Inland refineries are generally reached by pipeline since pipeline transport has relatively low costs and high capacity. For imports and offshore production, tanker ships have been the primary form of transportation for crude oil. But in 2011, these two transportation forms began to decline in market share, representing 93 percent of the market in 2012.[i]

Because of the lengthy regulatory review process for expanding existing pipelines or building new pipelines, the transportation of crude oil and petroleum products has moved to rail and truck, which provide more flexibility because they can use existing infrastructure. Unless more pipeline capacity is built to deal with the increased domestic crude production, it is likely that these transportation modes will expand.

North Dakota is now the second largest oil producing state in the nation after Texas because hydraulic fracturing and directional drilling having unlocked billions of barrels of shale oil in the Bakken Shale formation. Because there is not enough pipeline capacity to move its oil production to refineries, North Dakota production accounts for a large share of the increased shipments of oil by rail. In North Dakota, rail moves 69 percent of the state’s 800,000 barrels a day of crude.

Railroads are also shipping U.S. crude oil to eastern Canadian refineries. Although the Midwest has been the traditional source for U.S. crude oil exports to Canada, an increasing amount of exports is being shipped from the Gulf Coast via waterborne transportation and the East Coast via rail. For example, crude oil from North Dakota is being shipped by rail and exported through New York State to Eastern Canada.

Likewise, some Canadian crude is being moved by rail to U.S. refineries. Foreign rail shipments were first reported in 2011, totaling almost 1,000 barrels per day–the highest volume of foreign oil-by-rail recorded since the Energy Information Administration started publishing the data in 1981. In 2012, those shipments increased to a new record of more than 11,000 barrels per day.

There are estimates that more than $40 billion in oil pipelines are now either under construction or being planned for the next few years.[iii] For example, Enbridge, a Canadian oil company, has almost doubled its capacity to move crude within the United States. Enbridge recently completed pipeline and rail expansions moving oil from the Bakken to markets around the country, increasing its capacity from 250,000 barrels of oil per day in 2011 to 475,000 barrels per day today, with most of the increase in pipeline capacity. Enbridge also announced another pipeline that would add 225,000 barrels a day capacity in 2016.[iv] And TransCanada’s southern route for the Keystone XL pipeline, the 450-mile Gulf Coast pipeline, through East Texas connecting Beaumont and Cushing, Oklahoma[v] is now 80 percent complete.[vi]

However, in the interim, oil companies and refineries needed to make adjustments to keep up with the increased crude production. Besides building new pipelines, changes have been made to existing oil-delivery systems. Last year, for example, a 16-inch pipe that was built to carry crude imported from Africa and Europe from the Port of Corpus Christi north was reversed to move crude south.  Some of that crude is loaded onto barges and towed toward refineries in Houston. Phillips 66, which has a refinery in Linden, New Jersey, moves crude by ship around Florida on a 2,200-mile journey to its N.J. refinery.

In the Eagle Ford shale oil formation in South Texas, oil production has increased to more than 500,000 barrels a day, from less than 1,000 in 2009. Some of that crude is being moved by heavy trucks causing traffic tie-ups and road disintegration because the roads were not designed for the weight and number of trucks. To repair and improve roads in oil-producing areas, the Texas Legislature appropriated $450 million. Recently, the Texas transportation department decided to convert 83 miles of state road in six oil-producing counties from pavement to gravel to reduce repair costs and slow traffic. Some of that Eagle Ford crude is also transported by truck to a barge canal about 100 miles to the west, which now moves 1.6 million barrels every month.

Increased oil production in the United States means that the infrastructure that transports it must also increase. Due to the regulation of pipelines and their slow approval process, the oil industry has found other more flexible means of transportation at its disposal, including rail, truck and barge that can use existing infrastructure. The Energy Information Administration reports major increases in the transportation of crude oil and petroleum products by these alternatives. Since pipeline transportation is safer and less expensive than these alternatives, however, about $40 billion of pipe construction are under way or planned over the next several years.  The shale oil boom is a major economic driver in our economy which is increasing investment and with it, jobs.

Colorado: An Energy and Economic Analysis