Germany’s policy of transitioning to renewable energy, called Energiewende, and phasing out nuclear power due to Japan’s nuclear accident resulting from a tsunami has caused the country to increase its coal consumption. The country burned more coal in 2013 than it did five years ago and will likely miss its greenhouse gas emission targets in 2020 because its carbon dioxide emissions are increasing. Germany generated 45 percent of its electricity in 2013 from coal, its highest level since 2007, to back-up its intermittent renewable technologies and to provide reliable baseload power.[i]

Germany already has one of the highest household electricity rates in the developed world. Power bills of households, shop owners, and small factories in Germany have increased by more than 100 billion euros ($134 billion) as renewable energy met a record 25 percent of demand last year.[1] This increase in renewable energy has wreaked havoc on the electric utilities in Germany. Because of renewable energy’s subsidized production cost, wholesale electricity prices in Germany dropped 60 percent since 2008. The nation’s biggest power producer, RWE AG, reported its first loss since 1949 last year as utility margins are being squeezed because German laws give green power priority on the electric grid.

Because wind and solar energy is intermittent, German utilities have had to dial their conventional power plants up and down rapidly to compensate. Traditional power plants are not efficient or profitable when operated this way, causing electric utilities to shut down facilities that may be needed as backup. Some believe the tried and true rules of electric power generation that have provided inexpensive, reliable power for generations may need to be revised to take account of the intermittent power production from renewables. For example, electric utilities may need to be paid to keep conventional power plants on standby for times when the wind is not blowing and the sun is not shining. While the German government has acknowledged the need for new rules, it has not figured out what they should be.[ii]

Germany’s Households Are Paying for Energiewende

Germany now has the second highest residential rates for electricity in Europe, second only to Denmark; just a decade ago, Belgium, the Netherlands and Italy had higher rates than Germany. Between 2005 and 2010, the annual increase in residential electricity rates in Germany was 4.3 percent. Since the tsunami hit Japan in 2011, the annual increase was 7 percent because Germany increased its solar and wind subsidies to spur their development so it could close down eight of its nuclear reactors. Germany’s 40 million households and other taxed consumers paid 106 billion Euros between 2000 and 2013 to renewable energy producers. The government estimates it could cost as much as 1 trillion Euros by 2040. Due to the higher prices, household electricity consumption has declined by about 1 percent per year since 2005. The economic toll on the country and its residents has made the government recently cut renewable subsidies by 29 percent on average to 120 Euros a megawatt-hour.

Germany is also taking an economic toll for the energy transition when job-creating investment leaves Germany for countries with lower power costs. For example, earlier this year chemical company BASF said it would reduce its investments in Germany from one-third to one-quarter of its global total.[iii]

Germany’s feed-in tariff requires distributors to buy electricity from green generators at fixed prices before buying power from other sources. By forcing renewables to be purchased, the tariff deprives traditional generators of revenue and makes it harder for them to forecast demand for thermal power plants that require millions of Euros of investment and years to build. As a result, Germany’s electric utilities have had to rely on cheaper coal plants when renewables cannot handle the demand.

Interestingly, the high prices created by the energy reform transferred power from traditional utility companies to private consumers. Most (46 percent) of Germany’s renewable electricity is generated by private individuals and farmers, compared with 5 percent generated by Germany’s 4 large electric utilities.[iv] (See chart below.) 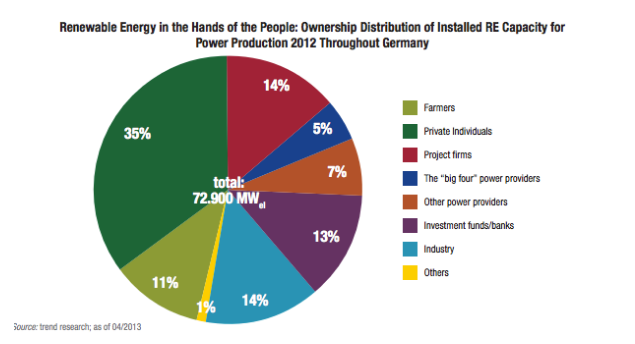 Wind Did Not Always Meet Expectations

As much as two-thirds of the wind capacity added in Germany did not achieve expectations. In the German state of Rhineland Palatinate, the wind needed to make the projects profitable did not materialize. While a wind turbine must run a minimum of 1700 hours at full capacity each year in order to make a profit, in 2013, the wind turbines averaged just over 1400 hours. In Mainz, the community’s 20 wind plants in operation between 2005 and 2010 did not make any profit; rather they brought in a slight loss. In the city of Trier, average wind conditions were planned for, but the actual winds were weak, at just 80 percent of their expected speeds. Some say too much wind was planned in Germany too fast resulting in shoddy and improper planning; and unexpectedly high repair, maintenance, and insurance costs. [v]

Germany’s move to intermittent renewable technologies has resulted in increased coal use, which has added to its carbon dioxide emissions. Between 2005 and 2010, Germany’s carbon-dioxide emission reductions from power plants averaged an annual one percent decline, but they increased by the same amount between 2011 and 2013 as nuclear plants were taken off-line and coal was the only profitable technology to back-up wind and solar power. As a result, it is estimated that Germany’s 40 percent reduction target in greenhouse gas emissions from 1990 levels by 2020 may be missed by as much as 7 percentage points.

After pouring billions of Euros into renewable energy, the Germans are left with spiraling power prices, energy market chaos and, collapsing companies. Deriving a large proportion of energy from renewables is proving extremely costly; the government indicates that it could cost one trillion Euros by the end of the 2030s. Its renewable energy program has devastated its utility companies, whose profits from power generation have collapsed. Germany’s coal renaissance and its increasing carbon dioxide emissions should be a cautionary tale in what happens when expensive intermittent renewable technologies are being promoted and nuclear energy is being phased out without the economic realities of the transition being properly assessed.

[1] Germany’s energy-intensive industries get exemptions from the renewable energy subsidies.