Environmentalists and governments are making it more and more difficult to get approval to build pipelines, so producers are increasingly using rail to get their oil to refineries for processing into products that the American public needs. Rail now moves about 939,000 barrels of oil a day or about 12 percent of the oil produced in the lower 48 states. If all the railcars carrying crude oil on a single day were hitched together to a single locomotive, that train would be about 17 miles long.

Rail shipments of oil have increased 44-fold since 2008. Over the past 5 years, revenues of the major railroads moving petroleum have increased by more than 8,000 percent–from $25.8 million in 2008 to $2.15 billion in 2013.  While it costs more to move petroleum by train than by pipeline, railroads have greater flexibility than pipelines in bringing shipments to the market with the highest prices, obtaining higher revenues for petroleum producers.[i]

The oil industry’s use of rail is giving farmers and other food industries competition in moving their products. A backlog has been created on the rail system for carrying soybeans, wheat, sugar beets, and other crops, as well as cereals, breads, and other goods from America’s bread basket to markets, meaning that farmers and food manufacturers have had to store more of their crops and products. A study by the North Dakota State University indicates that farmers could lose more than $160 million dollars because of railway congestion: $66.6 million in lost wheat, corn and soybean revenue from January to mid-April and an expected $95.4 million more in losses if their remaining inventory gets stranded.[ii] A study by the Minnesota Department of Agriculture estimates that Minnesota corn, soybean and wheat growers lost nearly $100 million.[iii]

Oil is a more attractive commodity to railroads than farm products because it has higher profit margins, shippers are willing to pay more for the cars, and it is transported year round, unlike grain shipments, which are mostly transported a few months during harvest. Railroads are more interested in a steady market for their services than a sporadic one. But, nonetheless, it is causing problems for farmers and for the manufacturers of their products when the shipments do not arrive in time and when penalties have to be paid for the delays.

Some believe that shipping crude by rail has become a permanent part of the nation’s energy infrastructure; others believe the necessary pipeline infrastructure will eventually be built. But until that happens, even pipeline companies have entered the rail business, building terminals to load and unload crude oil. A little-noticed map in the Department of State’s environmental impact statement for the Keystone XL pipeline graphically demonstrates the rise of oil by rail.

Railroads own 140,000 miles of track in the United States, and the cargo that the system carries can be moved from coast to coast, north to Canada and south to Mexico. By law, railroads cannot turn down cargo, so oil shippers realized rail was an advantageous way to move their product. As a result, loading terminals have proliferated. With a cost of about $50 million per loading terminal, it is equivalent to the estimated cost of building just one mile of the Keystone pipeline. A loading terminal can be built under contract in 12 months and be paid off in 5 years so railroads do not need lengthy contracts. Pipeline builders, on the other hand, usually require drillers and refiners to sign long-term shipping contracts before they start laying pipe. Railroads are also seen as a more beneficial means of shipping if there is uncertainty regarding the size and productivity of the oil field.

In 2006, North Dakota faced a “crude oil transportation crisis” because oil production was increasing but the pipelines that served the state were full. Entrepreneurs capitalized on the situation and by the end of 2013, there were 13 large rail loading facilities in the state with the largest able to handle 200,000 barrels per day. There was also a surge in facilities for unloading oil and transferring it to refineries; such terminals are operating or planned in nearly two dozen states and Canadian provinces. Due to limited pipelines, trains carry 75 percent of the 1 million barrels of crude produced each day from the Bakken in North Dakota.[iv] 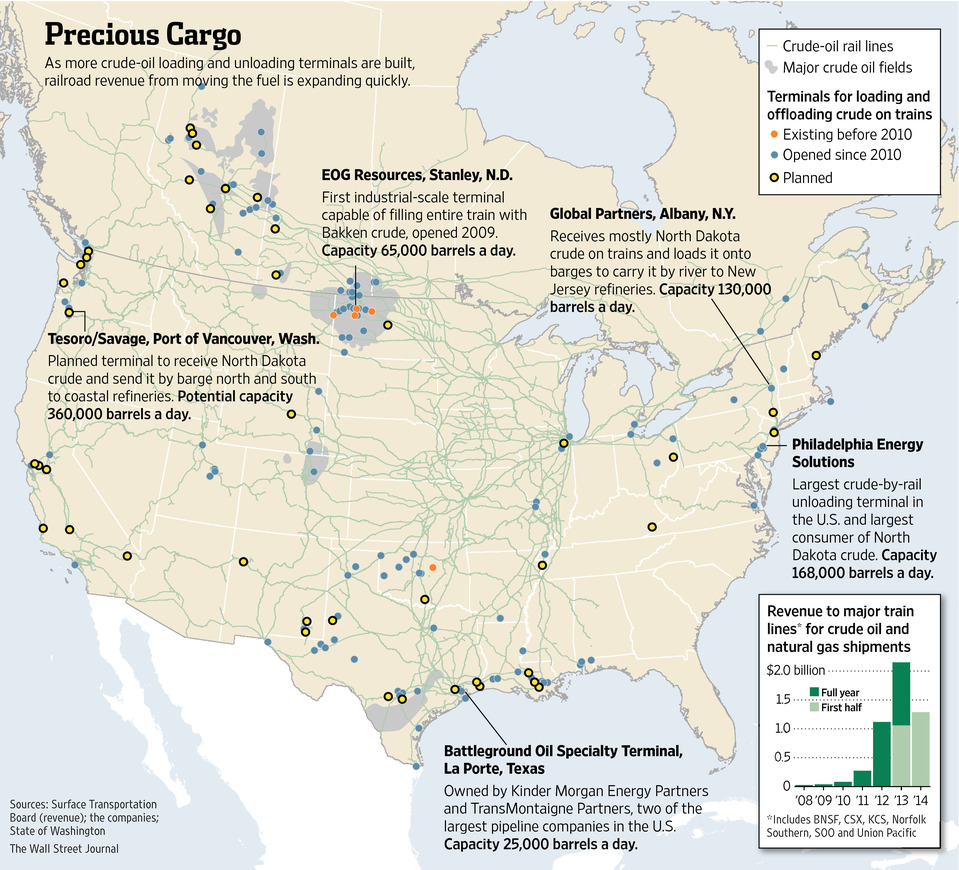 In the northern U.S. Plains, the rail system has served as the single, dependable way for farms to move grain hundreds of miles to ports and markets. But a cold winter and competition from oil producers have made farmers in North and South Dakota, Montana and Minnesota hold the largest grain stocks in years. Some farmers have switched their spring crops from corn to wheat because corn takes up more space in silos than wheat, while others are incurring the extra costs to truck their harvest to market.

The delays have contributed to an accumulation of huge stocks of corn and wheat, with North Dakota’s corn stocks reaching a record of more than 192 million bushels on March 1 and wheat stocks at their largest in three years. According to the New York Times, as of August 22, the Burlington Northern Santa Fe Railway had a backlog of 1,336 rail cars needed to carry agricultural products and the Canadian Pacific Railroad had a backlog of almost 1,000 cars.[v]

Due to increased oil production, insufficient pipeline capacity and challenges associated with siting new pipelines, a substantial amount of the oil produced in the Bakken region is shipped by rail despite the fact that pipelines are more efficient, cheaper, and generally safer. Rail is also moving oil from the Permian Basin in Texas, the Niobrara in Colorado and from Canada. America’s rail network has clearly provided a stopgap measure to help deliver oil from new production areas to markets, which some believe will become a permanent phenomenon. However, in order for all aspects of the economy to benefit, the United States needs to continue to build pipelines to move crude from new oil production areas, not just for the sake of the oil boom, but for the sake of rail’s other customers.