President Obama spoke at the U.N. to try to build support for all nations to reduce carbon dioxide emissions, but developing countries show no signs of reducing energy use and consigning billions of their inhabitants to a dismal, poverty-filled future. 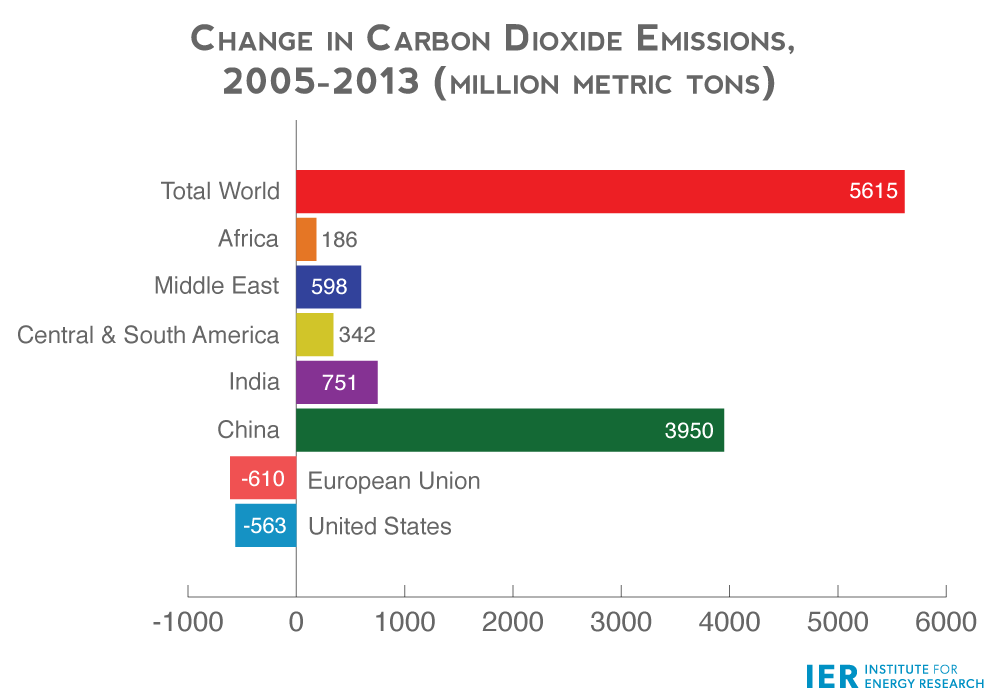 Why Carbon Dioxide Emissions Fell in the United States

The U.S. transportation sector contributed more than 25 percent to the reduction in U.S. carbon dioxide emissions between 2005 and 2013 as Americans started driving less when gasoline prices hit highs in 2008 and continued the decline due to high gasoline prices throughout the Obama Presidency. President Obama is taking credit for this reduction in carbon dioxide emissions due to the increase in corporate average fuel efficiency standards that he championed setting an average fuel economy standard equivalent to 35.5 miles per gallon[iii] in 2016 and 54.5 miles per gallon in 2025.[iv] While the earlier increases have taken effect, the average on the road vehicle efficiency has not increased since 2008,[v] making it unclear whether Americans actually intend to purchase the higher efficiency vehicles. According to this article, Americans still prefer trucks and SUVs to small efficient vehicles.[vi] Further, as the Bureau of transportation Statistics reports, between 2008 and 2012, the average fuel consumed per light duty vehicle increased 11 percent.[vii]

Ford recently hinted to its investors that the costs to add hybrid systems or lower the weight of vehicles in order to meet fuel economy standards could not be fully covered by pricing vehicles higher. According to Raj Nair, Ford’s product development chief, “The market demand for fuel economy is not matching the regulatory demand for fuel economy.”[viii] That is a nice way of saying the government is forcing auto manufacturers to develop cars people do not want to buy.

President Obama, realizing that without India, it will be more difficult to reach a lasting agreement on a global climate treaty, recently hosted India’s newly elected Prime Minister Narendra Modi , who did not attend the U.N. climate summit. Mr. Obama and Prime Minister Modi reached an agreement on measures intended to accelerate India’s shift to renewable fuels and to reduce emissions of hydrofluorocarbons (HFCs), the chemical refrigerants used in air conditioners and home appliances. Part of the agreement entailed the Obama administration clearing the way for $1 billion in financing from the U.S. Export-Import Bank to help India purchase American technology for renewable energy projects. According to the White House, other measures would expand U.S.-Indian cooperation on improving air quality and energy efficiency, and on helping coastal cities prepare for flooding and other weather-related disasters. [x]

Despite Prime Minister Modi being an advocate of solar energy, having championed the country’s large Gujarat Solar Park, he faces pressure to accelerate India’s economic development by providing reliable electricity to its 1.2 billion citizens. Like China, India is rapidly building coal-fired generators, which has led to large increases in carbon dioxide emissions and reluctance by Indian officials to commit to reductions.

China Wants to Provide Energy to Grow Their Economy

Chinese president Xi Jinping was also absent from the U.N. summit, sending Vice Premier Zhang Gaoli as his envoy. The biggest commitment China made at the summit was its pledge to provide $6 million to promote South-South cooperation on climate change and the doubling of its annual financial support for the South-South cooperation fund. China also restated its commitment to reduce carbon intensity (carbon dioxide emissions per unit of GDP) by 40 to 45 percent from 2005 levels by 2020. Vice Premier Zhang would not make any post-2020 commitments and he refused to set a date when China’s greenhouse gas emissions would hit a peak. It is likely that China will not provide any post 2020 commitments until 2016 when it releases its 13th Five Year Plan. China’s economy is vulnerable and the country is not interested in taking on new economic stressors.[xi]

Despite being a developing country, China is the world’s largest emitter of carbon dioxide. China believes it has a “right” to develop its economy as the developed world has already done, which leads to higher emissions. Coal consumption in China is at 4 billion tons, more than 4 times the amount that the United States consumes. Coal use has skyrocketed in China in concert with its industrialization. But, China releases less per capita emissions than many developed countries: China’s per capita emissions are 7 metric tons, while the United States releases 17 metric tons per person and Australia releases 16 metric tons per person.[xii] However, China has just surpassed the European Union in annual greenhouse gas emissions per capita.[xiii]

The European Union brought nothing new to the table at the most-recent U.N. summit despite being gung-ho regarding combating climate change from Kyoto Protocol ratification days. Europe is in turmoil as economies have grown stagnant, unemployment and electricity rates have skyrocketed, and taxes and welfare costs have increased. Public support for a united Europe has fallen sharply. European policies to curb carbon dioxide emissions and to rapidly convert to renewable energy are not working. Not long ago, Germany was seen as an example to model. But German growth rates have plummeted, going negative in the last quarter. Additional stagnation can be expected as energy costs surge and key export markets begin to contract.[xiv]

The European-wide embrace of renewable energy policies has been tough particularly for manufacturers. Under Chancellor Merkel, Germany has embraced a massive shift to renewable energy that has raised electricity costs for companies by 60 percent over the past five years as subsidy costs are passed onto consumers. They are now more than double the rates in the United States. Germany has had to increase its use of coal to make up for shortfalls created by shuttering nuclear plants and overreliance on unreliable, intermittent renewable power. Ultimately, high energy prices tend to fall painfully on the middle and working classes in the form of higher electricity bills. Further, unemployment rates will increase more as companies move offshore to reap the benefits of lower energy costs.

It is no wonder that German Chancellor Merkel did not attend the U.N. Summit.[xv] Europe’s disastrous policies should serve as a message for the United States to avoid.

President Obama wants the United States to model its energy policies based on European policies. But, those policies have not worked. Rather, the United States has reduced its greenhouse gas emissions by more than any other country in the world over the last 8 years, without the escalating energy costs and unemployment rates that have racked Europe. But, President Obama is not sufficiently satisfied with that milestone and is imposing further regulations on energy companies that will do little to offset the greenhouse gas emission increases of the developing world, particularly China and India. With gasoline prices over $3.00 a gallon and electricity prices to households on the increase this year[xvi], President Obama would do well to retire his Administration’s proposed environmental regulations before the United States ends up like Europe – with dwindling support for a unified country.

[i] Washington Times, Fracking is the Answer to Global Warming, September 26, 2014, http://www.washingtontimes.com/news/2014/sep/26/moore-fracking-is-the-answer-to-global-warming/#ixzz3EjiOWpYc

ICYMI: Yes We Can Drill Ourselves to Secure and Affordable Energy