Unlike more charismatic creatures like polar bears, pandas, or wolves, bats are not sympathetically portrayed by popular culture or by most environmental groups. But bats are actually critical consumers of harmful pests that feed on crops. In fact, the U.S. Geological Survey (USGS) estimates that bats provide about $23 billion in benefits to America’s agricultural industry each year.

Wind turbines, however, killed almost 900,000 bats last year alone, according to a recent paper published in the Wildlife Society Bulletin. Meanwhile, some who work directly with the wind industry to reduce bat deaths at wind facilities have described the industry’s response as “mixed” and “unsustainable.”

Paul Cryan of the USGS stated “that bats are saving us big bucks by gobbling up insects that eat or damage our crops. It is obviously beneficial that insectivorous bats are patrolling the skies at night above our fields and forests—these bats deserve help.”

Wind facilities harm bats in at least two ways. First, turbine blades cut down bats. But perhaps surprisingly, bats can also be killed by simply flying near turbines, a phenomenon known as barotrauma. As the U.K.’s Bat Conservation Trust explains, when bats fly too close to wind turbines, sudden drops in air pressure near the turbines can cause bats’ internal organs to “pop.”

Wind turbines pose such a serious threat to bats—and the agricultural community—that the USGS has developed an active research project to investigate bat fatalities at wind facilities. The following map, included in the USGS study cited above, shows which regions benefit the most from bats, as well as who stands to lose the most from bat deaths. 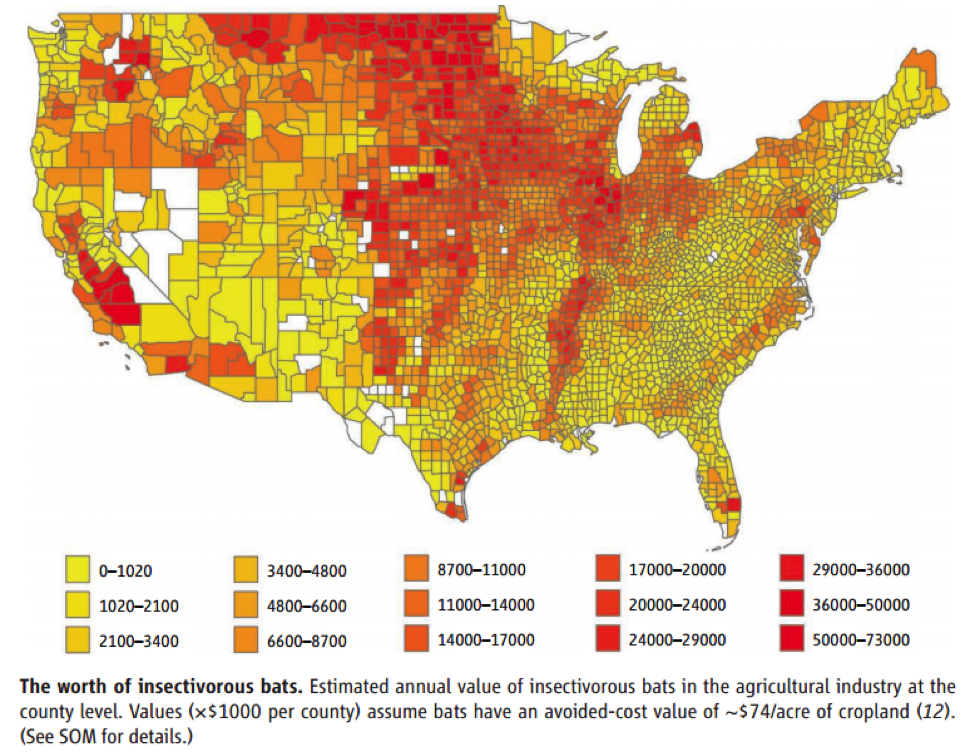 The wind industry claims they are actively working to curtail bat fatalities at wind facilities. For instance, the American Wind Energy Association (AWEA) points out that they joined the Bats and Wind Energy Cooperative (BWEC) in 2003 as a joint effort between Bat Conservation International, AWEA, and various government agencies.

Bat Conservation International supports the development of alternative energy sources. But we believe that the rate of bat fatalities may be unsustainable if wind facilities continue operating without more careful planning.

Is the wind industry cooperating?

Response from the wind-energy industry has been mixed. While we applaud those companies working with conservation organizations and state and federal agencies to solve these issues, additional immediate action is needed to expand and improve cooperation and involvement. The wind industry and financiers of wind projects must increase efforts to support responsible development of wind energy that protects wildlife resources. [emphasis added]

As with last week’s article highlighting the mining and use of rare earths, our goal here is to point out that nearly all activities have some direct impact on the environment, and the environmental impact of the wind industry is often overlooked. Further, as policymakers and citizens continue to weigh the costs of direct subsidies to the wind industry, such as state-level mandates and the federal wind Production Tax Credit (PTC), it is important to keep these environmental impacts in mind.

The wind industry has enjoyed rapid expansion in recent years, thanks largely to generous subsidies and mandates including the PTC, which is set to expire at the end of the year. This expansion of wind capacity, however, coincides with growing environmental impacts. For instance, almost a million bats were killed last year at wind facilities across the country. While wind lobbyists claim their industry cares about reducing bat fatalities at wind facilities, even groups that have allied with the wind industry describe their efforts as “mixed,” “unsustainable,” and in need of “more careful planning.”

As IER has explained in previous posts, wind energy is not as “clean” and “green” as the wind lobby would have you believe. Wind turbines injure, maim, and kill hundreds of thousands of birds each year in violation of federal law—factoring in bat deaths and their impact on agriculture paints an even more complete picture of the hidden environmental and economic impacts of the wind industry.