Texas has more wind capacity than any other state in the United States. This summer shows just how little that matters. Due to the fact that wind rarely blows when it is most needed, Texas wind capacity did little to abate the heat wave that struck Texas this summer.  The state had to ready 4 natural gas-fired units that had been mothballed to compensate for the lack of wind. Making the electricity situation worse, the state is facing new regulations from the Environmental Protection Agency (EPA) that could take 8 coal-fired units off-line. That means that Texas residents must hope for cooler weather and/or windy days during future summers, or the state’s electricity consumers could be faced with brown outs and black outs.

Texas has 10,135 megawatts of wind capacity, almost 3 times more than Iowa, the state ranking second in wind capacity.[i] In Texas, wind represents about 10 percent of the total generating capacity of 103,037 megawatts.[ii] But there is a big difference between wind capacity and actual generation. The Electric Reliability Council of Texas (ERCOT) counts only 8.7 percent of wind nameplate capacity as dependable capacity at peak periods of electricity demand.[iii]  Unfortunately, wind blows more during the evening and night hours, when most consumers are asleep than when it is needed most during the day. The graph below shows ERCOT’s demand load compared to wind generated in ERCOT between  August 17 and August 24, 2011. 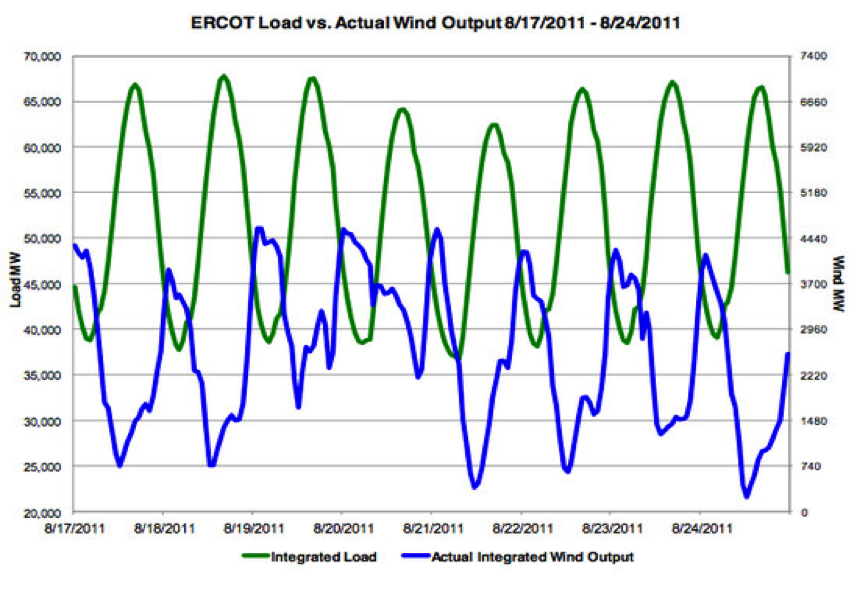 In June, ERCOT expected peak demand in Texas to be 3 percent lower than the record breaking peak demand Texas saw last summer.[i] However, Texas set a power use record on August 2 and August 4 of this year and came close to rolling blackouts for what would have been the fourth time in 21 years. ERCOT had to ask two utility companies to bring four mothballed natural-gas-fired units back on line to ensure adequate capacity to avoid rolling blackouts. Two units, owned by NRG energy with a combined capacity of 292 megawatts, were taken offline in 2010. The other two units owned by Garland Power & Light have a combined capacity of 122 megawatts. ERCOT plans to pay the costs of taking these four units out of mothballs and covering their fixed costs, such as maintenance and fuel.[ii]

Wind power also requires additional transmission lines to carry the power from remote sources of wind to demand centers in urban areas. Texas is expected to need $6.79 billion in additional transmission lines, about $270 for every Texan. That estimate is 38 percent higher than initially projected 3 years ago. According to the Texas Public Utility Commission, the charge will be an additional $4 to $5 every month on every utility bill in Texas for years to come.[iii]

According to Robert Bryce, if that $6.79 billion were spent on natural-gas fired plants instead of transmission lines, 6,900 megawatts of additional capacity could come on-line that actually had capacity value.[iv] That calculation was based on plant cost data from the Energy Information Administration indicating that a natural gas combined cycle plant costs $978 per kilowatt. [v]

Even though Texas is a leader in wind capacity, the state is having a difficult time generating enough electricity.  And it’s about to get much worse. EPA’s New Cross-State Air Pollution Rule, consisting of 1,300 pages, is designed to reduce power plant emissions from states whose emissions are said to impair the ability of other states to meet federal clean air standards. EPA added Texas to the list of states to which this rule applied in July, 2011– just months before the rule is to take effect. That means power plant owners have five months to make drastic cuts in air emissions or curtail operations. As a result of EPA’s regulations, Luminant energy has already announced that it is laying off 500 workers due to the closing of two coal-fired units in Titus. [vi]

In 2010, coal generation provided 40 percent of the state’s electricity. The new EPA rule would affect 8 of the state’s coal-fired plants, thus affecting the electric reliability in the state which is already struggling to meet summer peak loads. ERCOT concluded that the EPA rule “implementation date does not provide ERCOT and its resource owners a meaningful window for taking steps to avoid the loss of thousands of megawatts of capacity, and the attendant risks of outages for Texas power users.”[vii]

According to Sam Jones, retired president and CEO of ERCOT, “Some have suggested that Texas generation owners can simply switch to a different type of coal or build replacement plants. Even if adequate supplies of the right kind of coal can be quickly procured and transported to Texas, installing the equipment necessary to use the new fuel takes several years. Constructing new generation can take five or more years. At a minimum, both options require engineering and design, permitting, equipment procurement, and delivery, construction and startup testing. And because the rule applies to 27 states, this timeline might be lengthened by the number of projects in competition for the same skilled labor and resources.”[viii]

Texas initiated a renewable electricity mandate in 1999, requiring 2,000 megawatts of renewable capacity be built by 2009. That was followed by other targets including 10,000 megawatts of renewable capacity by 2025.[ix] Those mandates created an environment of massive wind turbine construction where Texas now has almost 3 times more wind capacity than any other state in the United States. Unfortunately, that wind capacity does not come with much capacity value since it cannot be relied on to generate electricity when needed at peak demand.  And, that wind capacity is going to require additional transmission lines to get it from distant areas to consumers in urban areas. Current estimates have the additional transmission costing electricity consumers in the state about $270 each.

To add to Texas’ problems, the EPA now wants it to make 8 coal-fired plants comply with its Cross-State Air Pollution Rule. That means adding equipment or shuttering coal-fired plants in just 5 short months from notification. Obviously, either EPA does not keep up with the energy news and Texas’ generation problems or else the agency just does not care about the comfort of U.S. citizens and the success of the state’s industrial complex.