Two islands—one off Spain and one off Australia—are using renewable energy to supply power to their homes and industries in the hopes that they can be free of fossil fuels. Tasmania, an island off the south coast of Australia, was virtually 100 percent renewable, but had to bring in diesel generators to get it through an energy crisis. El Hierro, one of the Canary Islands off of Spain, had been 100 percent diesel-powered, but turned to a hybrid wind/pumped storage hydroelectric system to replace the diesel generators, only to find that the island is still dependent on them. In each case, the cost has been huge, and should be cautionary tales to policymakers who want to tinker with the electricity systems we depend upon.

Tasmania, until recently, had generated almost all its power from renewable energy, touting its “clean, green” image. However, a number of events, including extra­ordinary weather, mismanagement, a catastrophic technical failure and a carbon tax, have put the island into an energy crisis where 20 portable diesel generators had to be rushed to the island to keep the lights on at a cost of $44 million just to set up. [i]

The 200 megawatts of diesel generators, costing up to $22 million a month to run, is insufficient to provide all the energy the island needs, so the island’s three major manufacturers have agreed to cut production to conserve power. Sixty percent of Tasmania’s 1200-megawatt average energy load is consumed by five large industrial businesses and three (Bell Bay Aluminium, Temco’s magnesium alloy factory and the Norske Skog paper mill) have agreed to cut production to save 150 megawatts in energy. Bell Bay is losing $21 million in output due to the “voluntary reduction.” Even still, further power rationing may be necessary.

The Tasmanian energy crisis was caused by an unusually extended dry period (record low rainfall from September through December 2015) and a protracted failure in the 290-kilometer undersea cable that allows the trading of power ­between Tasmania and the ­mainland, providing Tasmania with up to 40 percent of its power. On December 20, a fault severed Tasmanian imports of power from Victoria. The owners of the cable think they have finally located the cable fault, 98 kilometers off the Tasmanian coast. Replacing the faulty section could take until late May. Fixing the cable, which includes some telecommunications lines, has caused another problem–very slow ­internet speeds for thousands of internet customers.

Australia’s carbon tax is also part of the problem, because large volumes of hydroelectric power were exported to the mainland when the carbon tax was in place, maximizing profits for the utility, but also lowering dam levels. Tasmania’s hydroelectric dams, which were once a large source of inexpensive power, are being depleted, with storage levels recently falling to a record low of 14.8 percent. (Dam storage was drawn down from 50.8 percent in November 2013 to 27.9 percent in July 2014. Once the carbon tax was repealed, storage levels were allowed to rise, reaching 34 percent in ­November 2014, and falling since then, as power was still being exported.)

Mismanagement was also a factor, in that last August, a gas turbine plant capable of producing 208 megawatts of baseload power, which was considered a “redundant liability,” was ordered to be decommissioned and sold. The combined cycle gas turbine (CCGT), located in the Tamar Valley in the northern part of Tasmania, was considered an expensive liability. The utility, in a news release on August 12, assured the public that it had “undertaken extensive modeling and confirmed that the CCGT is not required for energy security”. The modeling, however, turned out to be optimistic. Because the plant was not sold, it was reactivated in January to help supply needed power, but was insufficient to handle the demand given the numerous problems.

It was recently announced that Tasmania would ramp up a cloud-seeding campaign–a technique that involves dropping silver iodide particles from a plane—to produce rain. It will begin a month earlier than usual at a cost of $100,000. It’s unclear how much extra rain it might produce.[ii]

For the longer-run, Tasmania wants to build a second cable to solve the security issue, but it is unclear whether the mainland will be willing to help pay for it.

El Hierro, the most westerly of the Canary Islands, had, for many years, produced its electricity from an 11.36 megawatt diesel plant, supplying 10,920 residents of the tourist island. On June 27, 2014, the island replaced its diesel-fired generation with hydro and wind, planning to save €1.8 million ($2 million) in fuel costs each year. It was hailed as an example of sustainable development.[iii] [Note: the blog Energy Matters has followed this situation very closely.]

The island built a hybrid wind power and pumped hydro storage system and combined them in a way that is opposite to which these technologies are usually used. Instead of the pumped hydro being used as load-following backup for the wind power, the wind power is used to keep the pumped hydro reservoirs full, allowing the hydro plant to function as a baseload and load-following generation source. The system has three components—a 5-turbine, 11.5 megawatt wind farm; a 380,000 cubic meter upper pumped hydro reservoir located at an inactive volcanic crater at 709.5 meters elevation; and a lower 150,000 cubic meter reservoir at 56 meters elevation. The hydro plant has a capacity of 11.3 megawatts.

Capital costs for the system are cited as €84 million (€7,300/kilowatt installed) or $94 million ($8,200/kilowatt installed).[iv] The Spanish government financed part of that cost. The graph below compares the capital costs for the wind/hydroelectric hybrid system on a kilowatt basis compared to those of other generating technologies in the United States, based on modeling assumptions of the Energy Information Administration (EIA) for its Annual Energy Outlook 2015. EIA’s capital costs are for 2014 in 2013 dollars per kilowatt. The year dollars of the wind/hydroelectric hybrid system are not known, but may be in comparable dollars since the system went online in 2014. 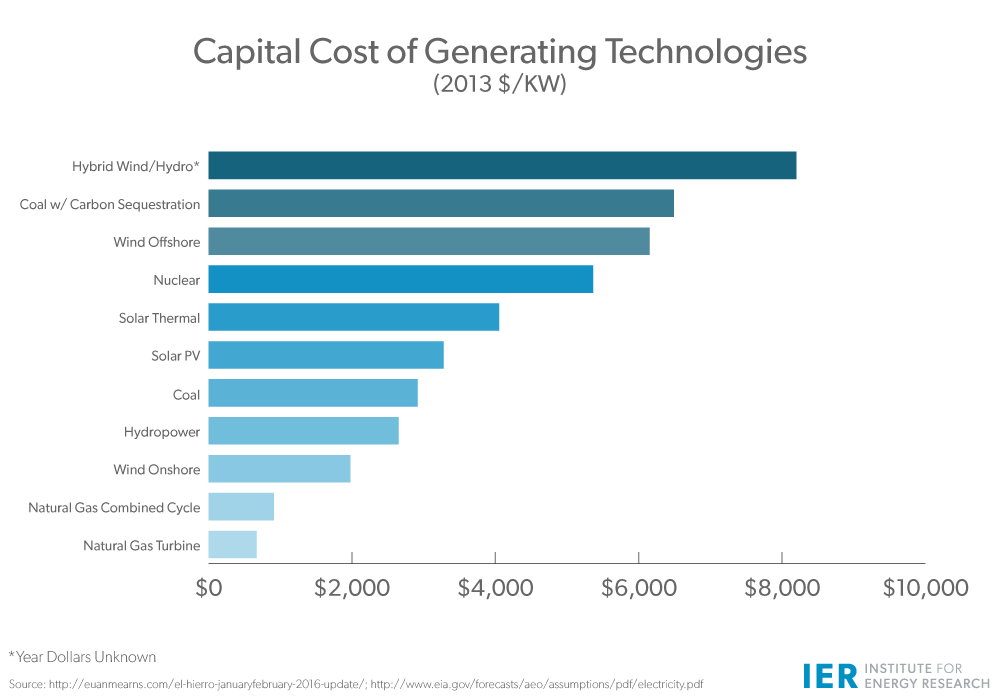 Annual demand on the island is 47.4 gigawatt hours. For the wind farm to produce the necessary power, it would have to run at a load factor of 49 percent.

The first year the plant went on-line was devoted to initial testing, and as a result, approximately 95 percent of El Hierro’s electricity had to be supplied by diesel generation over this period. Full operation began late June of 2015. Between June 27 and August 30, the diesel/renewables split was about 50/50–far short of the 100 percent renewables generation that was expected. Between June 25 and August 30, 2015, the system produced an average of 2.7 megawatts, which results in a capacity factor of 23 percent.[v]

Generation was highest during the high-wind period that extended through June, July and most of August, but fell off to low levels during the low-wind period that occurred in September, October and most of November. Generation improved during higher-wind intervals in November, December, and January but did not regain July levels.[vi] February, however, proved to be a better month, getting closer to the output of August. (See graph and table below.)

To be 100 percent renewable, the wind component would need to be expanded, adding more cost to the system. Even then, the diesel generators would need to be kept for emergencies and down time for maintenance of the wind turbines. This produces redundancy and cost.

The hybrid renewable system of El Hierro is expensive, inefficient and commercially unviable. Clearly, fossil fuel generation would be simpler and cheaper. Instead of acting as a flagship project to demonstrate the feasibility of 100 percent generation from intermittent renewable sources, it has highlighted the difficulties involved in achieving it.

Neither Tasmania nor El Hierro are able to provide electric power without using fossil fuels. And, in Tasmania’s case, the institution of a carbon tax in Australia exacerbated its energy crisis. In both cases, trying to move toward 100 percent renewable energy has been very expensive.

Coal Continues to Struggle at Hands of Federal Government