The popular narrative in the major media and coming from most public intellectuals is that President Trump’s withdrawal from the Paris Climate Agreement represents a flat denial of basic science that threatens the survival of humanity itself. Furthermore—so the popular critique goes—Trump’s official reasons for withdrawal make no sense, since the Agreement was non-binding and therefore didn’t constrain US policy in any way.

In a series of posts here at IER, I will document just how nonsensical this popular narrative is. As we will see, the Paris Climate Agreement was not integral to “saving the planet,” even if we rely solely on the conventional computer forecasts of climate change and its impacts as codified by the UN’s IPCC reports. Moreover, even if it were true that aggressive government action were needed to avert catastrophe, then the Paris Agreement wasn’t the solution—as even its fans admit.

In sum, whether one is relaxed or terrified at the prospect of climate change, US participation with the Paris Agreement is a red herring. It was a largely symbolic ritual, with the only guaranteed tangible result being hundreds of billions of dollars being transferred among governments.

The “Paris Agreement” or “Paris climate accord” is an international arrangement adopted in December 2015 under the auspices of the United Nations Framework Convention on Climate Change (UNFCCC). Its overarching purpose is, “Holding the increase in the global average temperature to well below 2°C above pre-industrial levels and to pursue efforts to limit the temperature increase to 1.5°C above pre-industrial levels…”

To this end, each participating country submitted an Intended Nationally Determined Contribution (INDC), which is a non-binding pledge on how that country would do its part to achieve the global goal. To repeat, the INDCs were non-binding, in the sense that there are no penalties for noncompliance.

In addition to the grand goal and the INDCs that (ostensibly) should represent the components necessary to achieve it, the Paris Agreement also included a mechanism by which the richer nations would transfer $100 billion annually, from 2020 through 2025, to the developing countries, in order to help them afford the transition to lower emissions as well as to adapt to the damages of climate change.

For its part, the Obama Administration committed to “achieve an economy-wide target of reducing its greenhouse gas emissions by 26-28 per cent below its 2005 level in 2025 and to make best efforts to reduce its emissions by 28%.”

In this context, President Trump announced on June 1 that the US was withdrawing from the Paris Agreement, arguing that it sapped American sovereignty while hamstringing the US economy. Predictably, commentators across the board were aghast at the “science denial” and failure to understand the workings of the Agreement that were allegedly behind Trump’s decision. (Try here and here for examples, but dozens more could be cited.)

In the first place, let’s be clear on why it’s the Paris Agreement and not the Paris Treaty or the Paris Protocol. The reason is that the advocates of coordinated government intervention in the name of fighting climate change learned their lesson from the Kyoto Protocol (not to mention the failure of domestic cap-and-trade legislation): it was going to be very difficult to get the US Congress to agree on stringent emission limits.

Keep this in mind when critics browbeat Trump for reneging on “American promises” or “US obligations”; the Paris Agreement was deliberately designed to avoid the US Senate having a say. I like the way Jeff Tucker at FEE put the matter:

…President Obama came home from the Paris meetings to the acclaim of all the right people. He alone had made the responsible choice on behalf of the entire country: every business, every worker, every consumer, every single person living within these borders who uses some measure of this thing we call energy….

The exuberant spokespeople talked about how “the United States” had “agreed” to “curb its emissions” and “fund” the building of fossil-free sectors all over the world. It was strange because the “United States” had not in fact agreed to anything: not a single voter, worker, owner, or citizen. Not even the House or Senate were involved. This was entirely an elite undertaking to manage property they did not own and lives that were not theirs to control.

And so we see the flimsiness of the claim that President Trump’s decision is a petty, personal impulse that rejects the authority of the United States or international law. Since the pro-Paris crowd put all their eggs in the basket of the Obama Administration, they shouldn’t be shocked when the next Administration reverses the decision.

There are several problems with the claim that US participation in the Paris Agreement is necessary for “leadership.” First of all, as the critics themselves admit, the Agreement had no penalties for noncompliance. So even on their own terms, technically Trump could’ve simply ignored the “intentions” announced by the Obama Administration, and European statesmen would have had nothing they could do. So in what sense would this have been more mature and diplomatic than Trump’s decision, which was to straightforwardly announce that he thought his predecessor had erred?

We see here the fundamental inconsistency in the descriptions put forth by the pro-Paris crowd: On the one hand, they argued that it was a historic agreement, one of the crowning achievements of the Obama Administration (and other governments), which was a vital part of humanity’s response to climate change.

Yet on the other hand, when President Trump says the costs outweigh the benefits for the US, the critics argue that the Paris Agreement was just a non-binding pledge and so there’s no point to pulling out; no big whoop. How can one possibly reconcile these two views?

These analogies are never perfect, but let’s try this one: Imagine a wife agrees that she and her husband will go on a vacation with their friends, and she verbally commits to splitting the cost of the beach house rental. Then the wife tells her husband what she did, and he says, “No way, that’s too expensive for us right now, I’ll call and cancel.” But the wife objects and says, “I didn’t actually sign a contract with them. Let’s still go on the trip, and when they ask us to pay our share of the bill, we’ll point out they can’t force us to, legally.” In this analogy, clearly the wife’s strategy is duplicitous; it is better for the husband to outright cancel the trip, even if the other couple has started making plans and will be really upset at the flip-flop. If the husband and wife have no intention of following through on her verbal pledge, better to let everybody know that upfront than to go on the vacation and have their friends guilt trip them the entire time.

Beyond all of this, the other wrinkle in this “it’s non-binding” pro-Paris argument is that US environmental groups could have cited the Obama Administration’s commitment while suing to stop energy projects. So even if it is true that other governments can’t take punitive action against the US for failing to live up to the INDC, it still might have constrained domestic energy development if the Trump Administration formally stays in the Paris Agreement.

Yet there are other problems with the claim that the US needs to exercise “leadership.” For example, we see some critics warning that by getting out of the emission-limiting race, the US would lose out on the growing field of renewables technology. Well, if the critics actually believe that, then we have no reason to suppose that China, Germany, and other “clean energy” pioneers will alter course just because of Trump’s decision.

Finally, standard models of climate change and projections of emissions show that the US is going to be a minor player going forward. For example, consider this scenario which I explained in a previous IER post: 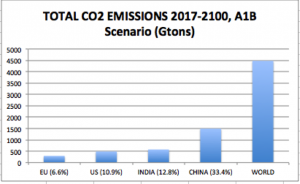 China has already surpassed the United States in CO2 emissions, and that disparity will only increase as the populous country continues to catch up in economic development.

The popular narrative concerning the Paris Agreement makes no sense. As Trump’s critics themselves point out, the agreement had no penalties, so his decision (on their own terms) didn’t do anything except honestly state what would happen. The Agreement was specifically designed to avoid input from the representatives of the American people in the form of Congress.

Furthermore, for those critics[1] who argue that cutting back on emissions will help individual countries by boosting their renewables sectors, they shouldn’t worry about other countries pulling out of the Agreement. By these critics’ own arguments, the countries staying inside the Agreement will benefit all the more so from the alleged myopia of the US. So if instead, we see that the US pulling out leads to a domino effect, then these particular critics must have been wrong, and Trump was right when he claimed that participating in the Paris Agreement would hurt the US economy.

Finally, standard projections of emissions scenarios show that the US is going to be subordinate to China and India going forward. The US doesn’t need to “exercise leadership” when it comes to global climate agreements, except insofar as American taxpayers are expected to foot the bill.

[1] In the main text I write “for those critics” because not all proponents of the Paris Agreement are being inconsistent in this way. For example, many of them would agree that the emission pledges make individual countries poorer, but think that if all countries follow through, then they will all be better off (because of mitigated climate change). That is a separate argument that I will address in Part 2 of this series. In the main text, I am dealing with people who inconsistently claim that we need US leadership in this arena, and that the US economy would actually have been helped by the stimulus to “green energy” from mandated emission cuts.

Green Technologies Cannot Survive in the Marketplace without Subsidies

The Wind Lobby's Preemptive Strike on the Perry Grid Study