Green technologies (e.g., wind, solar and electric vehicles) cannot compete in the marketplace without subsidies or other favorable government policies.

In Nevada, for example, when the government modified its policy to pay customers less for excess power produced by rooftop solar systems, solar installers left the state for others providing more favorable net metering policies. With its solar installations down, Nevada’s legislature recently passed a net metering bill, which the Governor is expected to sign, that brings back net metering at a slightly discounted rate.

Besides net metering, many states have renewable portfolio standards that require a certain percentage of their generation to come from renewable energy by a specified date. These state measures—along with federal government subsidies such as the production tax credit for wind, the investment tax credit for solar and the tax credit for purchasing electric vehicles—provide lasting incentives that are pushing green technologies into the U.S. marketplace. These technologies would not have grown to today’s levels without these incentives. It is important to realize that the incentives are costing consumers and taxpayers more than the alternatives would.

Nevada’s new bill (AB 405), if signed, will allow rooftop solar customers to be reimbursed for excess generation beginning at 95 percent of the retail electricity rate. Over time, the customers’ compensation would decline to a floor of 75 percent of the retail rate. If signed by the Governor, the bill would create four tiers, where credit rates decrease in 7 percent increments for every 80 megawatts of rooftop solar. Since 80 megawatts of solar panels can be deployed in each tier, it is expected to take years to reach the 75 percent floor. In Nevada’s largest solar installation year the state deployed around 100 megawatts of rooftop solar.

AB 405 allows net-metered customers to lock in their rate for at least 20 years, which is another feature of many renewable energy incentives. The bill contains several consumer protections such as a requirement that solar companies offer a 10-year warranty and provide transparent information so that consumers can calculate their savings. The legislation also ensures that net metering will continue even if Nevada decides to deregulate the state’s electricity market. And, the bill mandates that residential solar and energy storage customers cannot be treated as a separate rate class, eliminating the option of instituting higher fees.

The federal Production Tax Credit (PTC) for wind provides a tax credit for wind units during their first ten years of operation. It has expired and extended 10 times and is now set to expire at the end of 2019. This year, the subsidy is 20 percent less than its level last year of 2.3 cents per kilowatt-hour. In 2018, it will be 40 percent less, and in 2019, 60 percent less.[ii] The credit is so lucrative that wind operators can, and sometimes do, accept a negative price during periods of low demand in order to wipe out the competition. According to a Congressional Research Service study, the PTC is the largest 2016 to 2020 energy-related tax expenditure cost to the Treasury at $25.7 billion.[iii] 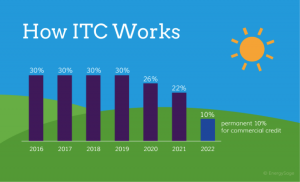 The federal tax credit for electric vehicles is based on battery size and can be as large as $7,500. It is given to the purchaser of the vehicle and to the manufacturer if it is a leased vehicle. The electric vehicle tax credits are phased out as sales volume increases. The expiration date differs by manufacturer and comes only after an auto manufacturer sells 200,000 qualified vehicles, which no manufacturer has achieved yet. The following table provides a list of tax credits for some popular models as of April 2017.[v]

Despite these lucrative tax credits and state renewable programs, the penetration of green technologies has been limited. Wind generates only 5.6 percent of our electricity, utility scale solar less than 1 percent. Rooftop solar systems provide another half of a percent based on estimates of the Energy Information Administration. And, despite former President Obama’s desire to have 1 million electric vehicles on the road in 2015, less than half that number was achieved. While sales of electric vehicles continue, through November 2016, only 542,000 electric vehicles were sold in the United States.[vi]

There are many lucrative subsidies and government programs for green technologies—several of which have been highlighted above. These programs cost consumers and taxpayers more than the alternatives available to the market place and often are regressive policies, particularly in the case of rooftop solar systems and electric vehicles which are purchased by higher income consumers, who can afford them.